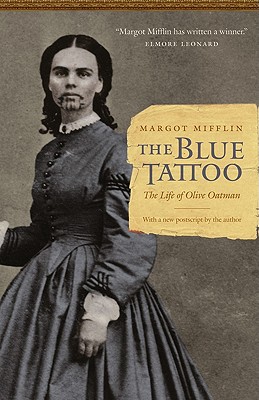 Series: Women in the West

2019 Tucson Weekly 40 Essential Arizona Books pick
2014 One Book Yuma selection
2010 Best of the Best from the University Presses (ALA) selection
2010 Caroline Bancroft History Prize Finalist
2009 Southwest Book of the Year In 1851 Olive Oatman was a thirteen-year old pioneer traveling west toward Zion, with her Mormon family. Within a decade, she was a white Indian with a chin tattoo, caught between cultures. The Blue Tattoo tells the harrowing story of this forgotten heroine of frontier America. Orphaned when her family was brutally killed by Yavapai Indians, Oatman lived as a slave to her captors for a year before being traded to the Mohave, who tattooed her face and raised her as their own. She was fully assimilated and perfectly happy when, at nineteen, she was ransomed back to white society. She became an instant celebrity, but the price of fame was high and the pain of her ruptured childhood lasted a lifetime. Based on historical records, including letters and diaries of Oatman's friends and relatives, The Blue Tattoo is the first book to examine her life from her childhood in Illinois--including the massacre, her captivity, and her return to white society--to her later years as a wealthy banker's wife in Texas. Oatman's story has since become legend, inspiring artworks, fiction, film, radio plays, and even an episode of Death Valley Days starring Ronald Reagan. Its themes, from the perils of religious utopianism to the permeable border between civilization and savagery, are deeply rooted in the American psyche. Oatman's blue tattoo was a cultural symbol that evoked both the imprint of her Mohave past and the lingering scars of westward expansion. It also served as a reminder of her deepest secret, fully explored here for the first time: she never wanted to go home.
Purchase the audio edition.