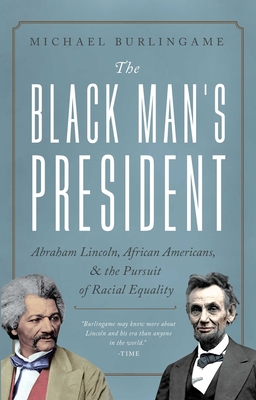 Frederick Douglass called the martyred president emphatically the black man's president as well as the first who rose above the prejudice of his times and country. This narrative history of Lincoln's personal interchange with Black people over the course his career reveals a side of the sixteenth president that, until now, has not been fully explored or understood. In a little-noted eulogy delivered shortly after Lincoln's assassination, Frederick Douglass called the martyred president emphatically the black man's president, the first to show any respect for their rights as men. To justify that description, Douglass pointed not just to Lincoln's official acts and utterances, like the Emancipation Proclamation or the Second Inaugural Address, but also to the president's own personal experiences with Black people. Referring to one of his White House visits, Douglass said: In daring to invite a Negro to an audience at the White House, Mr. Lincoln was saying to the country: I am President of the black people as well as the white, and I mean to respect their rights and feelings as men and as citizens. But Lincoln's description as emphatically the black man's president rests on more than his relationship with Douglass or on his official words and deeds. Lincoln interacted with many other African Americans during his presidency His unfailing cordiality to them, his willingness to meet with them in the White House, to honor their requests, to invite them to consult on public policy, to treat them with respect whether they were kitchen servants or leaders of the Black community, to invite them to attend receptions, to sing and pray with them in their neighborhoods--all those manifestations of an egalitarian spirit fully justified the tributes paid to him by Frederick Douglass and other African Americans like Sojourner Truth, who said: I never was treated by any one with more kindness and cordiality than were shown to me by that great and good man, Abraham Lincoln. Historian David S. Reynolds observed recently that only by examining Lincoln's personal interchange with Black people do we see the complete falsity of the charges of innate racism that some have leveled against him over the years.

Roll, Jordan, Roll: The World the Slaves Made

Stony the Road: Reconstruction, White Supremacy, and the Rise of Jim Crow

Lincoln's Lieutenants: The High Command of the Army of the Potomac

Eyewitness to the Civil War: The Complete History from Secession to Reconstruction

A World on Fire: Britain's Crucial Role in the American Civil War

This Republic of Suffering: Death and the American Civil War

Forever Free: The Story of Emancipation and Reconstruction

The Civil War: A Narrative: Volume 1: Fort Sumter to Perryville

W.E.B. Du Bois: Black Reconstruction (Loa #350): An Essay Toward a History of the Part Whichblack Folk Played in the Attempt to Reconstructdemocracy i

Free Papers: inspired by the testimony of Eliza Winston, a Mississippi slave freed in Minnesota in 1860

The Impeachers: The Trial of Andrew Johnson and the Dream of a Just Nation

The Forgotten History of America: Little-Known Conflicts of Lasting Importance from the Earliest Colonists to the Eve of the Revolution

The President and the Freedom Fighter: Abraham Lincoln, Frederick Douglass, and Their Battle to Save America's Soul

Ways and Means: Lincoln and His Cabinet and the Financing of the Civil War

Lincoln and the Fight for Peace

The Broken Constitution: Lincoln, Slavery, and the Refounding of America

The Half Has Never Been Told: Slavery and the Making of American Capitalism

The Nation That Never Was: Reconstructing America's Story

The Civil War In My South Carolina Lowcountry

Nothing Like It in the World: The Men Who Built the Transcontinental Railroad 1863-1869

Ends of War: The Unfinished Fight of Lee's Army After Appomattox

The Agitators: Three Friends Who Fought for Abolition and Women's Rights

Books on the American Civil War Era: A Critical Bibliography

His Greatest Speeches: How Lincoln Moved the Nation

The Emancipation Circuit: Black Activism Forging a Culture of Freedom

The Civil War In My South Carolina Lowcountry

A House Built by Slaves: African American Visitors to the Lincoln White House

The Heart of Hell: The Soldiers' Struggle for Spotsylvania's Bloody Angle

Abe: Abraham Lincoln in His Times

The Second Founding: How the Civil War and Reconstruction Remade the Constitution

Diary of a Contraband: The Civil War Passage of a Black Sailor

No Common Ground: Confederate Monuments and the Ongoing Fight for Racial Justice

Confederates in the Attic: Dispatches from the Unfinished Civil War

The President and the Freedom Fighter: Abraham Lincoln, Frederick Douglass, and Their Battle to Save America's Soul (Large Print Edition)

The Zealot and the Emancipator: John Brown, Abraham Lincoln and the Struggle for American Freedom

Fields of Honor: Pivotal Battles of the Civil War

Atlas of the Civil War: A Complete Guide to the Tactics and Terrain of Battle

Be Free or Die: The Amazing Story of Robert Smalls' Escape from Slavery to Union Hero

The Atlas of the Civil War

Tales from the Haunted South: Dark Tourism and Memories of Slavery from the Civil War Era

The Republic of Violence: The Tormented Rise of Abolition in Andrew Jackson's America

Destruction of the Steamboat Sultana: The Worst Maritime Disaster in American History

In the Waves: My Quest to Solve the Mystery of a Civil War Submarine

The History of the 118th Ohio Volunteer Infantry XXIIIrd. Corps: Where the grim cannon frown and the bayonets gleam

A Misplaced Massacre: Struggling Over the Memory of Sand Creek

Hymns of the Republic: The Story of the Final Year of the American Civil War

It Wasn't about Slavery: Exposing the Great Lie of the Civil War

The Black Civil War Soldier: A Visual History of Conflict and Citizenship

Race and Reunion: The Civil War in American Memory

The Legacy of the Civil War

Lincoln in Private: What His Most Personal Reflections Tell Us about Our Greatest President

Lincoln in Private: What His Most Personal Reflections Tell Us about Our Greatest President

To Rescue the Republic: Ulysses S. Grant, the Fragile Union, and the Crisis of 1876 (Large Print Edition)

The Lincoln Conspiracy: The Secret Plot to Kill America's 16th President--And Why It Failed

The Red Badge of Courage

David Walker's Appeal to the Coloured Citizens of the World

War In The Mountains: The Macbeth Light Artillery at Asheville, NC 1864-1865

Lincoln's Mentors: The Education of a Leader

What to the Slave Is the Fourth of July?

America, Empire of Liberty: A New History of the United States

The Women's Fight: The Civil War's Battles for Home, Freedom, and Nation

The Lincoln Conspiracy: The Secret Plot to Kill America's 16th President--And Why It Failed

The Republic for Which It Stands: The United States During Reconstruction and the Gilded Age, 1865-1896

Sweet Taste of Liberty: A True Story of Slavery and Restitution in America

The Field of Blood: Violence in Congress and the Road to Civil War

Altars to Amputations: From Gettysburg Churches to Battlefield Hospitals: A History and Walking Tour

Searching for Black Confederates: The Civil War's Most Persistent Myth

Slave Narratives of the Underground Railroad

Riders in the Storm: The Triumphs and Tragedies of a Black Cavalry Regiment in the Civil War

The Crooked Path to Abolition: Abraham Lincoln and the Antislavery Constitution

A Union Soldier in Savannah and the Carolinas: A Love and Valor Chaptervolume 5

Scorpion's Sting: Antislavery and the Coming of the Civil War

The President and the Freedom Fighter: Abraham Lincoln, Frederick Douglass, and Their Battle to Save America's Soul

An Environmental History of the Civil War

Battle Maps of the Civil War: The Western Theater

A Field Guide to Gettysburg, Second Edition: Experiencing the Battlefield Through Its History, Places, and People

Happy Dreams of Liberty: An American Family in Slavery and Freedom

The Underground Railroad Records: Narrating the Hardships, Hairbreadth Escapes, and Death Struggles of Slaves in Their Efforts for Freedom

Midnight Rising: John Brown and the Raid That Sparked the Civil War

The Enduring Civil War: Reflections on the Great American Crisis

The Record of Murders and Outrages: Racial Violence and the Fight Over Truth at the Dawn of Reconstruction

Battlefields of the Civil War

Trading with the Enemy: The Covert Economy During the American Civil War

Apostles of Disunion: Southern Secession Commissioners and the Causes of the Civil War

The Civil War in Maryland Reconsidered

The Families' Civil War: Black Soldiers and the Fight for Racial Justice

Stephen A. Swails: Black Freedom Fighter in the Civil War and Reconstruction

Rites of Spring: The Great War and the Birth of the Modern Age

The Thin Light of Freedom: The Civil War and Emancipation in the Heart of America

Too Useful to Sacrifice: Reconsidering George B. McClellan's Generalship in the Maryland Campaign from South Mountain to Antietam

Command and Communication Frictions in the Gettysburg Campaign

A Legacy in Brick and Stone: American Coast Defense Forts of the Third System, 1816-1867

Day by Day Through the Civil War in Georgia

Irish Brigade in the Civil War: The 69th New York and Other Irish Regiments of the Army of the Potomac

Company Aytch or a Side Show of the Big Show: A Memoir of the Civil War

We Gave Them Thunder: Marmaduke's Raid and the Civil War in Missouri and Arkansas

The False Cause: Fraud, Fabrication, and White Supremacy in Confederate Memory

Return to Bull Run: The Campaign and Battle of Second Manassas

The Campaign for Atlanta & Sherman's March to the Sea: Volume 2

A Thousand May Fall: An Immigrant Regiment's Civil War

Hidden in Plain View: A Secret Story of Quilts and the Underground Railroad