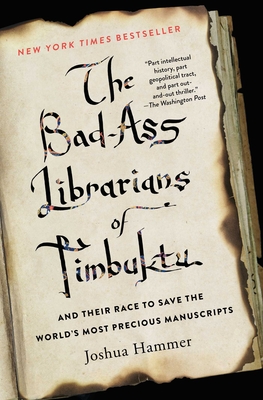 To save ancient Arabic texts from Al Qaeda, a band of librarians pulls off a brazen heist worthy of Ocean's Eleven in this fast-paced narrative that is...part intellectual history, part geopolitical tract, and part out-and-out thriller (The Washington Post) from the author of The Falcon Thief. In the 1980s, a young adventurer and collector for a government library, Abdel Kader Haidara, journeyed across the Sahara Desert and along the Niger River, tracking down and salvaging tens of thousands of ancient Islamic and secular manuscripts that were crumbling in the trunks of desert shepherds. His goal: preserve this crucial part of the world's patrimony in a gorgeous library. But then Al Qaeda showed up at the door. Part history, part scholarly adventure story, and part journalist survey...Joshua Hammer writes with verve and expertise (The New York Times Book Review) about how Haidara, a mild-mannered archivist from the legendary city of Timbuktu, became one of the world's greatest smugglers by saving the texts from sure destruction. With bravery and patience, Haidara organized a dangerous operation to sneak all 350,000 volumes out of the city to the safety of southern Mali. His heroic heist has all the elements of a classic adventure novel (The Seattle Times), and is a reminder that ordinary citizens often do the most to protect the beauty of their culture. His the story is one of a man who, through extreme circumstances, discovered his higher calling and was changed forever by it.

The Bad-Ass Librarians of Timbuktu Lib/E: And Their Race to Save the World's Most Precious Manuscripts

The Bad-Ass Librarians of Timbuktu: And Their Race to Save the World's Most Precious Manuscripts

The Ghosts of Cannae: Hannibal and the Darkest Hour of the Roman Republic

The Africa Cookbook: Tastes of a Continent

Congo Diary: Episodes of the Revolutionary War in the Congo

Strength in What Remains

The Girl Who Smiled Beads: A Story of War and What Comes After

The World's Most Dangerous Place: Inside the Outlaw State of Somalia

Africa: A Biography of the Continent

Translator: A Tribesman's Memoir of Darfur

The Inheritors: An Intimate Portrait of South Africa's Racial Reckoning

A Long Way Gone: Memoirs of a Boy Soldier

To Have Nothing: God Bless the Child Who's Got His Own

The Man-Eaters of Tsavo

The Black Joke: The True Story of One Ship's Battle Against the Slave Trade

Slaves for Peanuts: A Story of Conquest, Liberation, and a Crop That Changed History

The Tears of a Man Flow Inward: Growing Up in the Civil War in Burundi

The Red Sea Scrolls: How Ancient Papyri Reveal the Secrets of the Pyramids

We Are Heirs of the World's Revolutions: Speeches from the Burkina Faso Revolution 1983-87

Exterminate All the Brutes: One Man's Odyssey Into the Heart of Darkness and the Origins of European Genocide

All Rise: Resistance and Rebellion in South Africa

The War That Doesn't Say Its Name: The Unending Conflict in the Congo

They Poured Fire on Us from the Sky: The True Story of Three Lost Boys from Sudan

Imperial Reckoning: The Untold Story of Britain's Gulag in Kenya

The Class Struggle in Africa

The Glory of the Amhara (2nd Edition): A Pillar of Our Identity

A History of the Yoruba People

The Gifts of Africa: How a Continent and Its People Changed the World

Empire of Rubber: Firestone's Scramble for Land and Power in Liberia

The Darker Nations: A People's History of the Third World

Civilization or Barbarism: An Authentic Anthropology

West With the Night

Hope In The Sky: The Hunt for Who I Have Not Yet Become

Black Man of the Nile: And His Family

The Kebra Nagast: King Solomon, The Queen of Sheba & Her Only Son Menyelek - Ethiopian Legends and Bible Folklore

Black God: An Introduction to the World's Religions and Their Black Gods

Kaffir Boy: The True Story of a Black Youths Coming of Age in Apartheid South Africa

We Wish to Inform You That Tomorrow We Will Be Killed with Our Families: Stories from Rwanda

Carthage Must Be Destroyed: The Rise and Fall of an Ancient Civilization

Do Not Disturb: The Story of a Political Murder and an African Regime Gone Bad

Alice on the Run: One Child's Journey Through the Rwandan Civil War

Congo: The Epic History of a People

When Money Destroys Nations: How Hyperinflation Ruined Zimbabwe, How Ordinary People Survived, and Warnings for Nations that Print Money

The Golden Rhinoceros: Histories of the African Middle Ages

Reversing Sail: A History of the African Diaspora

The Fall of the Ottomans: The Great War in the Middle East

Lost on the Map: A Memoir of Colonial Illusions

For A Sign And A Wonder: Handy Scriptural References To Aid The Newly Awakened Israelite

Lost Stones of the Anunnaki: And The Mind-Altering Journey To Find Them

Flowers for Elephants: How a Conservation Movement in Kenya Offers Lessons for Us All

The Islamic State in Africa: The Emergence, Evolution, and Future of the Next Jihadist Battlefront

The Civilizations of Africa: A History to 1800

Dictatorland: The Men Who Stole Africa

Out of Egypt: A Memoir

Abina and the Important Men

Vaccines and Bayonets: Fighting Smallpox in Africa amid Tribalism, Terror and the Cold War

The Fortunes of Africa: A 5000-Year History of Wealth, Greed, and Endeavor

The Enduring Relevance of Walter Rodney's How Europe Underdeveloped Africa

The Needs of Others: Human Rights, International Organizations, and Intervention in Rwanda, 1994

The Kingdom of God in Africa: A History of African Christianity

Tutankhamun's Trumpet: Ancient Egypt in 100 Objects from the Boy-King's Tomb

A Human Being Died That Night: A South African Woman Confronts the Legacy of Apartheid

Abu Simbel and the Nubian Temples

The Willie Lynch Letter And The Making Of A Slave

Loot: Britain and the Benin Bronzes

The Book of African Proverbs: A Collection of Timeless Wisdom, Wit, Sayings & Advice

A Fistful of Shells: West Africa from the Rise of the Slave Trade to the Age of Revolution

Commander of the Faithful: The Life and Times of Emir Abd El-Kader

Cuba and Angola the War for Freedom

The Arabs: A History

In an Antique Land: History in the Guise of a Traveler's Tale

28: Stories of AIDS in Africa

The Shadow of the Sun

Inside the Hotel Rwanda: The Surprising True Story ... and Why It Matters Today

On the Nile in the Golden Age of Travel

Spear: Mandela and the Revolutionaries

Abu Simbel: A Short Guide to the Temples

No Greater Love: How My Family Survived the Genocide in Rwanda

Sacred Knowledge Traditions of the Oromo of the Horn of Africa

A Lion in the bedroom

What Britain Did to Nigeria: A Short History of Conquest and Rule

The Kebra Nagast: The Lost Bible of Rastafarian Wisdom and Faith