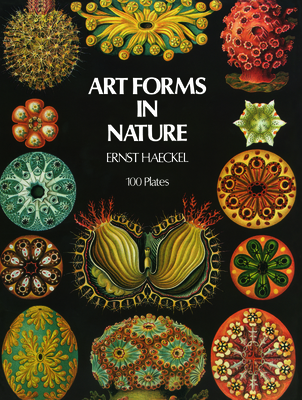 Ernst Heinrich Haeckel (1834-1919) was renowned as one of the foremost early exponents of Darwinism. His work was credited with having caused the acceptance of Darwinism in Europe, and his popular studies ― preaching the continuity of all life, organic and inorganic, from prehistoric time to the present ― converted tens of thousands of readers all over the world. Today, although no one is greatly interested in Haeckel the biologist-philosopher, his work is increasingly prized for something he himself would probably have considered secondary. These are the remarkable plates with which his work was illustrated, particularly his famous Kunstformen. The Kunstformen contains 100 beautiful lithographic plates which show a multitude of unusual life forms: Radiolaria, Foraminifera, and other forms of microscopic life; jellyfishes, starfishes, calcareous sponges, star corals, barnacles, and other sea life; mosses, lichens, red algae, ferns, fungi, orchids, and other plants; and turtles, moths, spiders, bats, frogs, lizards, hummingbirds, and antelope. With many drawings on each plate, each carefully drawn from nature, the subtle details of nature's art forms are easily compared and appreciated.
In addition to being marvelous renderings, these plates have long been noted for the peculiar emotional appeal that they have for most viewers, a premonition of surrealism with exotic organic life forms stretching back to their roots in the inorganic, and individual details drawn with awareness of subtle evolutionary changes and millennia-long developments. Artists, illustrators, and others will find them still powerful as one of the landmarks of applied art.

Art Forms in Nature: The Prints of Ernst Haeckel

Tarot of the Divine: A Deck and Guidebook Inspired by Deities, Folklore, and Fairy Tales from Around the World: Tarot Cards

Illustrated Black History: Honoring the Iconic and the Unseen

The Phantomwise Tarot: A 78-Card Deck and Guidebook (Tarot Cards)

The Botanist's Sticker Anthology: With More Than 1,000 Vintage Stickers

How to Draw Cool Stuff: A Drawing Guide for Teachers and Students

One Thousand Years of Manga

Everything, Beautiful: A Guide to Finding Hidden Beauty in the World

The Art of Posuka Demizu

Daydream: The Art of Ukumo Uiti

You Are Your Best Friend

Yesterday I Was the Moon

An Answer for Everything: 200 Infographics to Explain the World

A Kind of Magic: The Kaleidoscopic World of Luke Edward Hall

Kay Nielsen. East of the Sun and West of the Moon

All the Buildings in Los Angeles: That I've Drawn So Far

Art of Coloring: Poster Art of the Disney Parks: 36 Postcards to Inspire Creativity

Picture This: How Pictures Workrevised and Expanded 25th Anniversary Edition

Drawing Dimensions: A Shading Guide for Teachers and Students

Christian Dior: The Illustrated World of a Fashion Master

Graphic Design for Everyone: Understand the Building Blocks So You Can Do It Yourself

Words to Live by: (Inspirational Quote Book for Women, Motivational and Empowering Gift for Girls and Women)

Petal: A World of Flowers Through the Artist's Eye

Wonderland: The Art of Nanaco Yashiro

The World of Mucha: A Journey to Two Fairylands: Paris and Czech

The Little Book of Life Hacks: How to Make Your Life Happier, Healthier, and More Beautiful

Art of Coloring: Maps of the Disney Parks: 36 Postcards to Inspire Creativity

Heavy Metal Presents, the Tolkien Art of the Brothers Hildebrandt 2023

The Doré Gallery: His 120 Greatest Illustrations

Color: A Course in Mastering the Art of Mixing Colors

Embroidery: The Art of Yoshioka

The Art of Yoko Tanji

Slowboy: Portraits of the Modern Gentleman

Herve Tullet's Art of Play: Images and Inspirations from a Life of Radical Creativity

Jewellery Illustration and Design, Vol.2: From the Idea to the Project

20 Ways to Draw a Tulip and 44 Other Fabulous Flowers: A Sketchbook for Artists, Designers, and Doodlers

The Arina Tanemura Collection: The Art of Full Moon

Science Illustration. a History of Visual Knowledge from the 15th Century to Today

Momentary: The Art of Ilya Kuvshinov

The Disney Book: A Celebration of the World of Disney

The Art of the Illustrated Book: History and Design

Draw Your Own Comic Book!

Pareidolia: A Retrospective of Beloved and New Works by James Jean

Let's Be Weird Together: A Book about Love

The Art of Robert E. McGinnis

Flexible: The Art of Yo Shimizu

Draplin Design Co.: Pretty Much Everything

The Art of Grasshopper Manufacture: Complete Collection of Suda51 - A Great Video Game Designer in Japan

You Are Here 2: A New Approach to Signage and Wayfinding