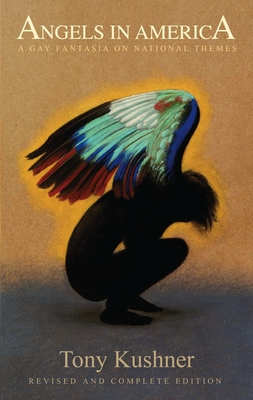 Winner of the Pulitzer Prize for Drama
Angels in America: A Gay Fantasia on National Themes includes Part One, Millennium Approaches and Part Two, Perestroika Glorious. A monumental, subversive, altogether remarkable masterwork...Details of specific catastrophes may have changed since this Reagan-era AIDS epic won the Pulitzer and the Tony, but the real cosmic and human obsessions--power, religion, sex, responsibility, the future of the world--are as perilous, yet as falling-down funny, as ever. -Linda Winer, Newsday A vast, miraculous play... provocative, witty and deeply upsetting... a searching and radical rethinking of American political drama. - Frank Rich, New York Times A victory for theater, for the transforming power of the imagination to turn devastation into beauty. - John Lahr, New Yorker An enormously impressive work of the imagination and intellect, a towering example of what theater stretched to its full potential can achieve. -Philadelphia Inquirer Angels in America is the finest drama of our time, speaking to us of an entire era of life and death as no other play within memory. It ranks as nothing less than one of the greatest plays of the twentieth century. - John Heilpern, New York Observer Some playwrights want to change the world. Some want to revolutionize theater. Tony Kushner is that rarity of rarities: a writer who has the promise to do both. -New York Times This new edition of Tony Kushner's masterpiece is published with the author's recent changes and a new introduction in celebration of the twentieth anniversary of its original production. One of the most honored American plays in history, Angels in America was awarded two Tony Awards for Best Play and the Pulitzer Prize for Drama. It was made into an Emmy Award-winning HBO film directed by Mike Nichols. This two-part epic, subtitled A Gay Fantasia on National Themes, has received hundreds of performances worldwide in more than twenty-six languages. Tony Kushner's plays include Angels in America; Hydriotaphia, or the Death of Dr. Brown; The Illusion, adapted from the play by Pierre Cornelle; Slavs!; A Bright Room Called Day; Homebody/Kabul; Caroline, or Change, a musical with composer Jeanine Tesori; and The Intelligent Homosexual's Guide to Capitalism and Socialism with a Key to the Scriptures. He wrote the screenplays for Mike Nichols's film of Angels in America and for Steven Spielberg's Munich and Lincoln. His books include The Art of Maurice Sendak: 1980 to the Present; Brundibar, with illustrations by Maurice Sendak; and Wrestling with Zion: Progressive Jewish-American Responses to the Israeli-Palestinian Conflict, co-edited with Alisa Solomon.
Among many honors, Kushner is the recipient of a Pulitzer Prize, two Tony Awards, three Obie Awards, two Evening Standard Awards, an Olivier Award, an Emmy Award, two Oscar nominations, and the Steinberg Distinguished Playwright Award. He is a member of the American Academy of Arts and Letters. In 2012, he was awarded a National Medal of Arts by President Barack Obama. He lives in Manhattan with his husband, Mark Harris.

This Is Modern Art: A Play

The Men in White

The Importance of Being Earnest (Legend Classics)

He Brought Her Heart Back in a Box and Other Plays

Faust, Part One: A New Translation with Illustrations

The Importance of Being Earnest and Other Plays (Vintage Classics)

The Importance of Being Earnest: And Other Plays

Who's Afraid of Virginia Woolf?: A Play

Boy Gets Girl: A Play

Ten Acrobats In An Amazing Leap Of Faith

Antigone: In a New Translation by Nicholas Rudall