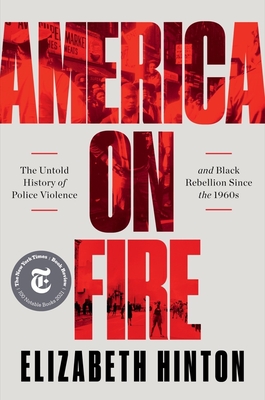 What began in spring 2020 as local protests in response to the killing of George Floyd by Minneapolis police quickly exploded into a massive nationwide movement. Millions of mostly young people defiantly flooded into the nation's streets, demanding an end to police brutality and to the broader, systemic repression of Black people and other people of color. To many observers, the protests appeared to be without precedent in their scale and persistence. Yet, as the acclaimed historian Elizabeth Hinton demonstrates in America on Fire, the events of 2020 had clear precursors--and any attempt to understand our current crisis requires a reckoning with the recent past.

Even in the aftermath of Donald Trump, many Americans consider the decades since the civil rights movement in the mid-1960s as a story of progress toward greater inclusiveness and equality. Hinton's sweeping narrative uncovers an altogether different history, taking us on a troubling journey from Detroit in 1967 and Miami in 1980 to Los Angeles in 1992 and beyond to chart the persistence of structural racism and one of its primary consequences, the so-called urban riot. Hinton offers a critical corrective: the word riot was nothing less than a racist trope applied to events that can only be properly understood as rebellions--explosions of collective resistance to an unequal and violent order. As she suggests, if rebellion and the conditions that precipitated it never disappeared, the optimistic story of a post-Jim Crow United States no longer holds.

The central lesson from these eruptions--that police violence invariably leads to community violence--continues to escape policymakers, who respond by further criminalizing entire groups instead of addressing underlying socioeconomic causes. The results are the hugely expanded policing and prison regimes that shape the lives of so many Americans today. Presenting a new framework for understanding our nation's enduring strife, America on Fire is also a warning: rebellions will surely continue unless police are no longer called on to manage the consequences of dismal conditions beyond their control, and until an oppressive system is finally remade on the principles of justice and equality.

How the Word Is Passed: A Reckoning with the History of Slavery Across America

Working The Roots: Over 400 Years of Traditional African American Healing

An African American and Latinx History of the United States

The Hoodoo Tarot: 78-Card Deck and Book for Rootworkers

Chasing Me to My Grave: An Artist's Memoir of the Jim Crow South

Say Their Names: How Black Lives Came to Matter in America

Black on Both Sides: A Racial History of Trans Identity

Chocolate City: A History of Race and Democracy in the Nation's Capital

The Nation Must Awake: My Witness to the Tulsa Race Massacre of 1921

The Color of Money: Black Banks and the Racial Wealth Gap

Our Team: The Epic Story of Four Men and the World Series That Changed Baseball

Debunking the 1619 Project: Exposing the Plan to Divide America

Presumed Guilty: How the Supreme Court Empowered the Police and Subverted Civil Rights

How We Can Win: Race, History and Changing the Money Game That's Rigged

Stony the Road: Reconstruction, White Supremacy, and the Rise of Jim Crow

Ida B. the Queen: The Extraordinary Life and Legacy of Ida B. Wells

From Here to Equality: Reparations for Black Americans in the Twenty-First Century

A Better Life for Their Children: Julius Rosenwald, Booker T. Washington, and the 4,978 Schools That Changed America

Shade: A Tale of Two Presidents

The Joy of the Disinherited: Essays on Trauma, Oppression, and Black Mental Health

From Burning to Blueprint: Rebuilding Black Wall Street After a Century of Silence

No Common Ground: Confederate Monuments and the Ongoing Fight for Racial Justice

Black Fortunes: The Story of the First Six African Americans Who Survived Slavery and Became Millionaires

Up From Slavery: An Autobiography

Traveling Black: A Story of Race and Resistance

The Mis-Education of the Negro

Emmett Till: The Murder That Shocked the World and Propelled the Civil Rights Movement

Until Justice Be Done: America's First Civil Rights Movement, from the Revolution to Reconstruction

Power Hungry: Women of the Black Panther Party and Freedom Summer and Their Fight to Feed a Movement

Footnotes: The Black Artists Who Rewrote the Rules of the Great White Way

Black Against Empire: The History and Politics of the Black Panther Party

The Sword and the Shield: The Revolutionary Lives of Malcolm X and Martin Luther King Jr.

I've Been Here All the While: Black Freedom on Native Land

Vanguard: How Black Women Broke Barriers, Won the Vote, and Insisted on Equality for All

The Sword and the Shield: The Revolutionary Lives of Malcolm X and Martin Luther King Jr.

Force and Freedom: Black Abolitionists and the Politics of Violence

How the Word Is Passed: A Reckoning with the History of Slavery Across America (Large Print Edition)

Dance Theatre of Harlem: A History, a Movement, a Celebration

Vanguard: How Black Women Broke Barriers, Won the Vote, and Insisted on Equality for All

The Mis-Education of the Negro

Looking for Lorraine: The Radiant and Radical Life of Lorraine Hansberry

Black Built: History and Architecture in the Black Community

Gordon Parks: The Atmosphere of Crime, 1957

Roots: The Saga of an American Family

Southern Exposure: The Overlooked Architecture of Chicago's South Side

Three African American Classics: Narrative of the Life of Frederick Douglass, Up from Slavery: An Autobiography, The Souls of Black Folk

Death in a Promised Land: The Tulsa Race Riot of 1921

Light for the World to See: A Thousand Words on Race and Hope

The Compton Cowboys: The New Generation of Cowboys in America's Urban Heartland

A Shot in the Moonlight: How a Freed Slave and a Confederate Soldier Fought for Justice in the Jim Crow South

She Came to Slay: The Life and Times of Harriet Tubman

No More Lies: The Myth and Reality of American History

Be Free or Die: The Amazing Story of Robert Smalls' Escape from Slavery to Union Hero

Wandering in Strange Lands: A Daughter of the Great Migration Reclaims Her Roots

1001 Things Everyone Should Know about African American History

Tales from the Haunted South: Dark Tourism and Memories of Slavery from the Civil War Era

The Rope: A True Story of Murder, Heroism, and the Dawn of the NAACP

The Fire Is Upon Us: James Baldwin, William F. Buckley Jr., and the Debate Over Race in America

Buses Are a Comin': Memoir of a Freedom Rider

Defining Moments in Black History: Reading Between the Lies

The Child in the Electric Chair: The Execution of George Junius Stinney Jr. and the Making of a Tragedy in the American South

Black Cowboys in the American West: On the Range, on the Stage, behind the Badge

The Philadelphia Negro: A Social Study and History of Pennsylvania's Black American Population; their Education, Environment and Work

Bronzeville Nights: On the Town in Chicago's Black Metropolis

The Slave Ship: A Human History

Scorpion's Sting: Antislavery and the Coming of the Civil War

W.E.B. Du Bois: Black Reconstruction (Loa #350): An Essay Toward a History of the Part Whichblack Folk Played in the Attempt to Reconstructdemocracy i

To Drink from the Well: The Struggle for Racial Equality at the Nation's Oldest Public University

Running from Bondage: Enslaved Women and Their Remarkable Fight for Freedom in Revolutionary America

Sign My Name to Freedom: A Memoir of a Pioneering Life

The Portland Black Panthers: Empowering Albina and Remaking a City

What to the Slave Is the Fourth of July?

Dapper Dan: Made in Harlem: A Memoir

The Movement: The African American Struggle for Civil Rights

Slavery and Abolition in Pennsylvania

To Poison a Nation: The Murder of Robert Charles and the Rise of Jim Crow Policing in America

A Time of Terror: A Survivor's Story

Nine Days: The Race to Save Martin Luther King Jr.'s Life and Win the 1960 Election

River of Blood: American Slavery from the People Who Lived It: Interviews & Photographs of Formerly Enslaved African Americans

The World According to Fannie Davis: My Mother's Life in the Detroit Numbers

Nine Days: The Race to Save Martin Luther King Jr.'s Life and Win the 1960 Election

The Cause of Freedom: A Concise History of African Americans

Driving While Black: African American Travel and the Road to Civil Rights

The Price for Their Pound of Flesh: The Value of the Enslaved, from Womb to Grave, in the Building of a Nation

Olympic Pride, American Prejudice: The Untold Story of 18 African Americans Who Defied Jim Crow and Adolf Hitler to Compete in the 1936 Berlin Olympic

Blood in Their Eyes: The Elaine Massacre of 1919

Systemic Racism 101: A Visual History of the Impact of Racism in America