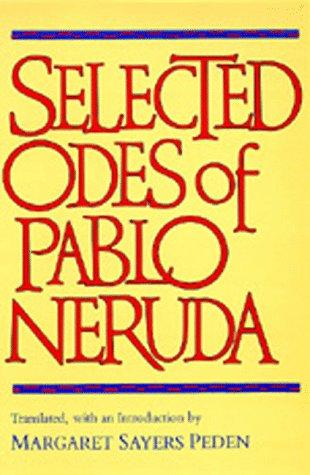 The atom, a tuna, laziness, love--the everyday elements and essences of human experience glow in the translucent language of Neruda's odes. Chilean poet Pablo Neruda (1904-1973) wrote three books of odes during his lifetime. Odas elementales was published in 1954, followed in subsequent years by Nuevas odas elementales and Tercer libro de las odas. Margaret Sayers Peden's selection of odes from all three volumes, printed with the Spanish originals on facing pages, is by far the most extensive yet to appear in English. She vividly conveys the poet's vision of the realities of day-to-day life in her translations, while her brief introduction describes the genesis of the poems. To write simply of simple things was a task the poet undertook consciously, following his experiences in the Spanish Civil War, the social conversion that resulted from a visit to Macchu Picchu, and the writing of his epic Canto general (California, forthcoming). The odes are arranged in brief, sinuous lines that flow down the page and connect the poet to the animal, mineral, and vegetable world, to people and objects, and to the landscape of history. Chile, Neruda once said in reference to the work of sixteenth-century poet Alonso de Ercilla, was invented by a poet. In accepting the Nobel Prize for Literature in 1971, he declared that We [writers from the vast expanse of America] are called upon to fill with words the confines of a mute continent, and we become drunk with the task of telling and naming. The odes reflect what Neruda saw as both an obligation and a privilege--the naming and defining of his world.

A Treasury of Iqbal

Advice from 1 Disciple of Marx to 1 Heidegger Fanatic

The Palm at the End of the Mind: Selected Poems and a Play

Music for Landing Planes by: Poems

If Men, Then: Poems

The Poems and Prose of Mary, Lady Chudleigh

The Shadow of Sirius

The Magnitude of My Sublime Existence

The Sacramento of Desire

I Wish I Had a Heart Like Yours, Walt Whitman

A Pound of Steam

What Burden Do Those Trains Bear Away: A Memoir in Poems

The Simple Feeling of Being: Visionary, Spiritual, and Poetic Writings

The Wind Blows, the Ice Breaks: Poems of Loss and Renewal by Minnesota Poets

Blood of the Sun: Poems

Green Is for World

Earth in Anger: Twenty-Five Poems of Love and Despair for Planet Earth

The Gathering of My Name

how to be mentally well: a guide on self-love and healing by isabella dorta

The World Keeps Ending, and the World Goes on

Christian Poetry in America Since 1940: An Anthology

Alive at the End of the World

From One Mom to a Mother: Poetry & Momisms

how to be heartbroken: a guide on love and heartbreak by isabella dorta

Lend a Hand: Poems about Giving

From One Mom to a Mother: Poetry & Momisms

I Have to Tell You Something

Girl Made of Glass

A Sinking Ship is Still a Ship