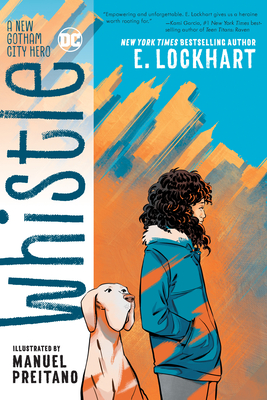 From New York Times bestselling author E. Lockhart (Genuine Fraud, We Were Liars) and artist Manuel Preitano (The Oracle Code) comes a new Gotham City superhero in this exciting YA graphic novel. Sixteen-year-old Willow Zimmerman has something to say. When she's not on the streets protesting City Hall's neglect of her run-down Gotham neighborhood, she's working nights at the local dog shelter. But despite how much she does for the world around her, she's struggling to take care of her sick mother at home. She's got no time for boys (though there's one she really likes), and no means to adopt the amazingly loyal stray Great Dane, Lebowitz, that follows her around.

Without health insurance and with money running out, a desperate Willow reconnects with an estranged family friend E. Nigma--party promoter, and real estate tycoon. Nigma opens the door to an easier life, offering Willow a new job hosting his glamorous private poker nights with Gotham City's elites. Now Willow is able to afford critical medical treatments for her mother and get a taste of the high life she's never had.

Then everything changes: Willow and Lebowitz are attacked by one of Gotham's most horrific villains, the monstrous Killer Croc. When they wake after the fight, they can understand each other. And Willow has powers she never dreamed of.

When Willow discovers that Nigma and his poker buddies are actually some of Gotham's most corrupt criminals, she must make a choice: remain loyal to the man who saved her mother's life, or use her new powers to save her community.

Demon in the Wood Graphic Novel

I Want to Eat Your Pancreas: The Complete Manga Collection

Messy Roots: A Graphic Memoir of a Wuhanese American

I Am Alfonso Jones

Go for It, Nakamura!!

Doughnuts Under a Crescent Moon Vol. 1

Taproot: A Story about a Gardener and a Ghost

A Quick & Easy Guide to Asexuality

Tower of God Volume One

Tower of God Volume One

I'm in Love with the Villainess (Light Novel) Vol. 1

Numb to This: Memoir of a Mass Shooting

The Song of Yoru & Asa

Zatanna: The Jewel of Gravesend

I'm in Love with the Villainess (Light Novel) Vol. 2

Wait, What?: A Comic Book Guide to Relationships, Bodies, and Growing Up

The Girl from the Other Side: Siúil, a Rún Vol. 10

Stranger Things: The Other Side (Graphic Novel)

Cheer Up: Love and Pompoms

Messy Roots: A Graphic Memoir of a Wuhanese American

In the Shadow of the Throne

Numb to This: Memoir of a Mass Shooting

From the Roots Up

A Quick & Easy Guide to Consent

Alone in Space: A Collection

M Is for Monster

In the Shadow of the Fallen Towers: The Seconds, Minutes, Hours, Days, Weeks, Months, and Years After the 9/11 Attacks

Wynd Book One: Flight of the Prince

Maybe an Artist, a Graphic Memoir

Notes from a Sickbed

Wynd Book Two: The Secret of the Wings

The Dark Matter of Mona Starr

The Girl from the Other Side: Siúil, a Rún Vol. 5

Piece by Piece: The Story of Nisrin's Hijab

The Girl from the Other Side: Siúil, a Rún Vol. 7

Dancing at the Pity Party

Across a Field of Starlight: (A Graphic Novel)

A Spark Within the Forge: An Ember in the Ashes Graphic Novel

The Girl from the Other Side: Siúil, a Rún Vol. 8

Ascendance of a Bookworm: Part 1 Volume 1

The Girl from the Other Side: Siúil, a Rún Vol. 11

Let's Talk about It: The Teen's Guide to Sex, Relationships, and Being a Human (a Graphic Novel)

Doughnuts Under a Crescent Moon Vol. 2