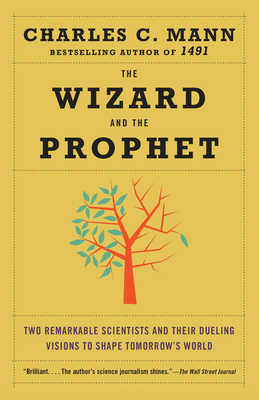 The Wizard and the Prophet: Two Remarkable Scientists and Their Dueling Visions to Shape Tomorrow's World

From the best-selling, award-winning author of 1491 and 1493--an incisive portrait of the two little-known twentieth-century scientists, Norman Borlaug and William Vogt, whose diametrically opposed views shaped our ideas about the environment, laying the groundwork for how people in the twenty-first century will choose to live in tomorrow's world. In forty years, Earth's population will reach ten billion. Can our world support that? What kind of world will it be? Those answering these questions generally fall into two deeply divided groups--Wizards and Prophets, as Charles Mann calls them in this balanced, authoritative, nonpolemical new book. The Prophets, he explains, follow William Vogt, a founding environmentalist who believed that in using more than our planet has to give, our prosperity will lead us to ruin. Cut back! was his mantra. Otherwise everyone will lose! The Wizards are the heirs of Norman Borlaug, whose research, in effect, wrangled the world in service to our species to produce modern high-yield crops that then saved millions from starvation. Innovate! was Borlaug's cry. Only in that way can everyone win! Mann delves into these diverging viewpoints to assess the four great challenges humanity faces--food, water, energy, climate change--grounding each in historical context and weighing the options for the future. With our civilization on the line, the author's insightful analysis is an essential addition to the urgent conversation about how our children will fare on an increasingly crowded Earth.

The Nature of Oaks: The Rich Ecology of Our Most Essential Native Trees

Nature's Best Hope: A New Approach to Conservation That Starts in Your Yard

All That the Rain Promises and More: A Hip Pocket Guide to Western Mushrooms

The Weaponization of Weather in the Phony Climate War

How to Avoid a Climate Disaster: The Solutions We Have and the Breakthroughs We Need

Edible and Medicinal Plants of the Rockies

Under a White Sky: The Nature of the Future

The Secret Wisdom of Nature: Trees, Animals, and the Extraordinary Balance of All Living Things --- Stories from Science and Observation

100 Plants to Feed the Monarch: Create a Healthy Habitat to Sustain North America's Most Beloved Butterfly

A World on the Wing: The Global Odyssey of Migratory Birds

Inconvenient Facts: The Science That Al Gore Doesn't Want You to Know

The Secret World of Weather: How to Read Signs in Every Cloud, Breeze, Hill, Street, Plant, Animal, and Dewdrop

Tree Finder: A Manual for Identification of Trees by Their Leaves (Eastern Us)

The Arbornaut: A Life Discovering the Eighth Continent in the Trees Above Us

Michigan Trees: A Guide to the Trees of the Great Lakes Region

The Language of Cottonwoods: Essays on the Future of North Dakota

The Redemption of Wolf 302: From Renegade to Yellowstone Alpha Male

Owls of the Eastern Ice: A Quest to Find and Save the World's Largest Owl

The Death and Life of the Great Lakes

Bringing Nature Home: How You Can Sustain Wildlife with Native Plants

American Buffalo: In Search of a Lost Icon

Homewaters: A Human and Natural History of Puget Sound

As Long as Grass Grows: The Indigenous Fight for Environmental Justice, from Colonization to Standing Rock

Brilliant Green: The Surprising History and Science of Plant Intelligence

Drawdown: The Most Comprehensive Plan Ever Proposed to Reverse Global Warming

The Brilliant Abyss: Exploring the Majestic Hidden Life of the Deep Ocean, and the Looming Threat That Imperils It

Isaac's Storm: A Man, a Time, and the Deadliest Hurricane in History

Diary of a Young Naturalist

Climate, all is well, all will be well

The Bedside Book of Birds: An Avian Miscellany

The New Climate War: The Fight to Take Back Our Planet

The Hummingbird Handbook: Everything You Need to Know about These Fascinating Birds

How to Prepare for Climate Change: A Practical Guide to Surviving the Chaos

Beloved Beasts: Fighting for Life in an Age of Extinction

The Glitter in the Green: In Search of Hummingbirds

Can I Recycle This?: A Guide to Better Recycling and How to Reduce Single-Use Plastics

The Worst Hard Time: The Untold Story of Those Who Survived the Great American Dust Bowl

Clean & Green: 101 Hints and Tips for a More Eco-Friendly Home

Sand Talk: How Indigenous Thinking Can Save the World

A Landowner's Guide to Managing Your Woods: How to Maintain a Small Acreage for Long-Term Health, Biodiversity, and High-Quality Timber Production

Bicycling with Butterflies: My 10,201-Mile Journey Following the Monarch Migration

The Botany of Desire: A Plant's-Eye View of the World

How to Be More Tree: Essential Life Lessons for Perennial Happiness

Bright Green Lies: How the Environmental Movement Lost Its Way and What We Can Do about It

The Big Burn: Teddy Roosevelt and the Fire That Saved America

Miseducation: How Climate Change Is Taught in America

Church of the Wild: How Nature Invites Us into the Sacred

Move: The Forces Uprooting Us

On Fire: The (Burning) Case for a Green New Deal

The Story of More: How We Got to Climate Change and Where to Go from Here

What the Eyes Don't See: A Story of Crisis, Resistance, and Hope in an American City

Wild Souls: Freedom and Flourishing in the Non-Human World

How the Mountains Grew: A New Geological History of North America

Earthshot: How to Save Our Planet

Guardians of the Trees: A Journey of Hope Through Healing the Planet: A Memoir

The Star Builders: Nuclear Fusion and the Race to Power the Planet

The Atlas of Disappearing Places: Our Coasts and Oceans in the Climate Crisis

In Search of Mycotopia: Citizen Science, Fungi Fanatics, and the Untapped Potential of Mushrooms

Wildflowers of the Pacific Northwest

Count Down: How Our Modern World Is Threatening Sperm Counts, Altering Male and Female Reproductive Development, and Imperiling th

The Sibley Guide to Trees

Garden Revolution: How Our Landscapes Can Be a Source of Environmental Change

Florida's Living Beaches: A Guide for the Curious Beachcomber

The Laws Field Guide to the Sierra Nevada

How to Avoid a Climate Disaster: The Solutions We Have and the Breakthroughs We Need

Fire in Paradise: An American Tragedy

Tending the Wild: Native American Knowledge and the Management of California's Natural Resources

The Gulf: The Making of an American Sea

A Sand County Almanac and Sketches Here and There

Blue Mind: The Surprising Science That Shows How Being Near, In, On, or Under Water Can Make You Happier, Healthier, More Connect

Seeing Silence: The Beauty of the World's Most Quiet Places

Cascadia Revealed: A Guide to the Plants, Animals, and Geology of the Pacific Northwest Mountains

American Wolf: A True Story of Survival and Obsession in the West

Two Worlds: Above and Below the Sea

Born to Rewild: Triumphs of a Now Fearless Woman

Foraging with Kids: 52 Wild and Free Edibles to Enjoy with Your Children

Waves and Beaches: The Powerful Dynamics of Sea and Coast

The Bears Ears: A Human History of America's Most Endangered Wilderness

The Dreamt Land: Chasing Water and Dust Across California

The Most Important Comic Book on Earth: Stories to Save the World

In Defense of Plants: An Exploration Into the Wonder of Plants (Plant Guide, Horticulture)

Owls of the Eastern Ice: A Quest to Find and Save the World's Largest Owl

This Is Climate Change: A Visual Guide to the Facts--See for Yourself How the Planet Is Warming and What It Means for Us

Our National Forests: Stories from America's Most Important Public Lands

The New Beachcomber's Guide to the Pacific Northwest

Into the Planet: My Life as a Cave Diver

The Weather of the Pacific Northwest

Back to Earth: What Life in Space Taught Me about Our Home Planet--And Our Mission to Protect It

The Golden Spruce: A True Story of Myth, Madness, and Greed

What the Robin Knows: How Birds Reveal the Secrets of the Natural World

They Called Us River Rats: The Last Batture Settlement of New Orleans

The Restless Northwest: A Geological Story

A Field Guide to Climate Anxiety: How to Keep Your Cool on a Warming Planet

The Loneliest Polar Bear: A True Story of Survival and Peril on the Edge of a Warming World

Viva Texas Rivers!: Adventures, Misadventures, and Glimpses of Nirvana Along Our Storied Waterways

The Language of Butterflies: How Thieves, Hoarders, Scientists, and Other Obsessives Unlocked the Secrets of the World's Favorite Insect

Creative Haven by the Sea Color by Number

Grand Transitions: How the Modern World Was Made

Ranger Confidential: Living, Working, and Dying in the National Parks

Imagine It!: A Handbook for a Happier Planet

The Healthy Vegetable Garden: A Natural, Chemical-Free Approach to Soil, Biodiversity and Managing Pests and Diseases