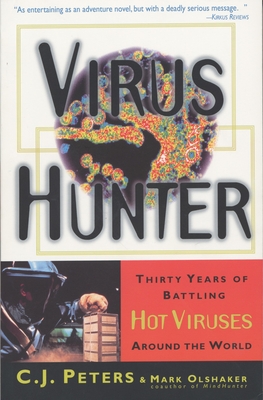 A New York Times Notable Book The man who led the battle against Ebola in The Hot Zone teams up with the bestselling co-author of Mind Hunter to chronicle his extraordinary thirty-year career fighting deadly viruses. For three decades, Dr. C. J. Peters was on the front lines of our biological battle against hot viruses around the world. In the course of that career, he learned countless lessons about our interspecies turf wars with infectious agents. Called in to contain an outbreak of deadly hemorrhagic fever in Bolivia, he confronted the despair of trying to save a colleague who accidentally infected himself with an errant scalpel. Working in Level 4 labs on the Machupo and Ebola viruses, he saw time and again why expensive high-tech biohazard containment equipment is only as safe as the people who use it. Because of new, emerging viruses, and the return of old, vanquished ones for which vaccines do not exist, there remains a very real danger of a new epidemic that could, without proper surveillance and early intervention, spread worldwide virtually overnight. And the possibility of foreign countries or terrorist groups using deadly airborne viruses--the poor man's nuclear arsenal--looms larger than ever. High-octane science writing at its best and most revealing, Virus Hunter is a thrilling first-person account of what it is like to be a warrior in the Hot Zone.