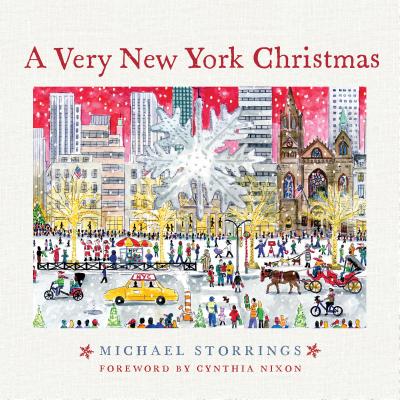 In A Very New York Christmas, award-winning designer and illustrator Michael Storrings captures the spirit of the holidays in New York in dozens of watercolors, which since 2003 have been turned into bestselling Christmas ornaments.

The unique sights, sounds, and experiences of New York City at Christmastime have enthralled residents and visitors alike for decades, inspiring tributes to the city in words and images. From the Macy's Thanksgiving Day Parade, to the lighting of the Christmas tree at Rockefeller Center, to the New Year's Eve celebration in Times Square, New York offers a magical landscape that epitomizes the excitement of the holiday season in one of the world's greatest cities. A Very New York Christmas crisscrosses Manhattan and the four outer boroughs to bring us a Christmas for all New Yorkers--whether residents or just fans--including less well-known traditions, like the Boys Choir of Harlem, the Christmas lights in Brooklyn's Dyker Heights, and the Holiday Train show at The New York Botanical Garden in the Bronx. With a delightful foreword from Cynthia Nixon (Miranda from Sex and the City), this jewel-like book combines festive quotations from literature and popular culture with Storrings's charming watercolors of forty cherished New York holiday scenes, making this a perfect gift and yuletide keepsake. This edition includes a four-page full-color insert of removable ornaments.

The Complete Work of Raphael

Vermeer and Painting in Delft

Degas and America : The Early Collectors

Titian and the Golden Age of Venetian Painting: Masterpieces from the National Galleries of Scotland

Jojo 6251: The World of Hirohiko Araki

Things to Look Forward to: 52 Large and Small Joys for Today and Every Day

The Tarot of Leonora Carrington

The Red Book: A Reader's Edition

A History of the World (in Dingbats): Drawings & Words

Fresh Naked Girls - English Edition: In and Out of Lingerie

Out of the Forests: The Art of Paul Bonner

Louise Bourgeois X Jenny Holzer: The Violence of Handwriting Across a Page

The World of Frida Kahlo 1000 Piece Puzzle: A Jigsaw Puzzle

Tom of Finland: An Imaginary Sketchbook

Houseplants and Hot Sauce: A Seek-And-Find Book for Grown-Ups (Seek and Find Books for Adults, Seek and Find Adult Games)

Get Your Sh*t Together

David Hockney: The Arrival of Spring in Normandy, 2020

Love and Justice: A Journey of Empowerment, Activism, and Embracing Black Beauty

Life Force: A Painter's Response to the Nature Poetry of Ted Hughes

Color Your Own Monet Paintings

You Are Your Best Friend