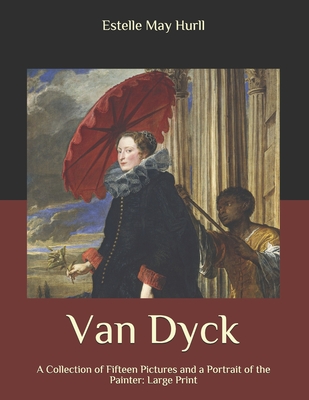 Van Dyck: A Collection of Fifteen Pictures and a Portrait of the Painter: Large Print

The city of Antwerp was at one time famous for its commercial and industrial interests, and it was besides an important centre of art. Here in the seventeenth century lived the two foremost Flemish painters, Peter Paul Rubens, and Anthony Van Dyck. The Flemish industries had chiefly to do with the making of beautiful things. Among them were tapestries in rich designs and many colors, used for wall hangings. The Flemish weavers were also skilled in making fabrics of silk and velvet. Most famous of all were their laces, patiently wrought by hand, on pillows, and unrivalled throughout the world for delicacy of workmanship. Glass and porcelain were also among their industrial products. In Antwerp, too, was the printing establishment of Plantin, from which issued many learned works in French and Latin.Among refined people like these, who not only loved beautiful things but could afford to buy them, the art of painting was highly esteemed. There was every encouragement for a young artist to pursue this calling. Rubens was already a great painter when Van Dyck began his art studies, and the older man gave the younger much helpful advice. At his friend's suggestion Van Dyck travelled several years in Italy, where he was inspired by the works of the Italian masters of the preceding century. Returning at length to his native city, he set up a studio of his own, and soon became a favorite portrait painter among the rich and fashionable classes. Not a few of his sitters were foreign sojourners in the Netherlands, especially the English. The lady of our illustration is quite plainly of this nationality, though she is dressed according to the Flemish modes.It appears that an English merchant named Wake was established in Antwerp at this time, and it is supposed that this may be his daughter. There are also reasons for connecting the portrait with one of a certain English baronet named Sheffield, who was likewise in Belgium in this period. Miss Anna Wake, we may conclude, had married into the Sheffield family when this portrait was painted. These names, however, are mere guesses, and, even if they were verified, would tell us no more of the lady's story than we can gather from the picture. Her life was probably not of the eventful kind which passes into history. The luxuries of her surroundings we may judge from her rich dress and jewels; the sweetness of her character is written in her face.She shows us perhaps more of her inner life than she intends. Her fine reserve would naturally shrink from any sort of familiarity. Yet as she stands quietly before the portrait painter, left, as it were, to the solitude of her own thoughts, her spirit seems to look out of the candid eyes.

Van Dyck: A Collection of Fifteen Pictures and a Portrait of the Painter

Van Dyck: A Collection of Fifteen Pictures, and a Portrait of the Painter

Van Dyck: A Collection of Fifteen Pictures, and a Portrait of the Painter

A Book That Takes Its Time: An Unhurried Adventure in Creative Mindfulness

What It's Like to Be a Bird: From Flying to Nesting, Eating to Singing--What Birds Are Doing, and Why

Drawing Nature for the Absolute Beginner

Maps of the Disney Parks: Charting 60 Years from California to Shanghai

Bob Ross by the Numbers

The Complete Art of Fullmetal Alchemist

S. Petersen's Field Guide to Lovecraftian Horrors: A Field Observer's Handbook of Preternatural Entities and Beings from Beyond the Wall of Sleep

Draw Your World: How to Sketch and Paint Your Remarkable Life

Around the World in 80 Plants

The Art of Naruto: Uzumaki

Astrology. the Library of Esoterica

Tarot. the Library of Esoterica

Castlevania: The Art of the Animated Series

The Disney Monorail: Imagineering a Highway in the Sky

How to Draw Fantasy Art and RPG Maps: Step by Step Cartography for Gamers and Fans

How to Draw Animals: In Simple Steps

Keeping a Nature Journal, 3rd Edition: Deepen Your Connection with the Natural World All Around You

Final Fantasy XIV: Heavensward -- The Art of Ishgard -The Scars of War-

Naming the Animals: An Invitation to Creativity

The Future of the Museum: 28 Dialogues

Fantasy Mapmaker: How to Draw RPG Cities for Gamers and Fans

The Listening Path: The Creative Art of Attention (a 6-Week Artist's Way Program)

Watts On Bridgman: Torso Front and Back

Art Page-A-Day Gallery Calendar 2022: A Year of Masterpieces on Your Desk.

Drawn to Nature: Gilbert White and the Artists

The Art of Cruelty: A Reckoning

Around the World in 80 Trees

The Rime of the Ancient Mariner

Sketching from the Imagination: Characters

Spiroglyphics: CN 40 greatest cartoon characters of all time - Spiroglyphics coloring book - New Kind of Coloring with One Color to U

Writing the Future: Basquiat and the Hip-Hop Generation

The Compendium of Forgotten Secrets: Awakening

Sketch with Asia: Manga-Inspired Art and Tutorials by Asia Ladowska

For the Love of Frida 2022 Wall Calendar: Art and Words Inspired by Frida Kahlo

How to Render: The Fundamentals of Light, Shadow and Reflectivity

Living in Data: A Citizen's Guide to a Better Information Future

Figure Drawing: For All It's Worth

At the Mountains of Madness Vol 1

You Will Leave a Trail of Stars: Words of Inspiration for Blazing Your Own Path

Around the World in 80 Trees: (The Perfect Gift for Tree Lovers)

A Middle-Earth Traveler: Sketches from Bag End to Mordor

Drawing for the Absolute Beginner: A Clear & Easy Guide to Successful Drawing

At the Mountains of Madness Vol. 2

How to Draw People: Step-By-Step Lessons for Figures and Poses

Treasures from the Patek Philippe Museum: Vol. 1: The Quest for the Perfect Watch (Patek Philippe Collection); Vol. 2: The Emergence of the Portable T

How Many Female Type Designers Do You Know?: I Know Many and Talked to Some!

The Introverted Artist: Defending My Art, My Way, Myself

Drawing the Head and Hands

The Art of the Occult: A Visual Sourcebook for the Modern Mystic

The Book of Change: Images and Symbols to Inspire Revelations and Revolutions

The World of Critical Role: The History Behind the Epic Fantasy

You Can Draw in 30 Days: The Fun, Easy Way to Learn to Draw in One Month or Less

Expedition: Being an Account in Words and Artwork of the 2358 A.D. Voyage to Darwin IV

A Black Gaze: Artists Changing How We See

It's Ok to Feel Things Deeply: (Uplifting Book for Women; Feel-Good Gift for Women; Books to Help Cope with Anxiety and Depression)

The Devil in the Gallery: How Scandal, Shock, and Rivalry Shaped the Art World

Tales from the Midnight Masquerade Color

A Visual Protest: The Art of Banksy

The Sleeve Should Be Illegal: & Other Reflections on Art at the Frick