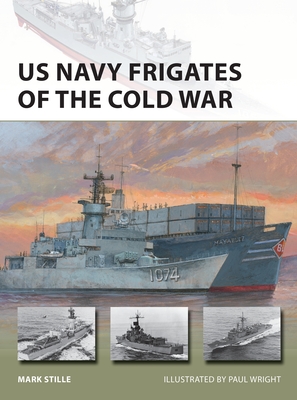 US Navy Frigates of the Cold War

A fresh, new study on the overlooked history of the backbone of the Cold War US Navy, the go-anywhere, do-anything frigate.

Though they were never the most glamorous of warships, found US Navy frigates were frequently found on the frontlines of the Cold War at sea. These warships were the descendants of World War II's destroyer escorts, designed primarily to escort convoys. They specialized in anti-submarine warfare, but were intended to be numerous, tough, versatile, and well-armed enough to show US naval power around the world, performing roles that varied from intercepting drug-smugglers to defending aircraft carriers. When the Cold War turned hot, frigates were often there. It was a US Navy frigate, Harold E. Holt, that conducted the US Navy's first hostile boarding action since 1826 during the SS Mayaguez incident. Frigates were at the forefront of operations in the Persian Gulf during the Tanker War, with the frigate USS Stark suffering a notorious Exocet attack by Iraqi warplanes, and proving the Oliver Hazard Perry-class's legendary toughness. This book explains how the technology and design of frigates changed during the Cold War, how the classes were modified to keep up to date, and explores the many varied missions they performed during the Cold War and since.

The Illustrated History of Guns: From First Firearms to Semiautomatic Weapons

Strike Hard and Expect No Mercy: A Tank Platoon Leader in Iraq

Strike Hard and Expect No Mercy: A Tank Platoon Leader in Iraq

The Archaeology of Weapons: Arms and Armour from Prehistory to the Age of Chivalry

Revolver: Sam Colt and the Six-Shooter That Changed America

Churchill's Band of Brothers: Wwii's Most Daring D-Day Mission and the Hunt to Take Down Hitler's Fugitive War Criminals

Army of the Roman Emperors

Military History: The Definitive Visual Guide to the Objects of Warfare

Weapon: A Visual History of Arms and Armor

Merchant of Death: Money, Guns, Planes, and the Man Who Makes War Possible

The Illustrated Encyclopedia of Rifles and Machine Guns

Arms and Armour of the Joust

Tiger I and Tiger II: Tanks of the German Army and Waffen-SS: Eastern Front 1944

Armies of the Vikings, Ad 793-1066: History, Organization and Equipment

The Tanks of Operation Barbarossa: Soviet Versus German Armour on the Eastern Front

The Best Enemy Money Can Buy

Arms and Armour of the Renaissance Joust

The Wind Book for Rifle Shooters: How to Improve Your Accuracy in Mild to Blustery Conditions

Sherman Tanks of the Red Army

German Tanks in Normandy 1944: The Panzer, Sturmgeschütz and Panzerjäger Forces That Faced the D-Day Invasion

I, Warbot: The Dawn of Artificially Intelligent Conflict

American Gun: A History of the U.S. in Ten Firearms

The Us M3/M3a1 Submachine Gun: The Complete History of America's Famed "Grease Gun"

The Hidden History of Guns and the Second Amendment

Vehicles and Heavy Weapons of the Vietnam War

Saps, Blackjacks and Slungshots: A History of Forgotten Weapons

The Big Book of Catapult and Trebuchet Plans!

The Essential M1 Garand: A Practical and Historical Guide for Shooters and Collectors

Tanks of the Second World War

Handbook for Shooters and Reloaders

Ak-47: The Weapon That Changed the Face of War

The Encyclopedia of Aircraft of World War II

Revolver: Sam Colt and the Six-Shooter That Changed America

12 Seconds of Silence: How a Team of Inventors, Tinkerers, and Spies Took Down a Nazi Superweapon

Gunpowder: Alchemy, Bombards, and Pyrotechnics: The History of the Explosive That Changed the World

The Rifle Musket in Civil War Combat: Reality and Myth

The Book of the Sword: With 293 Illustrations

The Silent Service in WWII: The Fleet Type Submarine

Handbook for Shooters and Reloaders

The Tiger Tank and Allied Intelligence: Capabilities and Performance

US Marine Corps in Vietnam: Vehicles, Weapons, and Equipment

Ford M8 and M20: The Us Army's Standard Armored Car of WWII

The Gunpowder Age: China, Military Innovation, and the Rise of the West in World History

The Writer's Guide to Weapons: A Practical Reference for Using Firearms and Knives in Fiction

Japanese Tanks and Armoured Warfare 1932-45: A Military and Political History

Tanks of D-Day 1944: Armor on the Beaches of Normandy and Southern France

The Battle of Hastings 1066 - The Uncomfortable Truth: Revealing the True Location of England's Most Famous Battle

The Tiger Tank and Allied Intelligence: The Tunisian Tigers

Autocannon: A History of Automatic Cannon and Their Ammunition

The Book of the Crossbow: With an Additional Section on Catapults and Other Siege Engines

Booby Traps!: The History of Deadly Devices, from World War I to Vietnam

The Tiger Tank and Allied Intelligence: Tiger 131: From Africa to Europe

Axis Forces on the Eastern Front

Stug III Sturmgeschutz III Ausfuhrung A to G (Sdkfz 142) Enthusiasts' Manual: An Insight Into the Development, Manufacture and Operation of the Second

Knifemaking: A Bladesmithing Guide on Forging Knives and Crafting Knife Sheaths with Simple Tools for Beginners

Dam Busters: The True Story of the Inventors and Airmen Who Led the Devastating Raid to Smash the German Dams in 1943

Armies of Ancient Italy 753-218 BC: From the Foundation of Rome to the Start of the Second Punic War

The Use of Medieval Weaponry

The Book of Deeds of Arms and of Chivalry: By Christine de Pizan

Bladesmithing for Beginners: Make Your First Knife in 7 Steps

Triumph and Tragedy: The Evolution and Legacy of 20th Century War Machines

Weapons of the Samurai

Japanese Swords: Cultural Icons of a Nation: The History, Metallurgy and Iconography of the Samurai Sword [With DVD]

Empire of Guns: The Violent Making of the Industrial Revolution

The New Weapons of the World Encyclopedia: An International Encyclopedia from 5000 B.C. to the 21st Century

The Art of Longsword Fighting: Teaching the Foundations of Sigmund Ringeck's Style

History of Tank Warfare: From World War I to the Present Day

Death Ride of the Panzers: German Armor and the Retreat in the West, 1944-45

Luger: The Story of the World's Most Famous Handgun

The Book of the Garand

A Knight and His Weapons

Das Reich: The March of the 2nd SS Panzer Division Through France, June 1944