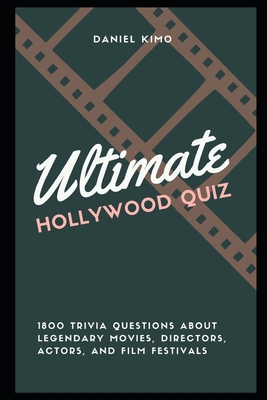 Do You Have Hollywood Dreams?Hollywood is responsible for laughs, tears, dramatic moments, deep thought, superhero flicks, car chases, and more consumption of expensive popcorn than anyone would ever have thought possible.Everyone has a film nerd inside them. This book celebrates that, and checks your Hollywood Nerd Quotient, through the hundreds of creative questions that give you clues of different types to guess film names.In the pages of this book, your knowledge of English language films will be tested in the following ways: - Through questions on the titles of films: Oscar winning blockbusters, obscure film school flicks, old films, new movies, traditional films, bold arthouses pieces - they're all represented!- Through hints relating to the year of release and directors: This book celebrates all that is great about the world's largest film industry, and the directors are an important part of that.- Through lateral thinking puzzles: In addition to the facts given above that will help you guess the movie that I have clued in each puzzle, I have also made sure to give you facts about the title, so that you can guess it through logic and your intelligence alone, even if one movie in ten is super obscure, and you probably have not heard of it. There are also detailed answers available at the end of the book.This book is very accessible - you will find it instructive and enjoyable whether you know the entirety of IMDB back to front, or whether you are a mere novice in the world of Hollywood trivia, and are just getting started on your starry eyed quest for stardom. The large number of questions and diverse question types ensure that you can spend dozens of hours on this book. It can also be enjoyed either by you individually, or with friends - sharing is caring!The book can also be used as an educational tool, and as an important tool that can help you discover new films that you didn't know existed. This is done by the feature where you can concentrate on a single director's output, or on works from a particular time range. Therefore, you will be entertained, you will feel nostalgia, your mind will get a workout, and you will discover new films, all at once.Lights, Camera, Action!

The Lure of the Vampire: Gender, Fiction, and Fandom from Bram Stoker to Buffy the Vampire Slayer

The Room: The Definitive Guide

The Worst Movies of All Time: Or : What Were They Thinking?

The Art of Turning Red

Marvel's Doctor Strange in the Multiverse of Madness: The Official Movie Special Book

Disney Tim Burton's the Nightmare Before Christmas: 13 Frights of Halloween

The Nightmare Before Christmas Tarot Deck and Guidebook

The Nightmare Before Christmas Tarot Deck and Guidebook Gift Set

Woodlands Dark and Days Bewitched: A Map of Folk Horror

Making the Best Years of Our Lives: The Hollywood Classic That Inspired a Nation

The Art of Love, Death + Robots

Part of My World: What I've Learned from the Little Mermaid about Love, Faith, and Finding My Voice

Peanuts: A Charlie Brown Christmas: The Official Advent Calendar (Featuring 5 Songs!): A Holiday Keepsake with Surprises Including Ornaments, Music, a

The Art of Princess Mononoke

The Method: How the Twentieth Century Learned to ACT

The Art of Zootopia

Tcm Underground: 50 Must-See Films from the World of Classic Cult and Late-Night Cinema

Jim Henson's Labyrinth: Bestiary: A Definitive Guide to the Creatures of the Goblin King's Realm

Hollywood's Spies: The Undercover Surveillance of Nazis in Los Angeles

The Anime Tarot Deck and Guidebook

The New York Times Book of Movies: The Essential 1,000 Films to See

The Magic of Minalima: Celebrating the Graphic Design Studio Behind the Harry Potter & Fantastic Beasts Films

Deanna Durbin, Judy Garland, and the Golden Age of Hollywood

The Goonies: The Official Coloring Book

From Hollywood with Love: The Rise and Fall (and Rise Again) of the Romantic Comedy

Harry Potter: Homemade: An Official Book of Enchanting Crafts, Activities, and Recipes for Every Season

Dark Carnivals: Modern Horror and the Origins of American Empire

You Are Tearing Me Apart, Lisa!: The Year's Work on the Room, the Worst Movie Ever Made