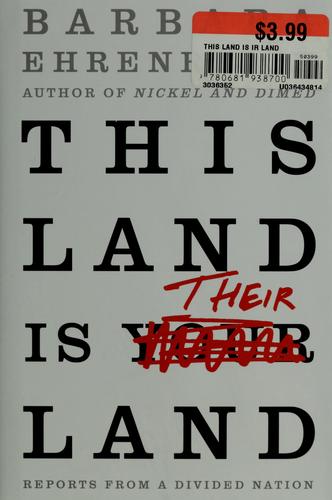 This Land is Their Land: Reports from a Divided Nation

America in the 'aughts--hilariously skewered, brilliantly dissected, and darkly diagnosed by the bestselling social critic hailed as the soul mate* of Jonathan Swift

Barbara Ehrenreich's first book of satirical commentary, The Worst Years of Our Lives, about the Reagan era, was received with bestselling acclaim. The one problem was the title: couldn't some prophetic fact-checker have seen that the worst years of our lives--far worse--were still to come? Here they are, the 2000s, and in This Land Is Their Land, Ehrenreich subjects them to the most biting and incisive satire of her career.

Taking the measure of what we are left with after the cruelest decade in memory, Ehrenreich finds lurid extremes all around. While members of the moneyed elite can buy congressmen, many in the working class can barely buy lunch. While a wealthy minority obsessively consumes cosmetic surgery, the poor often go without health care for their children. And while the corporate C-suites are now nests of criminality, the less fortunate are fed a diet of morality, marriage, and abstinence. Ehrenreich's antidotes are as sardonic as they are spot-on: pet insurance for your kids; Salvation Army fashions for those who can no longer afford Wal-Mart; and boundless rage against those who have given us a nation scarred by deepening inequality, corroded by distrust, and shamed by its official cruelty.

Full of wit and generosity, these reports from a divided nation show once again that Ehrenreich is, as Molly Ivins said, good for the soul.--*The Times (London)

A Woman's Guide to Cannabis: Using Marijuana to Feel Better, Look Better, Sleep Better-And Get High Like a Lady

This Is the Fire: What I Say to My Friends about Racism

Fear Unmasked 2.0: Killing the Spirit of Fear, Explaining the Great Reset, and Giving You an Action Plan America

Except for Palestine: The Limits of Progressive Politics

Surviving Your Dissertation: A Comprehensive Guide to Content and Process

The Rise of America: Remaking the World Order

Too Famous: The Rich, the Powerful, the Wishful, the Notorious, the Damned

Reading While Black: African American Biblical Interpretation as an Exercise in Hope

Every Minute Is a Day: A Doctor, an Emergency Room, and a City Under Siege

The Cannabis Encyclopedia: The Definitive Guide to Cultivation & Consumption of Medical Marijuana

A Mind of Their Own: Building Your Child's Emotional Wellbeing in a Post-Pandemic World

The Culture of Narcissism: American Life in an Age of Diminishing Expectations

You're Leaving When?: Adventures in Downward Mobility

Face: One Square Foot of Skin

Waking Up: A Guide to Spirituality Without Religion

The Raging 2020s: Companies, Countries, People - And the Fight for Our Future

Chasing Ghosts: A Tour of Our Fascination with Spirits and the Supernatural

The Empathy Diaries: A Memoir

An Ordinary Age: Finding Your Way in a World That Expects Exceptional

Whistling Vivaldi: How Stereotypes Affect Us and What We Can Do

Stewards of Humanity: Lighting the Darkness in Humanitarian Crisis

Controlling Women: What We Must Do Now to Save Reproductive Freedom

The Legend of Zelda 2022 Wall Calendar

Stranger Care: A Memoir of Loving What Isn't Ours

For All the People: Redeeming the Broken Promises of Modern Media and Reclaiming Our Civic Life

Letters to My White Male Friends

A Billion Hours of Good: Changing the World 14 Minutes at a Time

Being Heumann: An Unrepentant Memoir of a Disability Rights Activist

A History of My Brief Body