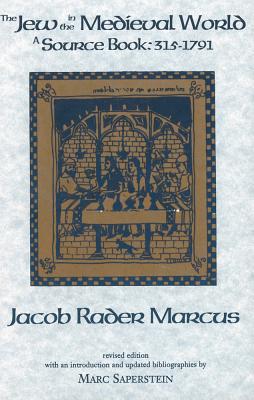 To gain an accurate view of medieval Judaism, one must look through the eyes of Jews and their contemporaries. First published in 1938, Jacob Rader Marcus's classic source book on medieval Judaism provides the documents and historical narratives which let the actors and witnesses of events speak for themselves. The medieval epoch in Jewish history begins around the year 315, when the emperor Constantine began enacting disabling laws against the Jews, rendering them second-class citizens. In the centuries following, Jews enjoyed (or suffered under) legislation, either chosen or forced by the state, which differed from the laws for the Christian and Muslim masses. Most states saw the Jews as simply a tolerated group, even when given favorable privileges. The masses often disliked them. Medieval Jewish history presents a picture wherein large patches are characterized by political and social disabilities. Marcus closes the medieval Jewish age (for Western Jewry) in 1791 with the proclamation of political and civil emancipation in France. The 137 sources included in the anthology include historical narratives, codes, legal opinions, martyrologies, memoirs, polemics, epitaphs, advertisements, folk-tales, ethical and pedagogical writings, book prefaces and colophons, commentaries, and communal statutes. These documents are organized in three sections: The first treats the relation of the State to the Jew and reflects the civil and political status of the Jew in the medieval setting. The second deals with the profound influence exerted by the Catholic and Protestant churches on Jewish life and well-being. The final section presents a study of the Jew at home, with four sub-divisions with treat the life of the medieval Jew in its various aspects. Marcus presents the texts themselves, introductions, and lucid notes. Marc Saperstein offers a new introduction and updated bibliography.

Jesus, I Trust in You: A 30-Day Personal Retreat with the Litany of Trust

If God Is Love, Don't Be a Jerk

My Utmost for His Highest Devotional Journal: Updated Language

Canceling Christianity: How The Left Silences Churches, Dismantles The Constitution, And Divides Our Culture

My Utmost for His Highest: Updated Language Gift Edition

The Case for Faith: A Journalist Investigates the Toughest Objections to Christianity

The Catholic Guide to Miracles: Separating the Authentic from the Counterfeit

The St. Gallen Mafia: Exposing the Secret Reformist Group Within the Church

The Greatest Gift: Unwrapping the Full Love Story of Christmas

Choice Privilege: Whats Race Got To Do With It?

What Is Life?: With Mind and Matter and Autobiographical Sketches

Finding Chika: A Little Girl, an Earthquake, and the Making of a Family

Stability: How an Ancient Monastic Practice Can Restore Our Relationships, Churches, and Communities

The Making of a Leader

Love Is the Way: Holding on to Hope in Troubling Times

Keys to the Deeper Life

Socialists Don't Sleep: Christians Must Rise or America Will Fall

Watch for the Light: Readings for Advent and Christmas

Better to Have Gone: Love, Death, and the Quest for Utopia in Auroville

Return of the God Hypothesis: Three Scientific Discoveries That Reveal the Mind Behind the Universe

Art and Faith: A Theology of Making

God and Cancel Culture: Stand Strong Before It's Too Late

What on Earth Am I Here For? Purpose Driven Life

You Who? Why You Matter and How to Deal with It

God's Promises for Your Every Need, NKJV

Stronger Than the Dark: Exploring the Intimate Relationship Between Running and Depression

Shadowland: From Jeffrey Epstein to the Clintons, from Obama and Biden to the Occult Elite: Exposing the Deep-State Actors at War

Healing a Shattered Soul: My Faithful Journey of Courageous Kindness after the Trauma and Grief of Domestic Terrorism

Unbound: A Practical Guide to Deliverance from Evil Spirits

Humility: The Journey Toward Holiness

The New Answers Book 1: Over 25 Questions on Creation/Evolution and the Bible

Heal Together Without Hurting Each Other

Authority in Prayer: Praying with Power and Purpose

The Lesser Key of Solomon

As a Man Thinketh

The Devil in Connecticut

Awareness: Conversations with the Masters

Choice Privilege: What's Race Got To Do With It?

Julian of Norwich: Wisdom in a Time of Pandemic-And Beyond

Listening to Your Life: Daily Meditations with Frederick Buechner

A Church in Crisis: Pathways Forward