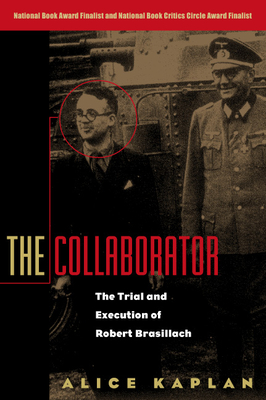 The Collaborator: The Trial and Execution of Robert Brasillach

On February 6, 1945, Robert Brasillach was executed for treason by a French firing squad. He was a writer of some distinction--a prolific novelist and a keen literary critic. He was also a dedicated anti-Semite, an acerbic opponent of French democracy, and editor in chief of the fascist weekly Je Suis Partout, in whose pages he regularly printed wartime denunciations of Jews and resistance activists. Was Brasillach in fact guilty of treason? Was he condemned for his denunciations of the resistance, or singled out as a suspected homosexual? Was it right that he was executed when others, who were directly responsible for the murder of thousands, were set free? Kaplan's meticulous reconstruction of Brasillach's life and trial skirts none of these ethical subtleties: a detective story, a cautionary tale, and a meditation on the disturbing workings of justice and memory, The Collaborator will stand as the definitive account of Brasillach's crime and punishment. A National Book Award Finalist A National Book Critics Circle Award Finalist A well-researched and vivid account.--John Weightman, New York Review of Books A gripping reconstruction of [Brasillach's] trial.--The New Yorker Readers of this disturbing book will want to find moral touchstones of their own. They're going to need them. This is one of the few works on Nazism that forces us to experience how complex the situation really was, and answers won't come easily.--Daniel Blue, San Francisco Chronicle Book Review The Collaborator is one of the best-written, most absorbing pieces of literary history in years.--David A. Bell, New York Times Book Review Alice Kaplan's clear-headed study of the case of Robert Brasillach in France has a good deal of current-day relevance. . . . Kaplan's fine book . . . shows that the passage of time illuminates different understandings, and she leaves it to us to reflect on which understanding is better.--Richard Bernstein, The New York Times

The Collaborator: The Trial & Execution of Robert Brasillach

The Man in the Iron Mask: The True Story of Europe's Most Famous Prisoner

Autumntide of the Middle Ages

Napoleon 1814: The Defence of France

To Kidnap a Pope: Napoleon and Pius VII

Trading with the Enemy: Britain, France, and the 18th-Century Quest for a Peaceful World Order

Napoleon and the Struggle for Germany: The Franco-Prussian War of 1813

The Fall of France: The Nazi Invasion of 1940

Court and Civic Society in the Burgundian Low Countries C.1420-1530

Pirating and Publishing: The Book Trade in the Age of Enlightenment

Algériennes: The Forgotten Women of the Algerian Revolution

The Belle Époque: A Cultural History, Paris and Beyond

Lest Innocent Blood Be Shed

Friends of the Revolution: The British Radical Community in Early Republican Paris 1792-1794

The Song of Roland

Occult Paris: The Lost Magic of the Belle Époque

Why Monet Matters: Meanings Among the Lily Pads

Paris, City of Dreams: Napoleon III, Baron Haussmann, and the Creation of Paris

The First Total War: Napoleon's Europe and the Birth of Warfare as We Know It

The Story of French

The Weidners in Wartime: Letters of Daily Survival and Heroism Under Nazi Rule

A Year in Paris: Season by Season in the City of Light

Acts of Resistance: Against the Tyranny of the Market

Strange Defeat: A Statement of Evidence Written in 1940

Surmounting the Barricades: Women in the Paris Commune

The Waning of the Middle Ages

The Englishman's Daughter: A True Story of Love and Betrayal in World War I

Letters from Spain, 80: A Seventeenth-Century French Noblewoman at the Spanish Royal Court

The Liberation of Paris: How Eisenhower, de Gaulle, and Von Choltitz Saved the City of Light

The Paris Commune: A Revolution in Democracy

French History: A Captivating Guide to the History of France, Charlemagne, and Notre-Dame de Paris

Who Killed My Father

The Lost King of France: How DNA Solved the Mystery of the Murdered Son of Louis XVI and Marie Antoinette

How the French Invented Love: Nine Hundred Years of Passion and Romance

After D-Day: The U.S. Army Encounters the French

Transnational France: The Modern History of a Universal Nation

Visualizing Empire: Africa, Europe, and the Politics of Representation

The Forbidden Best-Sellers of Pre-Revolutionary France

The Colonial Counter-Revolution: From de Gaulle to Sarkozy

The Creation of the French Royal Mistress: From Agnès Sorel to Madame Du Barry

Saving Mona Lisa: The Battle to Protect the Louvre and Its Treasures from the Nazis