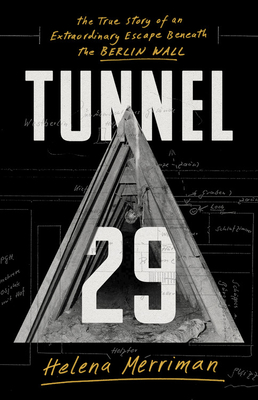 Based on a hit podcast series, this book tells the unbelievable true story of an escape tunnel under the Berlin Wall--the people who built it, the spy who betrayed it, and the media event it inspired.

In September 1961, at the height of the Cold War, 22-year-old Joachim Rudolph escaped from East Germany, one of the world's most brutal regimes. He'd risked everything to do it. Then, a few months later, working with a group of students, he picked up a spade... and tunneled back in.The goal was to tunnel into the East to help people escape. They spend months digging, hauling up carts of dirt in a tunnel ventilated by stove pipes. But the odds are against them: a Stasi agent infiltrates their group and on their first attempt, and dozens of escapees and some of the diggers are arrested and imprisoned. Despite the risk of prison and death, a month later, Joachim and the other try again and hit more bad luck: the tunnel springs a leak. After several attempts, run-ins with a spy and secret police, and some unlikely financial aid from an American TV network, they finally break through into the East, and free 29 people.
This is the story of their great escape, the NBC documentary crew that filmed it, and the U.S. government's attempts to block the film from ever seeing the light of day. But more than anything, this is the story of what people will do to be free.

When Money Dies: The Nightmare of Deficit Spending, Devaluation, and Hyperinflation in Weimar Germany

The Family Tree German Genealogy Guide: How to Trace Your Germanic Ancestry in Europe

Blood and Iron: The Rise and Fall of the German Empire

A Hangman's Diary: The Journal of Master Franz Schmidt, Public Executioner of Nuremberg, 1573-1617

Singing Like Germans: Black Musicians in the Land of Bach, Beethoven, and Brahms

The Shortest History of Germany: From Julius Caesar to Angela Merkel--A Retelling for Our Times

Jena 1800: The Republic of Free Spirits

Hitler's American Model: The United States and the Making of Nazi Race Law

The Decline of the West, Two Volumes in One

In His Own Words: The Essential Speeches of Adolf Hitler

The Escape Artists: A Band of Daredevil Pilots and the Greatest Prison Break of the Great War

National Socialism - Its Principles and Philosophy

Operation Pedestal: The Fleet That Battled to Malta, 1942

The Coming of the Third Reich

Doctors from Hell: The Horrific Account of Nazi Experiments on Humans

The SS Dirlewanger Brigade: The History of the Black Hunters

Before the Deluge: Portrait of Berlin in the 1920s, a

The Hour of Decision

Rahel Varnhagen: The Life of a Jewish Woman

Hitler's Monsters: A Supernatural History of the Third Reich

Berlin: Life and Death in the City at the Center of the World

A Child of Hitler: Germany in the Days When God Wore a Swastika

Stasiland: Stories from Behind the Berlin Wall

Weimar Culture: The Outsider as Insider

Hitler's Winter: The German Battle of the Bulge

A Most Dangerous Book: Tacitus's Germania from the Roman Empire to the Third Reich

The Myth of the 20th Century

Destined to Witness: Growing Up Black in Nazi Germany

Secret Projects of the Luftwaffe: Messerschmitt Me 262

The Young Hitler I Knew: A Boyhood Friend Recounts Growing Up with the Future Fuhrer of the Third Reich

Endpapers: A Family Story of Books, War, Escape, and Home

The Myth of the 20th Century

Bending Spines: The Propagandas of Nazi Germany and the German Democratic Republic

Learning from the Germans: Race and the Memory of Evil

Porcelain: A History from the Heart of Europe

Travelers in the Third Reich

Night of the Assassins: The Untold Story of Hitler's Plot to Kill Fdr, Churchill, and Stalin

Ravenous: Otto Warburg, the Nazis, and the Search for the Cancer-Diet Connection

The Nazi Seizure of Power: The Experience of a Single German Town, 1922-1945, Revised Edition

Gone with the World Wars: God's Love Heals All Wounds

Reluctant Accomplice: A Wehrmacht Soldier's Letters from the Eastern Front

In Hitler's Munich: Jews, the Revolution, and the Rise of Nazism

1939: A People's History of the Coming of the Second World War

Inside the Third Reich

The Third Reich in Power

Tigers in the Mud: The Combat Career of German Panzer Commander Otto Carius

Unholy Alliance: A History of Nazi Involvement with the Occult

Ravenous: Otto Warburg, the Nazis, and the Search for the Cancer-Diet Connection

Ravensbruck: Life and Death in Hitler's Concentration Camp for Women

Gold in the Furnace

Burning Down the Haus: Punk Rock, Revolution, and the Fall of the Berlin Wall

The Faithful Executioner: Life and Death, Honor and Shame in the Turbulent Sixteenth Century

The Nazis and the Occult: The Third Reich's Search for Supernatural Powers

Citizen 865: The Hunt for Hitler's Hidden Soldiers in America

Halfway to America: The Tragic Sinking of the William Nelson

Permanent Crisis: The Humanities in a Disenchanted Age

Roma. Portrait of a City

The Bohemians: The Lovers Who Led Germany's Resistance Against the Nazis

The Third Reich Is Listening: Inside German Codebreaking 1939-45

Builders of the Third Reich: The Organisation Todt and Nazi Forced Labour

Kampfgruppe Peiper at the Battle of the Bulge

The Pink Triangle: The Nazi War Against Homosexuals

Operation Barbarossa and Germany's Defeat in the East

Karl Barth: A Life in Conflict

Ghost Riders: When US and German Soldiers Fought Together to Save the World's Most Beautiful Horses in the Last Days of World War II

A Demon-Haunted Land: Witches, Wonder Doctors, and the Ghosts of the Past in Post-WWII Germany

Never in Finer Company: The Men of the Great War's Lost Battalion

If the Allies Had Fallen: Sixty Alternate Scenarios of World War II

In His Own Words: The Essential Speeches of Adolf Hitler

Beyond the Wall. Art and Artifacts from the Gdr

The Krampus and the Old, Dark Christmas: Roots and Rebirth of the Folkloric Devil

Hitler in Argentina: The Documented Truth of Hitler's Escape from Berlin

Endpapers: A Family Story of Books, War, Escape, and Home

Lucifer's Court: A Heretic's Journey in Search of the Light Bringers

Mengele: Unmasking the Angel of Death

Hammer of the Gods: The Thule Society and the Birth of Nazism

The War of the Poor

Gone with the World Wars: God's Love Heals All Wounds

Blood Red Snow: The Memoirs of a German Soldier on the Eastern Front

The Virtuous Wehrmacht: Crafting the Myth of the German Soldier on the Eastern Front, 1941-1944

German History: A Captivating Guide to the History of Germany and Germania

Through Innocent Eyes: The Chosen Girls of the Hitler Youth

To the Gates of Stalingrad: Soviet-German Combat Operations, April-August 1942?the Stalingrad Trilogy, Volume I