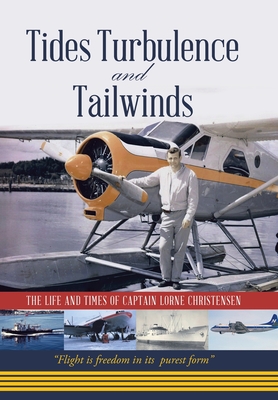 Tides and Tailwinds The life story of Lorne Christensen begins with the history of his Danish immigrant great-grandfather Captain James Christensen, his grandfather Captain Andy Christensen, each noted mariners, and his dad, BC Provincial Police Constable Bill Christensen. Lorne recounts his childhood and his escapades vacationing with his grandmother at the remote logging community of Port Renfrew in the 1940s and 1950s. Joining the Air Force at 17 he trained as an aircraft mechanic, and attracted to the lure of the skies, went on to obtain his private pilot's license in 1960. Unsure of where his future would lead him, and grounded in his family's seafaring history, he ventured into a maritime life by becoming a seaman on the naval auxiliary vessels at the Naval Dockyard in Esquimalt BC. His interest in flying won out, and by 1963 his first opportunity came, as a dock boy with a float plane company in Campbell River. Becoming a commercial pilot he gained much valuable experience with local flying firms on British Columbia's rugged and weather-variable coast. Moving on, he found one of his most fascinating experiences as pilot for the Honourable Phil Gaglardi, BC's Minister of Highways. From there, his flying career took him to the prairies, the Yukon and High Arctic, the east coast, Quebec and Ontario. He flew from the North Pole to the Caribbean, from Alaska to Greenland and all places in between. Aircraft flown included DC3, DC4, C46, FH227, L188 (Electras), Boeing 737s and numerous others. Holding a pilot's license for 50 years, Lorne's last flight on the B737 took place at the age of 73 in 2010.

The Great Air Race: Glory, Tragedy, and the Dawn of American Aviation

Nightmare on the Scottie: The Maiden Voyage of a Doomed King Crabber

The Naval Academy - A Parent's Ponderings from Home Port: Untying the Bowline on I-Day

Wherever You Are Tonight: Love and War in the Forgotten Theater of World War II

From the Prairie to the Pacific: A Blue Angel's Journey

The Boy Who Fell to Shore: The Extraordinary Life and Mysterious Disappearance of Thomas Thor Tangvald

Floating in Darkness: An Air Force Top Gun's True Story of Dogfights, Spaceflights, and Discovering Our Place in the Universe

Demystiflying: How to Become a Pilot for Those Who Don't Speak Pilot

Elon Musk: The Biography of the Billionaire Entrepreneur making the Future Fantastic; Owner of Tesla, SpaceX, and Twitter

Flying to Extremes: Memories of a Northern Bush Pilot

My Shenandoah: The Story of Captain Robert S. Douglas and His Schooner

From the Prairie to the Pacific: A Blue Angel's Journey

Skinning Out: My time at sea and jumping ship in New Zealand

The View from Split Rock: A Lighthouse Keeper's Life

The Workhorse of Helmand: A Chinook Crewman's Account of Operations in Afghanistan and Iraq

Flight from the Croft

The Heroes We Needed: The B-29ers Who Ended World War II and My Fight to Save the Forgotten Stories of the Greatest Generation

The Boy Who Fell to Shore: The Extraordinary Life and Mysterious Disappearance of Thomas Thor Tangvald

Where the Sea Breaks Its Back: The Epic Story of the Early Naturalist Georg Steller and the Russian Exploration of Alaska

Wings for Val: Memoir of a Young Female Pilot

In the Treacle Mine: The Life of a Marine Engineer

Flying Free: My Victory Over Fear to Become the First Latina Pilot on the Us Aerobatic Team

I Had a Row with a German: A Battle of Britain Casualty

Hunt for Gold: Sunken Galleons in the New World

Wherever You Are Tonight: Love and War in the Forgotten Theater of World War II

Flying with Dad: A Daughter. A Father. And the Hidden Gifts in His Stories from World War II.

The Shell and the Octopus: A Memoir

We Called Ourselves Rocketboatmen: :: The Untold Stories of the Top-Secret LSC(S) Rocket Boat Missions of World War II at Sicily, Normandy (Omaha and

Johnnie Johnson's 1942 Diary: The War Diary of the Spitfire Ace of Aces

Lindbergh in Montana: An Air Adventurer Leaves a Legacy in the Treasure State

D-Day, Arnhem and the Rhine: A Glider Pilot's Memoir

Ace in a Day: The Memoir of an Eighth Air Force Fighter Pilot in World War II

Speed: The Life of a Test Pilot and Birth of an American Icon

Canoe for Change: A Journey Across Canada

Luftwaffe Aces in the Battle of Britain

Free French Spitfire Hero: The Diaries of and Search for René Mouchotte

The Men Who Flew the Heavy Bombers: RAF and Usaaf Four-Engine Heavies in the Second World War

Three Years in a 12-Foot Boat

Trusting God: With Faith, Failure Is Not...

80 Years, a Tribute to the Pby Catalina: The Ultimate Color Photo Album of the Best Flying Boat Ever Made

The First Fighter Pilot - Roland Garros: The Life and Times of the Playboy Who Invented Air Combat

Orange Tails and Vapour Trails: Wind in the Wires to Glass Cockpits - A Pilot Remembers

The Last American Hero: The Remarkable Life of John Glenn

Forgotten Heroes of the Battle of Britain

Wager with the Wind: The Don Sheldon Story

Empires of the Sky: Zeppelins, Airplanes, and Two Men's Epic Duel to Rule the World

First Crossing: The 1919 Trans-Atlantic Flight of Alcock and Brown

The Disappearing ACT: The Impossible Case of Mh370

Sundowner of the Skies

Escape Fever: An Airman's Escape from the Kaiser's Germany

Faces of the Few: The Battle for Survival in the Summer of 1940

A Sea-Dog of Devon: A Life of Sir John Hawkins, English Naval Commander, Privateer and Slaver of the 16th Century

Nerves of Steel: How I Followed My Dreams, Earned My Wings, and Faced My Greatest Challenge

Where the Sea Breaks Its Back: The Epic Story of the Early Naturalist Georg Steller and the Russian Exploration of Alaska

To North Vietnam and Back Again: A Personal Account of Navy A-6 Intruder Operations in Vietnam

Nightstalkers: The Wright Project and the 868th Bomb Squadron in World War II

James Cook: The Illustrated Accounts of Three Epic Pacific Voyages (The Life and Legacy of the Legendary British Explorer Who Disc

Turbulence: Fifty Years on the Leading Edge of the Airline Industry

Scouts Out!: A Kiowa Warrior Pilot's Perspective of War in Afghanistan

Life in a Spin: The Riveting Revelations of an International Helicopter Pilot

Mr. MiG: and The Real Story of the First MiGs in America

Saga of an Aviation Survivor

A Star to Steer By

The Self Improver: A Pilot's Journey

And I Lived to Tell the Tales: The Life of a Fighter Pilot

Ocean Bound Women: Sisters Sailing Around the World in the 1880s - The Adventures-The Ship-The People

Where Dolphins Walk: A Memoir of Bridging National Lifestyles, Positive Change and Powers of Silence

Mr. MiG: and The Real Story of the First MiGs in America

Bells Across Cardigan Bay: The Memoir of a Borth Master Mariner

From the Spitfire Cockpit to the Cabinet Office: The Memoirs of Air Commodore J F 'Johnny' Langer CBE Afc DL

A Story about a Real Man

Mavericks & Merlins: Sailors and Renegades Leave Shore, What about You?

81 Lessons From The Sky

Memories of the U.S.S. Mississippi

The Naval Academy: A Parent's Ponderings from Home Port

This Is Your Captain Speaking: Reaching for the Sky Despite a Lifetime of Abuse, Depression and Fear

Manners Will Take You Where Brains and Money Won't: Wisdom from Momma and 35 Years at NASA

Sky Rider: Park Van Tassel and the Rise of Ballooning in the West

Checklist Complete: Stories from my life in aviation

Wet Pay: Stories from my Career as a Commercial Diver

Up in the Air: The Real Story of Life Aboard the World's Most Glamorous Airline

The First Fighter Pilot - Roland Garros: The Life and Times of the Playboy Who Invented Air Combat

Real Stories from a Nuclear Submariner

The Boy Who Grew Wings

On the Edge of Flight: A Lifetime in the Development and Engineering of Aircraft

Slow Boat Nekkid: A 5-Year Voyage of Fun and Adventure

Ocean Bound Women: Sisters Sailing Around the World in the 1880s - The Adventures-The Ship-The People

The Man in the Arena: The Story of an Aviator's Roller-Coaster Ride to the Clouds and Back

Shooting Down the Stealth Fighter: Eyewitness Accounts from Those Who Were There

101 Lessons From The Sky

A Unique World of People, Things and Adventures

UA Flight 93.It Wasn't A Crash

The Wind Beneath My Wings

Beneath the Blades: Humorous Confessions of a Chopper Pilot

Charlie: A journey from the Aussie bush to battle skies far away

A Life of Matthew Fontaine Maury;The Father of Modern Oceanography

The Lost Boys of Montauk: The True Story of the Wind Blown, Four Men Who Vanished at Sea, and the Survivors They Left Behind (Large Print Edition)

The Life and Voyages of Christopher Columbus: His Discovery and Exploration of the Americas

Down to Sea in Little Boats

Never a Dull Moment: A Memoir of Canadian Naval Aviation, Firebombing and Theatre

Archie's Lights: The Life and Times of a Scottish Lightkeeper

Charles Lindbergh: A Religious Biography of America's Most Infamous Pilot

From Hero to Zero: The truth behind the ditching of DC-3, VH-EDC in Botany Bay that saved 25 lives

A Life on the Line: A MICA Flight Paramedic's Story

The Disappearing ACT: The Impossible Case of Mh370

The Flight to Excellence: Soaring to New Heights in Business and Life

The History of Aviation: A Century of Powered Flight Day by Day

From School to Sky: Joseph's Tale of War

Joe Foss Flying Marine: The Story of his Flying Circus

The Journals of Captain Cook

Radio Knobs and Scope Dopes: Behind the Scenes in the Air Navigation System

Never a Dull Moment: A Memoir of Canadian Naval Aviation, Firebombing and Theatre

They Called Me Sky Hunter

Chasing the Moon: The People, the Politics, and the Promise That Launched America Into the Space Age

Flying Used to Be Fun

They Called Me Sky Hunter

Against the Wind: Hope Sees the Invisible 2nd Edition

Rascal and Me: A Voyage Around the Eastern U.S. and Parts of Canada Alone

Back to the Bennington: Tales in the Wake

A Barnstormer Aviator: My personal journey to scarf and goggles flying in the 1930s

Turn and Burn: A Fighter Pilot's Memories and Confessions