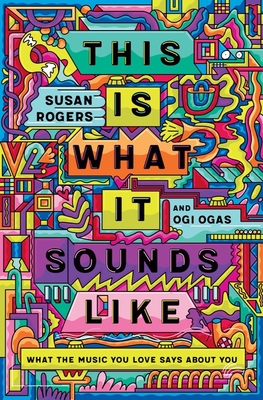 This Is What It Sounds Like: What the Music You Love Says about You

This Is What It Sounds Like is a journey into the science and soul of music that reveals the secrets of why your favorite songs move you. But it's also a story of a musical trailblazer who began as a humble audio tech in Los Angeles to became Prince's chief engineer for Purple Rain, and then create other No. 1 hits (including Barenaked Ladies' One Week) as one of the most successful female record producers of all time.

Now an award-winning professor of cognitive neuroscience, Susan Rogers leads readers to musical self-awareness. She explains that we each possess a unique listener profile based on our brain's natural response to seven key dimensions of any song. Are you someone who prefers lyrics or melody? Do you like music above the neck (intellectually stimulating), or below the neck (instinctual and rhythmic)? Whether your taste is esoteric or mainstream, Rogers guides readers to recognize their musical personality, and offers language to describe one's own unique taste. Like most of us, Rogers is not a musician, but she shows that all of us can be musical--simply by being an active, passionate listener.

While exploring the science of music and the brain, Rogers also takes us behind the scenes of record-making, using her insider's ear to illuminate the music of Prince, Frank Sinatra, Kanye West, Lana Del Rey, and many others. She shares records that changed her life, contrasts them with those that appeal to her coauthor and students, and encourages you to think about the records that define your own identity.

Told in a lively and inclusive style, This Is What It Sounds Like will refresh your playlists, deepen your connection to your favorite artists, and change the way you listen to music.

Journey of the Mind: How Thinking Emerged from Chaos

A Billion Wicked Thoughts: What the Internet Tells Us about Sexual Relationships

Dark Horse: Achieving Success Through the Pursuit of Fulfillment

Teach Yourself to Play Ukulele: Standard Tuning [With 2 CDs]

Masterwork Duets for Women: 8 Standards from the Baroque, Classical, and Romantic Periods

Symphony No. 3 in D Minor for Alto Solo, Choirs and Orchestra

Sounds of the Orchestra

Teaching Music to Children: A Curriculum Guide for Teachers Without Music Training [With CD (Audio)]

Mallet Madness: A Collection of Engaging Units for Using Mallet Instruments and Drums in the Music Classroom

Parachutes and Ribbons and Scarves, Oh My!: Listening Lessons with Movement Props

I Can Read Music, Vol 1: A Note Reading Book for Cello Students

How to Play Piano & Keyboard: Easy-To-Use, Easy-To-Carry; Perfect for Every Age

How to Listen to Jazz

Survival Guide for the Modern Drummer: A Crash Course in All Musical Styles for Drumset, Book & Online Audio/Software

Step by Step 1b -- An Introduction to Successful Practice for Violin: Book & CD

You Can Teach Yourself Banjo

The Music Lesson: A Spiritual Search for Growth Through Music

Musicophilia: Tales of Music and the Brain

How to Read Music in 30 Days: Music Theory for Beginners - with exercises & online audio

Once Upon a Folktale: Eight Classic Stories with Easy Songs and Stick Puppet Drawings

Elementary Method for the Piano, Op. 101

The Only Guitar Book You'll Ever Need: From Tuning Your Instrument and Learning Chords to Reading Music and Writing Songs, Everything You Need to Play

Year of Wonder: Classical Music to Enjoy Day by Day

In Defense of Ska

Raise the Song: A Classical Christian Guide to Music Education

How To Really Play The Piano: The Stuff Your Teacher Never Taught You

Music Game of the Week: A Year's Worth of Reproducible Activities for the Classroom or Home

ACT for Musicians: A Guide for Using Acceptance and Commitment Training to Enhance Performance, Overcome Performance Anxiety, and Improve

How to Play Ukulele: A Complete Guide for Beginners

How to Write Songs on Keyboards: A Complete Course to Help You Write Better Songs [With CD]

Celine Dion's Let's Talk about Love: A Journey to the End of Taste

Piano Pieces for the Adult Beginner

Learn to Play Piano in Six Weeks or Less: Volume 1

The Psychology of Music: A Very Short Introduction

What to Listen for in Music

Play It! Christmas Songs: A Superfast Way to Learn Awesome Songs on Your Piano or Keyboard

Stick Technique: The Essential Guide for the Modern Drummer

Get More Fans: The DIY Guide to the New Music Business (2021 Edition)

Teach Yourself to Play Guitar Chords: A Quick and Easy Introduction for Beginners

Principles of Violin Playing and Teaching

How to Play Piano: An easy course for adult beginners

The Mysticism of Sound and Music: The Sufi Teaching of Hazrat Inayat Khan

What Life Should Mean To You

Get to the Point!: A Collection of Pointing Pages and Powerful Plans

Rudimental Jazz: A Musical Application of Rudiments to the Drumset

The Guitar Handbook: A Unique Source Book for the Guitar Player - Amateur or Professional, Acoustic or Electrice, Rock, Blues, Jazz, or Fol

A Creative Approach to Music Fundamentals

The Piano: A History in 100 Pieces

The Spirit of Music: The Lesson Continues

Music at Your Fingertips: Advice for the Artist and Amateur on Playing the Piano

Harp Exercises for Agility and Speed

Symphonies for the Soul: Classical Music to Cure Any Ailment

Baritone Ukulele Aerobics: For All Levels: From Beginner to Advanced

The Studio Builder's Handbook: How to Improve the Sound of Your Studio on Any Budget, Book & Online Video/Pdfs

Solos for Young Violinists, Vol 3: Selections from the Student Repertoire

How to Play Keyboard for Kids: a definitive and complete keyboard book for beginners

Ukulele for Beginners: How to Play Ukulele in Easy-To-Follow Steps

Everybody Loves Our Town: An Oral History of Grunge

What to Teach When - Grades K-1: A Thoughtful and Engaging Music Curriculum

First, We Sing! Kodaly-Inspired Teaching for the Music Classroom

On the Performance of the Music of Mozart

Anatomy of the Voice: An Illustrated Guide for Singers, Vocal Coaches, and Speech Therapists

The Drummer's Bible: How to Play Every Drum Style from Afro-Cuban to Zydeco [With 2 CDs]

Songleading: A Work of Art

Psychotic Reactions and Carburetor Dung: The Work of a Legendary Critic: Rock'n'roll as Literature and Literature as Rock 'N'roll

Method for the Recorder - Part 1

Guide to the Practical Study of Harmony

Toccata: From Sonata in A, Score & Parts

How to Read Music: The Fundamentals of Music Notation Made Easy