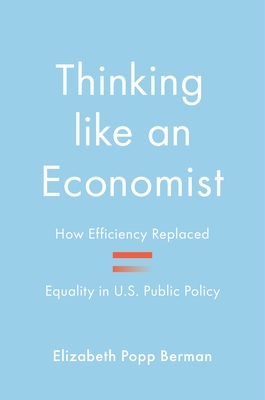 For decades, Democratic politicians have frustrated progressives by tinkering around the margins of policy while shying away from truly ambitious change. What happened to bold political vision on the left, and what shrunk the very horizons of possibility? In Thinking Like an Economist, Elizabeth Popp Berman tells the story of how a distinctive way of thinking--an economic style of reasoning--became dominant in Washington between the 1960s and the 1980s and how it continues to dramatically narrow debates over public policy today. Introduced by liberal technocrats who hoped to improve government, this way of thinking was grounded in economics but also transformed law and policy. At its core was an economic understanding of efficiency, and its advocates often found themselves allied with Republicans and in conflict with liberal Democrats who argued for rights, equality, and limits on corporate power. By the Carter administration, economic reasoning had spread throughout government policy and laws affecting poverty, healthcare, antitrust, transportation, and the environment. Fearing waste and overspending, liberals reined in their ambitions for decades to come, even as Reagan and his Republican successors argued for economic efficiency only when it helped their own goals. A compelling account that illuminates what brought American politics to its current state, Thinking Like an Economist also offers critical lessons for the future. With the political left resurgent today, Democrats seem poised to break with the past--but doing so will require abandoning the shibboleth of economic efficiency and successfully advocating new ways of thinking about policy.

The Redstone Diary 2023: In Search of Beauty

A Good Time for the Truth: Race in Minnesota

Bury Me Standing: The Gypsies and Their Journey

Blueprint: The Evolutionary Origins of a Good Society

Seek and Hide: The Tangled History of the Right to Privacy

Growth: From Microorganisms to Megacities

A Paradise Built in Hell: The Extraordinary Communities That Arise in Disaster

Ecology of Fear: Los Angeles and the Imagination of Disaster

Regarding the Pain of Others

The Lie about the Truck: Survivor, Reality Tv, and the Endless Gaze

We the People: A Progressive Reading of the Constitution for the Twenty-First Century

How Many People Can the Earth Support

Bring That Beat Back: How Sampling Built Hip-Hop

But What If We're Wrong?: Thinking about the Present as If It Were the Past

Good Chemistry: The Science of Connection, from Soul to Psychedelics

The End of Poverty: Economic Possibilities for Our Time

We Were Eight Years in Power: An American Tragedy

State and Revolution in Finland

Collapse : How Societies Choose To Fail or Succeed

Guns, Germs, and Steel : The Fates of Human Societies

Five Days at Memorial: Life and Death in a Storm-Ravaged Hospital

On Critical Race Theory: Why It Matters & Why You Should Care

The Case of the Vanishing Blonde: And Other True Crime Stories

Religion for Atheists: A Non-Believer's Guide to the Uses of Religion

On the Run: Fugitive Life in an American City

The Affordable City: Strategies for Putting Housing Within Reach (and Keeping It There)

Anti-Racist Ally: An Introduction to Activism and Action

If You Give a Mouse an iPhone

Whose Story Is This?: Old Conflicts, New Chapters

The Disappearance of Childhood

At Home on an Unruly Planet: Finding Refuge on a Changed Earth

The Control of Nature

Stuff White People Like: A Definitive Guide to the Unique Taste of Millions

More Than Two: A Practical Guide to Ethical Polyamory

Behind the Beautiful Forevers: Life, Death, and Hope in a Mumbai Undercity

Madame Clairevoyant's Guide to the Stars: Astrology, Our Icons, and Our Selves

Them: Adventures with Extremists

The World Without Us

Psychedelics and Spirituality: The Sacred Use of Lsd, Psilocybin, and Mdma for Human Transformation

Marx at the Arcade: Consoles, Controllers, and Class Struggle

The Genesis of Rebellion: Governance, Grievance, and Mutiny in the Age of Sail

The Flowers of Evil: The Award-Winning Translation

Wild Words: A Collection of Words from Around the World That Describe Happenings in Nature

The Day the World Stops Shopping: How Ending Consumerism Saves the Environment and Ourselves

Out of the Sun: On Race and Storytelling

Making Capitalism: The Social and Cultural Construction of a South Korean Conglomerate

Mystery: A Seduction, a Strategy, a Solution

Breaking News: The Remaking of Journalism and Why It Matters Now

Neon Girls: A Stripper's Education in Protest and Power

The Race Beat: The Press, the Civil Rights Struggle, and the Awakening of a Nation

Understanding Media: The Extensions of Man

The Signal and the Noise: Why So Many Predictions Fail-But Some Don't

The News: A User's Manual

Making Sense: Conversations on Consciousness, Morality, and the Future of Humanity

How You Say It: Why We Judge Others by the Way They Talk--And the Costs of This Hidden Bias