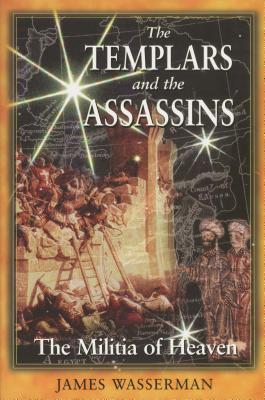 The Templars and the Assassins: The Militia of Heaven

- An examination of the interactions of the Christian Knights Templar and their Muslim counterparts, the Assassins, and of the profound changes in Western society that resulted. - Restores the reputation of the secret Muslim order of the Assassins, disparaged as the world's first terrorist group. - Dispels many myths about the Knights Templar and provides the most incisive portrait of them to date. A thousand years ago Christian battled Muslim for possession of a strip of land upon which both their religions were founded. These Crusades changed the course of Western history, but less known is the fact that they also were the meeting ground for two legendary secret societies: The Knights Templar and their Muslim counterparts, the Assassins. In The Templars and the Assassins: The Militia of Heaven, occult scholar and secret society member James Wasserman provides compelling evidence that the interaction of the Knights Templar and the Assassins in the Holy Land transformed the Templars from the Pope's private army into a true occult society, from which they would sow the seeds of the Renaissance and the Western Mystery Tradition. Both orders were destroyed as heretical some seven hundred years ago, but Templar survivors are believed to have carried the secret teachings of the East into an occult underground, from which sprang both Rosicrucianism and Masonry. Assassin survivors, known as Nizari Ismailis, flourish to this day under the spiritual leadership of the Aga Khan. Wasserman strips the myths from both groups and penetrates to the heart of their enlightened beliefs and rigorous practices, delivering the most probing picture yet of these holy warriors.

Jesus Wants to Save Christians: A Manifesto for the Church in Exile

Apocalypse and the Millennium in the American Civil War Era

Setting the World on Fire: The Brief, Astonishing Life of St. Catherine of Siena

The Foundations of Dialogue in Science and Religion

Liturgy as a Way of Life: Embodying the Arts in Christian Worship

Handmaidens of the Lord: Pentecostal Women Preachers and Traditional Religion

Learning to Walk in the Dark

Catholic Book of Prayers for Children

MEDITATIONS : ON THE MONK WHO DWELLS IN Daily Life

Forgotten God: Reversing Our Tragic Neglect of the Holy Spirit

Love and Respect Workbook: The Love She Most Desires; The Respect He Desperately Needs

A Holy and Living Sacrifice

The Resurrection According to Matthew, Mark and Luke

Eve in Exile and the Restoration of Femininity

The Problem of Pain

Revealing Revelation: How God's Plans for the Future Can Change Your Life Now

The Pursuit of God: Updated Edition with Study Guide

A More Excellent Way: Be in Health [With DVD]

Perfectly Suited: The Armor of God for the Anxious Mind

Communion of the Sick: Approved Rites for Use in the United States of America Excerpted from Pastoral Care of the Sick and Dying in English a

Get Your Life Back: Everyday Practices for a World Gone Mad

Jesus and John Wayne: How White Evangelicals Corrupted a Faith and Fractured a Nation

Revealing Revelation Workbook: How God's Plans for the Future Can Change Your Life Now

Liturgy of the Hours Inserts

Man & Woman He Created Them (Tob)

In Plain View: The Daily Lives of Amish Women

The Bishop of the Abandoned Tabernacle: Saint Manuel Gonzalez Garcia

The Privilege of Being a Woman

The Promise of Heaven (Pack of 25)

Mysteries of the Anointing

The Case for Heaven: A Journalist Investigates Evidence for Life After Death

The Sacred Mushroom and The Cross: A study of the nature and origins of Christianity within the fertility cults of the ancient Near East

Catechism of the Catholic Church: Complete and Updated

One Minute After You Die (Pack of 25)

Jesus and John Wayne: How White Evangelicals Corrupted a Faith and Fractured a Nation

Radically Apostolic: The Reality, the Journey, and the Reward of the Call of God!

Savior: The Story of Jesus Christ

The Once and Future Roman Rite: Returning to the Traditional Latin Liturgy After Seventy Years of Exile

No Turning Back: A Witness to Mercy, 10th Anniversary Edition

On Earth as in Heaven: Theopolis Fundamentals

Help Is Here: Finding Fresh Strength and Purpose in the Power of the Holy Spirit

All Creation Waits: The Advent Mystery of New Beginnings

Heaven, an Unexpected Journey: One Man's Experience with Heaven, Angels, and the Afterlife

Bridges Between US: A Pathway to Unity Through Faith, Empathy & Mutual Understanding

The Glory of Christ

The Case for Catholicism: Answers to Classic and Contemporary Protestant Objections

Easy to Read Bible Summary for Teens and Adults

Resilient: Restoring Your Weary Soul in These Turbulent Times

Liturgy of the Hours

Misquoting Jesus: The Story Behind Who Changed the Bible and Why

The Christmas Promise Storybook: A True Story from the Bible about God's Forever King

Forgiveness: The Freedom to Let Go

Bring Your Hammer: 28 Tools Dads Can Grab From the Book of Nehemiah

Live Your Truth and Other Lies: Exposing Popular Deceptions That Make Us Anxious, Exhausted, and Self-Obsessed

After the Revolution: Sex and the Single Evangelical

The Falling Away: Spiritual Departure or Physical Rapture?: A Second Look at 2 Thessalonians 2:3

I Dared to Call Him Father: The Miraculous Story of a Muslim Woman's Encounter with God

Savior: The Story of Jesus Christ

Into the Silent Land: A Guide to the Christian Practice of Contemplation

Amidst Us Our Beloved Stands: Recovering Sacrament in the Baptist Tradition

The Rise of the Micaiah Prophet: A Call to Purity in Prophetic Ministry

Unsettling Truths: The Ongoing, Dehumanizing Legacy of the Doctrine of Discovery

To Serve This Present Age: Social Justice Ministries in the Black Church

Imagine Heaven: Near-Death Experiences, God's Promises, and the Exhilarating Future That Awaits You

Liturgy of the Ordinary: Sacred Practices in Everyday Life

They Walked with God: 40 Bible Characters Who Inspire Us

The Unseen Realm: Recovering the Supernatural Worldview of the Bible

The Genesis 6 Conspiracy: How Secret Societies and the Descendants of Giants Plan to Enslave Humankind

Everything a Man Should Be: 8 Things My Father Showed Me That Produced a Blessed Life

The Last Week: What the Gospels Really Teach about Jesus's Final Days in Jerusalem

The Godly Man's Picture: Drawn with a Scripture Pencil

Five Proofs of the Existence of God