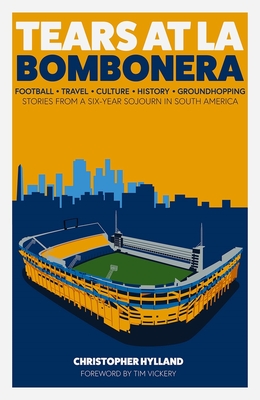 Tears at La Bombonera: Stories from a Six-Year Sojourn in South America

Tears at La Bombonera recounts Christopher Hylland's six-year love affair with Argentina and South America and, more importantly, her football. Buenos Aires has to be the greatest footballing city on the planet. Not only are there dozens of football teams and football grounds in the so-called city of fury, the locals live football unlike any other citizen in the world. After more than three years of living in Buenos Aires (and a Brazilian World Cup), Hylland's footballing odyssey continued by land to Medellín in Colombia. All along the 3,000-mile journey, the beautiful game served as a social lubricant through which friendships were made, stories were shared and the football experienced first hand. Iconic stadiums, provincial grounds and a floodlight failure at a near-empty stadium in the Amazon jungle, every stop along the way provides a story and insight to the sport on a continent whose main preoccupation is football. Throughout the book, the matchday experience is described along with the historical or current context in which the games are played. Each club's unique identity is flavored by the stories and legends told to the author on the terraces or in the pub before and after a game. The book is an excellent introduction to South America culturally and historically and, moreover, her football and some of the most important clubs on the continent.