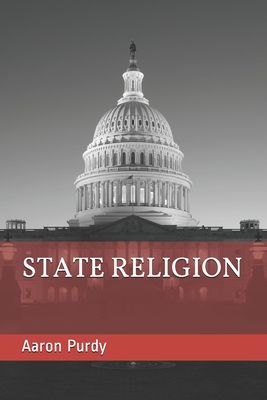 The First Amendment of the United States Constitution provides its citizens with freedom of religion, speech, and association. However, there has been a steady waning of these liberties which began more than a century ago and the trend is quickly accelerating today. Primarily through judicial fiat, freedom of religion is giving way to a state mandated religion. That religion and its precepts are infiltrating our schools, universities, governments, private business practices, and even our churches. By extension, its mandate is engendering limitations on free speech and free association. Non-conformance is punishable by fines, lawsuits, imprisonment, social media censorship, outrage mobs, and threats of violence. Its teachings are mandated in our public schools. Its effects are to remove objectivity and morality and replace them with subjective, might-makes-right rules of law that shift over time in order to maximize its parishioners' power.State Religion uncovers this religion for what it is, describes how it has grown to prominence in the United States, elucidates the logical consequences of its full-fledged inculcation into our society, and provides a compelling alternative to the current trajectory. This book challenges personal preconceptions about the religion and demonstrates the danger within it. It also examines the current state of our society and how it relates to belief and religion. In cutting against the flow of societal momentum, it also stands to enrage adherents of the religion who have become accustomed to uncritical adoption of their tenets.The ramifications of this religion's beliefs are significant. There is ample precedence for its adoption as several nations, past and present, have already traveled down its path. These nations have experienced fiscal calamity and murderous atrocity against their citizens. How will you react? Denial, anger, calls for censorship? Alternatively, will you contemplate the book with intellectual curiosity and test the claims against the evidence?

Of Arcs and Circles: Insights from Japan on Gardens, Nature, and Art

Ur Special: Advice for Humans from Coolman Coffeedan

A New Model: Pondering the Reality of God

The Stage of Time: Secrets of the Past, The Nature of Reality, and the Ancient Gods of History

Return of the Avatars: The Cosmic Architect Tools of Our Future Becoming

You Are Gods: On Nature and Supernature

Congratulations, by the Way: Some Thoughts on Kindness

The Poetics of Space

The Philosophy of Social Ecology: Essays on Dialectical Naturalism

When the House Burns Down: From the Dialect of Thought

Cosmos and Psyche: Intimations of a New World View

The One Thing Is Three: How the Most Holy Trinity Explains Everything