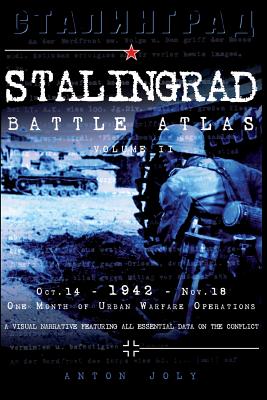 The New 2017 Revised Edition has been awarded the APMC Cultural Price at the Salon de l'Histoire in Paris. We realized that the decisive battle had come and if we can survive it the Germans were unlikely to muster such powerful forces again.
Thus wrote Lieutenant-General Vasily Chuikov, 62nd Army's Commander, about 14 October 1942. As hundreds of tons of steel where hurled against the Soviet defenders, the Germans unleashed a critical onslaught in what they perceived as their D-day for Stalingrad. This same day Hitler issued the winter standby directive to his troops on the eastern front. It read: This year's summer and fall campaign, excepting the operations currently under way and several local offensives still contemplated, has been concluded. As for the operations currently under way 6th Army was ordered not only to continue, but also to strengthen its offensive. Although badly depleted for the most part, the divisions mustered by both sides in the industrial district of the city still embodied a considerable fighting potential. With regard to density, seldom in the history of wars such a small territory was contested by such a quantity of manpower, artillery and aircraft. After the equivalent of a full month of fighting within the city, the culminating point was about to be reached. Towards mid- October, after having reorganized of his attacking forces, General Paulus moved the most able formations into line, expecting the entire front to collapse in the northern sector of Stalingrad, then to finish off 62nd Army's truncated remnants with an enveloping maneuver along the Volga, as was his intent from the beginning. The second volume of the Stalingrad Battle Atlas book series covers another 35 days of fighting inside the city. It relies upon hundreds of wartime reports and recently released archival documents translated by the author. The main sources consist in German 6th Army and Soviet 62nd Army War Diaries, along with data on their units, corps, divisions and regiments. Based on the precise information these documents provide, this volume features specifically designed maps with unit positions for each day of active operations. Synthesizing an extremely wide range of documents and information sources, this chronological atlas seeks to reach the maximal degree of precision in describing historical reality, rendering it through a standardized set of instruments: timeline, orders of battle, unit strength returns, tactical and strategic situation maps, contextual photos, quotes from key actors. It can be used as a reference manual for searchers, as well as a guide for those who want to know the basics: Who, When, Where. In 2015 the Russian Federal Archive Agency, in cooperation with the Ministry of Defense, the Russian Historical Society and the German Historical Institute in Moscow publicly released large archival funds of Soviet and German records. This new edition of the Stalingrad Battle Atlas series thus benefits from the most substantial set of available wartime documents. Main features: o Latest available documents from archives
o Tactical & Strategic Maps
o Order of Battle & Strength Returns 606 pages A new perspective of the legendary battle on the Volga

Everybody Knows a Salesman Can't Write a Book

Personality and Power: Builders and Destroyers of Modern Europe

The Lighthouse of Stalingrad: The Hidden Truth at the Heart of the Greatest Battle of World War II

Hitler in Los Angeles: How Jews Foiled Nazi Plots Against Hollywood and America

The Origins of Surface-To-Air Guided Missile Technology: German Flak Rockets and the Onset of the Cold War

Wings of War: The World War II Fighter Plane That Saved the Allies and the Believers Who Made It Fly

And If I Perish: Frontline U.S. Army Nurses in World War II

Rogue Heroes: The History of the Sas, Britain's Secret Special Forces Unit That Sabotaged the Nazis and Changed the Nature of War

White Knights in the Black Orchestra: The Extraordinary Story of the Germans Who Resisted Hitler

The General and the Genius

The Origins of Surface-To-Air Guided Missile Technology: German Flak Rockets and the Onset of the Cold War

The Lost Paratroopers of Normandy: A Story of Resistance, Courage, and Solidarity in a French Village

Naa P-51 Mustang: The Cadillac of the Skies

The Raft: Three Men, 34 Days, and a Thousand Miles Adrift

War by Other Means: The Pacifists of the Greatest Generation Who Revolutionized Resistance

Everybody Knows a Salesman Can't Write a Book

Dünkirchen 1940: The German View of Dunkirk

The Long Walk: The True Story Of A Trek To Freedom

The Longest Winter: The Battle of the Bulge and the Epic Story of World War II's Most Decorated Platoon