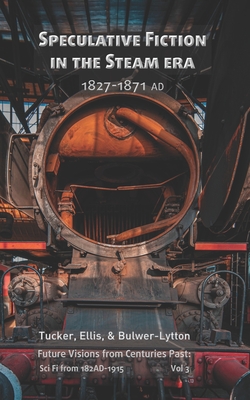 Speculative Fiction In The Steam Era 1827-1871AD (illustrated): C19th American proto sci fi: A Voyage To The Moon, The Steam Man of the Prairies & Vri

Illustrated with pulp magazine covers by James Allen St John, the artist who defined the era of pulp magazines.The mid nineteenth century brought us many cultural touchstones that still inform the stories of today. In particular, many aspects of Americana were defined in the era that became known as the Wild West. Contained herein are stories of steam and technology, with a classically American flair.A Voyage To The Moon, George Tucker, 1827. Considered to be first American SF writer, this tale is the first book to consider the mechanics of space travel in scientific detail.The Huge Hunter Or, the Steam Man of the Prairies, Edward S. Ellis, 1868. The first Science Fiction dime novel, and one of the first examples of the Edisonade genre, this book contains the first mechanical man in fiction, powered by steam. While this book has historical value, it also contains language that was normal at the time but is strongly racist in its depictions of Native Americans.Vril, The Power of the Coming Race, Edward Bulwer-Lyon, 1871. This book has been taken to be based on occult truth, and has been a favourite of spiritualists and psychics for 150 years. It concerns a society of telepathic entities that use a mysterious substance called Vril to gain magical powers of creation and destruction. In a letter to his friend John Forster, Bulwer-Lytton explained his motives: I did not mean Vril for mesmerism, but for electricity, developed into uses as yet only dimly guessed... which I hold to be a mere branch current of the one great fluid pervading all nature... Now, as some bodies are charged with electricity like the torpedo or electric eel, and never can communicate that power to other bodies, so I suppose the existence of a race charged with that electricity and having acquired the art to concentrate and direct it in a word, to be conductors of its lightnings.

The Brothers Karamazov: A Novel in Four Parts and an Epilogue