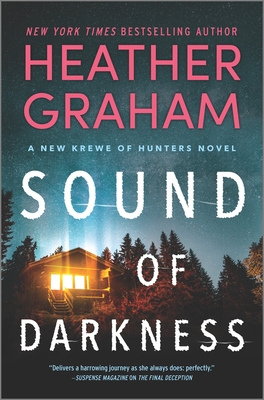 The cries of the dead are deafening Women are being taken in Virginia, and FBI agent Mark Gallagher is determined to put a stop to it. Certain he's closing in on the killer known as The Embracer, Mark is less than thrilled when he's partnered with rookie agent Colleen Law, worried she's a liability when there's so much at stake. But like everyone in the Krewe of Hunters, Colleen has talents that extend beyond the usual investigative toolbox. She can hear the voices of the victims in her head, and they're telling her she and Mark are near to uncovering the truth. When Mark's prime suspect takes a liking to Colleen, he's surprisingly protective of his new partner, even as he admits her connection to the victims is key. But tense interrogations turn dangerously personal when someone close to Colleen goes missing, luring the agents deep into the shadows of wooded rural Virginia, where nobody can hear them scream. A high-octane page turner that's two parts thrills, one part cautionary tale, and an absolute blast to read. --Providence Journal on Danger in Numbers Krewe of Hunters Book 1: Phantom Evil
Book 2: Heart of Evil
Book 3: Sacred Evil
Book 4: The Evil Inside
Book 5: The Unseen
Book 6: The Unholy
Book 7: The Unspoken
Book 8: The Uninvited
Book 9: THE NIGHT IS WATCHING
Book 10: The Night Is Alive
Book 11: THE NIGHT IS FOREVER
Book 12: The Cursed
Book 13: The Hexed
Book 14: The Betrayed
Book 15: The Silenced
Book 16: The Forgotten
Book 17: The Hidden
Book 18: Haunted Destiny
Book 19: Deadly Fate
Book 20: Darkest Journey
Book 21: Dying Breath
Book 22: Dark Rites
Book 23: Wicked Deeds
Book 24: Fade to Black
Book 25: Pale as Death
Book 26: Echoes of Evil
Book 27: The Summoning
Book 28: The Seekers
Book 29: The Stalking
Book 30: Seeing Darkness
Book 31: Deadly Touch
Book 32: Dreaming Death
Book 33: The Unforgiven
Book 34: The Forbidden
Book 35: The Unknown
Book 36: Sound of Darkness
Book 37: Aura of Night
Book 38: Voice of Fear

Down in New Orleans

Nothing Good Happens After Midnight: A Suspense Magazine Anthology

The Dead Heat of Summer: A Krewe of Hunters Novella

Hallow Be the Haunt: A Krewe of Hunters Novella

When Irish Eyes Are Haunting: A Krewe of Hunters Novella

Blood on the Bayou: A Cafferty & Quinn Novella

All Hallows Eve: A Krewe of Hunters Novella

Haunted Be the Holidays: A Krewe of Hunters Novella

The Dead Heat of Summer: A Krewe of Hunters Novella

Descend to Darkness: A Krewe of Hunters Novella

A Matter of Circumstance & the New Deputy in Town

Never Fear - The Apocalypse: The End Is Near

Nothing Good Happens After Midnight: A Suspense Magazine Anthology

Hallow Be the Haunt: A Krewe of Hunters Novella

Emotions, Art, and Christianity in the Transatlantic World, 1450-1800

Out of the Darkness & Marching Orders Lib/E

The Trouble with Andrew

Descend to Darkness: A Krewe of Hunters Novella

The Good Girl's Guide to Rakes

It Starts with Us: A Novelvolume 2