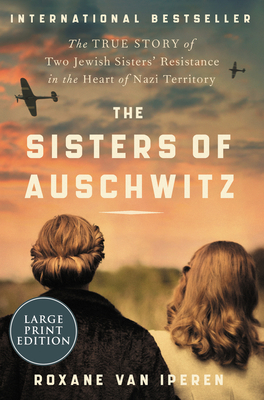 The unforgettable story of two unsung heroes of World War II: sisters Janny and Lien Brilleslijper who joined the Dutch Resistance, helped save dozen of lives, were captured by the Nazis, and ultimately survived the Holocaust.

Eight months after Germany's invasion of Poland, the Nazis roll into The Netherlands, expanding their reign of brutality to the Dutch. But by the Winter of 1943, resistance is growing. Among those fighting their brutal Nazi occupiers are two Jewish sisters, Janny and Lien Brilleslijper from Amsterdam. Risking arrest and death, the sisters help save others, sheltering them in a clandestine safehouse in the woods, they called The High Nest.

This secret refuge would become one of the most important Jewish safehouses in the country, serving as a hiding place and underground center for resistance partisans as well as artists condemned by Hitler. From The High Nest, an underground web of artists arises, giving hope and light to those living in terror in Holland as they begin to restore the dazzling pre-war life of Amsterdam and The Hague.

When the house and its occupants are eventually betrayed, the most terrifying time of the sisters' lives begins. As Allied troops close in, the Brilleslijper family are rushed onto the last train to Auschwitz, along with Anne Frank and her family. The journey will bring Janny and Lien close to Anne and her older sister Margot. The days ahead will test the sisters beyond human imagination as they are stripped of everything but their courage, their resilience, and their love for each other.

Based on meticulous research and unprecedented access to the Brilleslijpers' personal archives of memoirs and photos, Sisters of Auschwitz is a long-overdue homage to two young women's heroism and moral bravery--and a reminder of the power each of us has to change the world.

Facing the Lion: Memoirs of a Young Girl in Nazi Europe

When I Grow Up: The Lost Autobiographies of Six Yiddish Teenagers

I've Been Here Before: When Souls of the Holocaust Return

Eichmann in Jerusalem: A Report on the Banality of Evil

Plunder: A Memoir of Family Property and Nazi Treasure

From Auschwitz with Love: The Inspiring Memoir of Two Sisters' Survival, Devotion and Triumph as told by Manci Grunberger Beran & Ruth Grunberge

The Gallery of Miracles and Madness: Insanity, Modernism, and Hitler's War on Art

The Ravine: A Family, a Photograph, a Holocaust Massacre Revealed

My Name Is Selma: The Remarkable Memoir of a Jewish Resistance Fighter and Ravensbrück Survivor

From Auschwitz with Love: The Inspiring Memoir of Two Sisters' Survival, Devotion and Triumph as told by Manci Grunberger Beran & Ruth Grunberge

The Ratline: The Exalted Life and Mysterious Death of a Nazi Fugitive

The Boy Who Drew Auschwitz: A Powerful True Story of Hope and Survival

The Nazis Knew My Name: A Remarkable Story of Survival and Courage in Auschwitz

Always Remember Your Name: A True Story of Family and Survival in Auschwitz

Forgiveness: The Story of Eva Kor, Survivor of the Auschwitz Twin Experiments

Mitka's Secret: A True Story of Child Slavery and Surviving the Holocaust

East West Street: On the Origins of Genocide and Crimes Against Humanity

When Time Stopped: A Memoir of My Father's War and What Remains

The Shortest History of Germany: From Julius Caesar to Angela Merkel--A Retelling for Our Times

Remnants of Auschwitz: The Witness and the Archive

The Boy Who Followed His Father Into Auschwitz: A True Story of Family and Survival

The Drowned and the Saved

The Zookeeper's Wife: A War Story

Three Minutes in Poland: Discovering a Lost World in a 1938 Family Film

The Just: How Six Unlikely Heroes Saved Thousands of Jews from the Holocaust

Doctors from Hell: The Horrific Account of Nazi Experiments on Humans

The Art of Resistance: My Four Years in the French Underground: A Memoir

The Inextinguishable Symphony: A True Story of Music and Love in Nazi Germany

Why?: Explaining the Holocaust

Five Chimneys: The Story of Auschwitz

A Train Near Magdeburg: A Teacher's Journey into the Holocaust, and the reuniting of the survivors and liberators, 70 years on

The Unanswered Letter: One Holocaust Family's Desperate Plea for Help

The Shoemaker's Son: The Life of a Holocaust Resister

You Can Free Yourself from the Karma of Chaos

Into That Darkness: An Examination of Conscience

I Want You to Know We're Still Here: A Post-Holocaust Memoir

A Promise of Sweet Tea

What They Didn't Burn: Uncovering My Father's Holocaust Secrets

Shmuel's Bridge: Following the Tracks to Auschwitz with My Survivor Father

A Train Near Magdeburg: A Teacher's Journey into the Holocaust, and the reuniting of the survivors and liberators, 70 years on

Americans and the Holocaust: A Reader

The Nazi's Granddaughter: How I Discovered My Grandfather Was a War Criminal

My Grandfather Would Have Shot Me: A Black Woman Discovers Her Family's Nazi Past

The Fatherland and the Jews: Two Pamphlets by Alfred Wiener, 1919 and 1924

The Hitler Haggadah: A Moroccan Jew's Wartime Retelling of the Passover Story

The Tragedy of Patton a Soldier's Date with Destiny: Could World War II's Greatest General Have Stopped the Cold War?

Two Pieces of Cloth: One Family's Story of the Holocaust

House of Glass: The Story and Secrets of a Twentieth-Century Jewish Family

The Third Reich in Power

I Was a Doctor in Auschwitz

Remetz: Resistance Fighter and Survivor of the Warsaw Ghetto

By Chance Alone: A Remarkable True Story of Courage and Survival at Auschwitz

999: The Extraordinary Young Women of the First Official Jewish Transport to Auschwitz

Sounds from Silence: Reflections of a Child Holocaust Survivor, Psychiatrist and Teacher

Auschwitz: The untold story of all the events that took place at the concentration camp and other holocaust survival stories

Ravensbruck: Life and Death in Hitler's Concentration Camp for Women

Wannsee: The Road to the Final Solution

Summary and Analysis of Man's Search for Meaning: Based on the Book by Victor E. Frankl

Auschwitz: Not Long Ago. Not Far Away.

Debating the Holocaust: A New Look at Both Sides

Castles in the Sky

Black Earth: The Holocaust as History and Warning

The Destruction of the European Jews: 1961 First Edition Facsimile

Survivors: Children's Lives After the Holocaust

Notes from the Warsaw Ghetto

The Volunteer: The True Story of the Resistance Hero Who Infiltrated Auschwitz

The Shoemaker's Son: The Life of a Holocaust Resister

Soviet Judgment at Nuremberg: A New History of the International Military Tribunal After World War II

Lilia: a true story of love, courage, and survival in the shadow of war.

If Anyone Calls, Tell Them I Died: A Memoir

Violins of Hope: Violins of the Holocaust--Instruments of Hope and Liberation in Mankind's Darkest Hour

The Upstander: How Surviving the Holocaust Sparked Max Glauben's Mission to Dismantle Hate

One Girl in Auschwitz

A Spy at the Heart of the Third Reich: The Extraordinary Story of Fritz Kolbe, America's Most Important Spy in World War II

The Zookeeper's Wife: A War Story

Prisoners of Memory: A Jewish Family from Nazi Germany

War and Genocide: A Concise History of the Holocaust

Citizen 865: The Hunt for Hitler's Hidden Soldiers in America

Los Niños de Irena / Irena's Children: The Extraordinary Story of the Woman Who Saved 2.500 Children from the Warsaw Ghetto

The Bielski Brothers: The True Story of Three Men Who Defied the Nazis, Built a Village in the Forest, and Saved 1,200 Jews

Forgotten Crimes: The Holocaust and People with Disabilities

Josef Mengele The Angel Of Death: The Horrific Story Of The Evil Nazis Doctor Who Carried Out The Experiment Of The Twins Of Auschwitz

The Hoax of the Twentieth Century: The Case Against the Presumed Extermination of European Jewry

Kaddish: Before the Holocaust and After

Father Forgive Them The Four Laws Of Forgiveness: Memories of Survival during WWII in Nazi Germany

Keepers of Memory: The Holocaust and Transgenerational Identity

The World Must Know: The History of the Holocaust as Told in the United States Holocaust Memorial Museum

Five Chimneys: The Story of Auschwitz

A Noble Treason: The Story of Sophie Scholl and the White Rose Revolt Against Hitler

Inside the Gas Chambers: Eight Months in the Sonderkommando of Auschwitz

Something Beautiful Happened: A Story of Survival and Courage in the Face of Evil

The Fugu Plan: The Untold Story of the Japanese and the Jews During World War II

Survivors: Children's Lives After the Holocaust

Landscapes of the Metropolis of Death: Reflections on Memory and Imagination

I Am the Storm: My Odyssey from the Holocaust to the Frontiers of Medicine

All But My Life

The Pink Triangle: The Nazi War Against Homosexuals

Masters of Death: The SS-Einsatzgruppen and the Invention of the Holocaust

In Our Hearts We Were Giants: The Remarkable Story of the Lilliput Troupe-A Dwarf Family's Survival of the Holocaust

The Holocaust: An Introduction: Exploring the Evidence

Maybe You Will Survive: A Holocaust Memoir

Zvi: The Miraculous Story of Triumph Over the Holocaust

The Ravine: A Family, a Photograph, a Holocaust Massacre Revealed

The Pharmacist of Auschwitz: The Untold Story

The Janowska Road: Survival in a Nazi Death Camp

Anne Frank Remembered: The Story of the Woman Who Helped to Hide the Frank Family

Sounds from Silence: Reflections of a Child Holocaust Survivor, Psychiatrist, and Teacher

When Time Stopped: A Memoir of My Father's War and What Remains

History on Trial: My Day in Court with a Holocaust Denier

The Lost: The Search for Six of Six Million