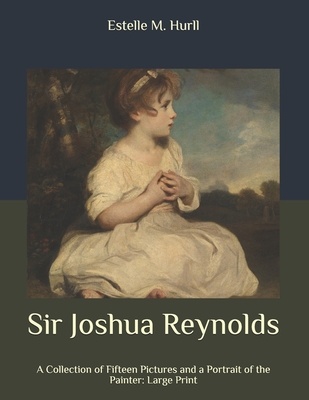 Sir Joshua Reynolds: A Collection of Fifteen Pictures and a Portrait of the Painter: Large Print

Somewhat over a century ago, at the time when our American colonies were struggling for liberty, lived the great English portrait painter, Sir Joshua Reynolds. In those days photography had not been invented, and portrait painting was a profession patronized by all classes of people. There were many portrait studios in London, but none were so fashionable as that of Reynolds.It is said that in his long life he painted as many as three thousand portraits. There was scarcely a distinguished man or beautiful woman in the kingdom who did not sit to him, and many were the children whose portraits he painted. If all his works could be brought together they would form a complete historical gallery of the reign of George III. Here we should see princes, statesmen, and warriors, actors and poets, court beauties and blue stockings, the petted children of the rich, and the picturesque waifs of the London streets. Among the faces we should find those, like Fox and Burke, whose lives were intimately connected with the destinies of our own nation, and those, like Goldsmith and Johnson, whose names are familiar in our schools and homes. There is something about these portraits which makes them seem alive, something too which gives to the plainest person a certain dignity and interest.With all the variety of subjects which Reynolds treated he was never happier than when painting children. He loved them dearly, delighted to play with them, and seemed to understand them as few grown people do. In his great octagonal painting room were many things to amuse his little friends, and a portrait sitting there usually meant a frolic.Penelope Boothby is the name of the little girl in our illustration, and the old-fashioned name is precisely suited to the quaint figure in cap and mitts. We are reminded of that Penelope of the old Greek poem, the Odyssey, who waited so faithfully through the years for the return of her husband Odysseus from the Trojan war. The story runs that, believing Odysseus to be dead, many suitors begged her hand, but she always replied that before marrying she must first complete the shroud she was making for her aged father-in-law. Every day she busied herself with the task, but when night came she secretly undid all that she had wrought through the day, so that it might never reach completion. Thus she prolonged the time of waiting until at last Odysseus returned to claim his wife.Whether or not the little Penelope of our picture knew this story we cannot say, but it was the fashion of the times to revive the names and legends of mythology, and Penelope was a name which had come to stand for all the domestic virtues.

Sir Joshua Reynolds: A Collection of Fifteen Pictures and a Portrait of the Painter

Sir Joshua Reynolds: A Collection Of Fifteen Pictures And A Portrait Of The Painter With Introduction And Interpretation

Sir Joshua Reynolds: A Collection of Fifteen Pictures and a Portrait of the Painter with Introduction and Interpretation (Large Print Editi

Color and Light, 2: A Guide for the Realist Painter

Imaginative Realism, 1: How to Paint What Doesn't Exist

The Art of Heikala: Works and Thoughts

Wonder Walls: How to Transform Your Space with Colorful Geometrics, Graphic Lettering, and Other Fabulous Paint Techniques

The Art of Ponyo

The Official Bob Ross Coloring Book: The Colors of the Four Seasons

Painting in Acrylics: The Indispensable Guide

Painting in Watercolor: The Indispensable Guide

Polaris: The Art of Meyoco

Watercolor with Me in the Ocean

The Joy of Botanical Drawing: A Step-By-Step Guide to Drawing and Painting Flowers, Leaves, Fruit, and More

The New Oil Painting: Your Essential Guide to Materials and Safe Practices

The Sign Painting: A Practical Guide to Tools, Materials, and Techniques

Mastering Composition: Techniques and Principles to Dramatically Improve Your Painting [With DVD]

Conversations with the Brush: Wisdom Tales from the Intuitive Painting Heart

No-Fail Watercolor: The Ultimate Beginner's Guide to Painting with Confidence

How to Make Art for Joy's Sake: Free-Spirited Watercolor

A Field Guide to Color: A Watercolor Workbook

How to Draw and Paint Fantasy Architecture

Colour Demystified: A Complete Guide to Mixing and Using Watercolours

Gouache in 4 Easy Steps: A Beginner's Guide to Creating Beautiful Paintings in No Time

Sketching Techniques for Artists: In-Studio and Plein-Air Methods for Drawing and Painting Still Lifes, Landscapes, Architecture, Faces and Figures, a

Watercolor with Me in the Jungle

The Art of Stone Painting: 30 Designs to Spark Your Creativity

Get Started with Gouache: A Colorful Guide to Painting the World Around You

The Joy of Watercolor: 40 Happy Lessons for Painting the World Around You

How to Make a Watercolor Paint Itself: Experimental Techniques for Achieving Realistic Effects

Paint Lab for Kids: 52 Creative Adventures in Painting and Mixed Media for Budding Artists of All Ages

If You Can Cut, You Can Collage: From Paper Scraps to Works of Art

Kew: The Watercolour Flower Painter's A to Z: An Illustrated Directory of Techniques for Painting 50 Popular Flowers

In the Garden of My Dreams: The Art of Nathalie Lété

The Art of Creative Watercolor: Inspiration and Techniques for Imaginative Drawing and Painting

Painting with Bob Ross: Learn to Paint in Oil Step by Step!

Learning by Heart: Teachings to Free the Creative Spirit

Watercolor Wherever You Are: Flowers

Bob Ross: The Joy of Painting

Watercolor for Beginners: A Fun and Comprehensive Guide to Watercolor Painting Using a Simple Set of Supplies

Watercolor Techniques for Artists and Illustrators: Learn How to Paint Landscapes, People, Still Lifes, and More.

The Painted Art Journal: 24 Projects for Creating Your Visual Narrative

How to Paint Landscapes Quickly and Beautifully in Watercolor and Gouache

A Bowl of Olives: On Food and Memory

Time to start your art: Learn to paint with passion

Be a Peaceful Cloud and Other Life Lessons from Bob Ross

Watercolor Is for Everyone: Simple Lessons to Make Your Creative Practice a Daily Habit - 3 Simple Tools, 21 Lessons, Infinite Creative Possibilit

All the Beauty Still Left: A Poet's Painted Book of Hours

Best of the Joy of Painting

Paint This Book!: Watercolor for the Artistically Undiscovered

The Beginner's Guide to Watercolor: Master Essential Skills and Techniques Through Guided Exercises and Projects

Oh My Gouache!: The Beginner's Guide to Painting with Opaque Watercolour

Watercolor Botanicals: Learn to Paint Your Favorite Plants and Florals

The Chinese Brush Painting Bible: Over 200 Motifs with Step by Step Illustrated Instructions

Watercolor for Relaxation: 25 Meditative Projects to Help You Unwind

Acrylics for the Absolute Beginner

Painting Light and Shadow in Watercolor

Read This If You Want to Be Great at Painting

Urban Watercolor Sketching: A Guide to Drawing, Painting, and Storytelling in Color

The Compendium of Fantasy Art Techniques: The Step-By-Step Guide to Creating Fantasy Worlds, Mystical Characters, and the Creatures of Your Own Worst

The Shadow Drawing: How Science Taught Leonardo How to Paint

Learn to Paint in Acrylics with 50 Small Paintings: Pick Up the Skills * Put on the Paint * Hang Up Your Art

Artist's Painting Techniques: Explore Watercolors, Acrylics, and Oils; Discover Your Own Style; Grow as an Art

Grow: The Art of Koyamori

The Materials of the Artist and Their Use in Painting: With Notes on the Techniques of the Old Masters, Revised Edition

The Urban Sketching Handbook Techniques for Beginners: How to Build a Practice for Sketching on Location

A-Z of Flower Portraits: An Illustrated Guide to Painting 40 Beautiful Flowers in Watercolour

Watercolor Basics: Learn to Solve the Most Common Painting Problems

The Urban Sketching Handbook Working with Color: Techniques for Using Watercolor and Color Media on the Go

Abstracts in Acrylic and Ink: A Playful Painting Workshop

Light and Shade in Watercolour

Ralph Steadman: A Life in Ink

How to See Color and Paint It

The Little Book of Rock Painting: More Than 50 Tips and Techniques for Learning to Paint Colorful Designs and Patterns on Rocks and Stones

Breaking the Rules of Watercolour

The Urban Sketching Handbook 101 Sketching Tips: Tricks, Techniques, and Handy Hacks for Sketching on the Go

The Love of Painting: Genealogy of a Success Medium

Acrylic Painting Step by Step: Discover All the Basics and a Range of Special Techniques for Creating Your Own Masterpieces in Acrylic

Color Harmony for Artists: How to Transform Inspiration Into Beautiful Watercolor Palettes and Paintings

The Artist's Handbook of Materials and Techniques: Fifth Edition, Revised and Updated

The Painter's Secret Geometry: A Study of Composition in Art

Painting What (You Want) to See: Forty-Six Lessons, Assignments, and Painting Critiques on Watercolor and Oil