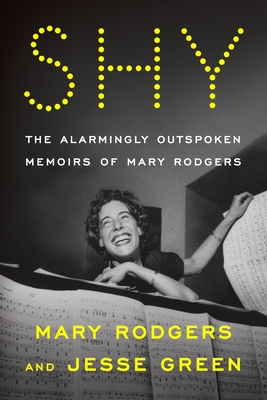 The memoirs of Mary Rodgers--writer, composer, Broadway royalty, and a woman who tried everything.

What am I, bologna? Mary Rodgers (1931-2014) often said. She was referring to being stuck in the middle of a talent sandwich: the daughter of one composer and the mother of another. And not just any composers. Her father was Richard Rodgers, perhaps the greatest American melodist; her son, Adam Guettel, a worthy successor. What that leaves out is Mary herself, also a composer, whose musical Once Upon a Mattress remains one of the rare revivable Broadway hits written by a woman. Shy is the story of how it all happened: how Mary grew from an angry child, constrained by privilege and a parent's overwhelming gift, to become not just a theater figure in her own right but also a renowned author of books for young readers (including the classic Freaky Friday) and, in a final grand turn, a doyenne of philanthropy and the chairman of the Juilliard School. But in telling these stories--with copious annotations, contradictions, and interruptions from Jesse Green, the chief theater critic of The New York Times--Shy also tells another, about a woman liberating herself from disapproving parents and pervasive sexism to find art and romance on her own terms. Whether writing for Judy Holliday or Rin Tin Tin, dating Hal Prince or falling for Stephen Sondheim over a game of chess at thirteen, Rodgers grabbed every chance possible--and then some. Both an eyewitness report from the golden age of American musical theater and a tale of a woman striving for a meaningful life, Shy is, above all, a chance to sit at the feet of the kind of woman they don't make anymore--and never did. They make themselves.

The Only Woman in the Room: Episodes in My Life and Career as a Television Writer

Every Little Win: How Celebrating Small Victories Can Lead to Big Joy

Elbows in My Ears: My Life with Little People, Tigers, and Wardrobe Trunks