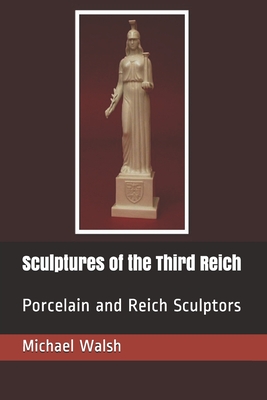 Sculptures of the Third Reich: Porcelain and Reich Sculptors

Porcelain of the Third Reich and its related arts is inspired by and inextricably linked to the popular Michael Walsh series, Sculptures of the Third Reich Volume I and Volume II. Some sculptors, such as Ottmar Obermaier, whose biography is given in Volume I, worked with marble, stone, bronze, and created porcelain figures.Porcelain figurines and artefacts or bric-a-brac present one of the most challenging of the many creative arts. It is difficult if not impossible to challenge the superiority of porcelain collectables designed and produced in the Third Reich (1933 - 1945). The material used is a hard, fine-grained, sonorous, nonporous, and usually translucent and white ceramic ware that consists essentially of kaolin, quartz, and a feldspathic rock and is fired at a high temperature. It falls under three grades: hard-paste porcelain, true porcelain and soft-paste porcelain.The celebrated German porcelain manufacturers were principally to be discovered in Berlin, Meissen and Dresden. The quality of these companies' products conquered the world of elegance and unsurpassed quality of its products since the heyday of the Baroque era, when the German princes founded the first examples of porcelain or ceramic production.The highest quality and beauty of true works of art were produced in Allach. Such was the outstanding quality of the company's products that they came to the attention of the highest and most influential of those involved in the cultural renaissance of National Socialist Germany. The parties interested included the SS (Schutzstaffel). The company was included in the Main Department of Administration and Economics in 1939.The Allach official founding members were: Franz Nagy as a company director, Theodor Kärner as a sculptor, Karl Diebitsch as a painter, and Bruno Galke as a trading agent. They were Germany's most prestigious artists in porcelain. Theodor Kärner also worked at factories Meissen, Rosenthal and Hutschenreuther.Other highly acclaimed artists worked in Allach: Richard Förster, Ottmar Obermaier, Prof. Benno von Arndt, Prof. Wilhelm Krieger, Prof. Willy Zügel, Adolf Röhring, Wilhelm Neuhäuser and others.

Smashing Statues: The Rise and Fall of America's Public Monuments

Struggle: The Art of Szukalski

Alberto Giacometti: Toward the Ultimate Figure

Stories in Stone: A Field Guide to Cemetery Symbolism and Iconography

Mastering Sculpture: The Figure in Clay: A Guide to Capturing the Human Form for Ceramic Artists

The Sculpture of Ruth Asawa, Second Edition: Contours in the Air

Artisans of Trabajo Rústico: The Legacy of Dionicio Rodríguezvolume 19

What Lurks in the Shadows: The Art of Tom Devlin's Monster Museum

Shaping the World: Sculpture from Prehistory to Now

Intimate Geometries: The Art and Life of Louise Bourgeois

The Making of Rodin

Chinati: The Vision of Donald Judd

Ceramic Sculpture: Making Faces: A Guide to Modeling the Head and Face with Clay

Damien Hirst: End of a Century

How to Read Greek Sculpture

George Rickey: A Life in Balance

Breaking the Mould: Sculpture by Women Since 1945

Little People in the City: The Street Art of Slinkachu

Modelling and Sculpting the Human Figure

The Human Factor: The Figure in Contemporary Sculpture

Sculptors Against the State: Anarchism and the Anglo-European Avant-Garde

How to Carve Wood: A Book of Projects and Techniques

Negative Space: Trajectories of Sculpture in the 20th and 21st Centuries

Figure Sculpture in Wax and Plaster

Modelling and Sculpture: A Guide to Traditional Methods

Do Ho Suh: Works on Paper at Stpi

Listening to Stone: The Art and Life of Isamu Noguchi

The Art of Sculpture in Fifteenth-Century Italy

Ruth Asawa: Citizen of the Universe

Greek Sculpture: The Late Classical Period and Sculpture in Colonies and Overseas

Rodin in the United States: Confronting the Modern

Worlds Unbound: The Art of Teamlab

Seattle's Olympic Sculpture Park: A Place for Art, Environment, and an Open Mind

Masters of Shape: The Lives and Art of American Women Sculptors

If Trees Could Talk

Remaking Race and History: The Sculpture of Meta Warrick Fuller

Joseph Beuys: Honey Is Flowing in All Directions

Noisy Autumn: Sculpture and Works on Paper by Christy Rupp

The Art of David Everett: Another Worldvolume 25

The Black Art Renaissance: African Sculpture and Modernism Across Continents

Sculpting the Figure in Clay: An Artistic and Technical Journey to Understanding the Creative and Dynamic Forces in Figurative Sculpture

A Manual of Clay-Modelling (Yesterday's Classics)

The Wyvern Collection: Medieval and Renaissance Enamels and Other Works of Art

Sculptor in Buckskin: The Autobiography of Alexander Phimister Proctor

The Art of Life

The Angel Roofs of East Anglia: Unseen Masterpieces of the Middle Ages

The Thief Who Stole My Heart: The Material Life of Sacred Bronzes from Chola India, 855-1280

Museum of Stones: Ancient and Contemporary Art at the Noguchi Museum

The Materials and Methods of Sculpture

Art of Sculpture Welding: From Concept to Creation

How Writing Came about

The Life of Isamu Noguchi: Journey Without Borders

Out of the Woods: Woodworkers Along the Salish Sea

How to Make Masks! Easy New Way to Make a Mask for Masquerade, Halloween and Dress-Up Fun, with Just Two Layers of Fast-Setting Paper Mache

Francois-Xavier and Claude Lalanne: In the Domain of Dreams

William Spratling, His Life and Art

Liz Larner: Don't Put It Back Like It Was

A History of European and American Sculpture From the Early Christian Period to the Present Day; 2

A Manual of Ancient Sculpture, Egyptian--Assyrian--Greek--Roman: With One Hundred and Sixty Illustrations ...

Gianni Caravaggio: When Nature Was Young

Humanitarians for Justice, Nonviolence and Peace: Journey of an Unexpected Sculptor

Life of Chopin: Frédéric Chopin was a Polish composer and virtuoso pianist of the Romantic era who wrote primarily for solo piano.