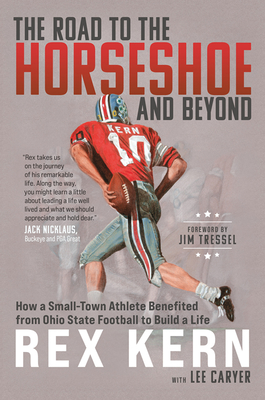 Legendary stories about my dear friend Rex Kern abound. His heroics at Ohio State electrified crowds and inspired reverence from an entire generation of Buckeye fans. I was there as his competitor and teammate, confidante and friend, as well as his occasional partner in mischief. Our brotherhood was forged by a common purpose and an unforgettable championship run. Now Rex tells his story, and I was delighted to learn things about him that I didn't know even after more than fifty years of close friendship. He wrote this as a gift to his sons and grandchildren--to tell in his own words what it was really like--but it is a gift to all of us. From a barbershop in Lancaster to a prayer breakfast at the White House to a College Football Hall of Fame ceremony at the Waldorf Astoria--and to the many doctor's visits and surgeries in between--he walks us through a life always defined by humility, grace, and perseverance. His devotion to family, friendship, and faith in the midst of often debilitating pain is endlessly inspiring. Rex Kern is not just a football legend, he is a champion at everything that matters in life. -- Ron Maciejowski, Super Sub of the Super Sophs, OSU 1968-69-70

All in: An Autobiography (Large Print Edition)

The Only Way Is the Steady Way: Essays on Baseball, Ichiro, and How We Watch the Game

The Twins: A Journey of a Lifetime: Twin brothers' journey through Chicago Sports History and their recollections of a bygone era