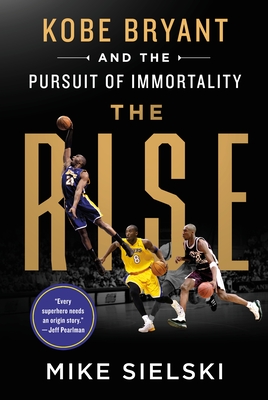 The inside look at one of the most captivating and consequential figures in our culture with never-before-seen material.

Kobe Bryant's death in January 2020 did more than rattle the worlds of sports and celebrity. The tragedy of that helicopter crash unveiled the full breadth and depth of his influence on our culture, and by tracing and telling the oft-forgotten and lesser-known story of his early life, The Rise promises to provide an insight into Kobe that no other analysis has.

In The Rise, readers will travel from the cracked concrete basketball courts of Philadelphia in the 1960s and '70s--where Kobe's father, Joe, became a playground, college, and professional standout--to the Bryant family's isolation in Europe, where Kobe spent his formative years, to the leafy suburbs of Lower Merion, where Kobe's legend was born. The story will trace his career and life at Lower Merion--he led the Aces to the 1995-96 Pennsylvania state championship, a dramatic underdog run for a team with just one star player--and the run-up to the 1996 NBA draft, where Kobe's dream of playing pro basketball culminated with his acquisition by the Los Angeles Lakers. In researching and writing The Rise, Mike Sielski will have a terrific advantage over other writers who have attempted to chronicle Bryant's life. Jeremy Treatman, a Kobe confidant who knew him for 28 years, conducted a series of never-before-released interviews with Bryant not long after his senior season ended. Treatman has shared these transcripts and tapes with the author. They will reveal Bryant's in-the-moment thoughts and tell stories, preserved for a quarter-century, that have never been told before. This will be more than a basketball book. This will be an exploration of the identity and making of an icon and the effect of his development on those around him--the essence of the man before he truly became a man.

All in: An Autobiography (Large Print Edition)

The Only Way Is the Steady Way: Essays on Baseball, Ichiro, and How We Watch the Game

The Twins: A Journey of a Lifetime: Twin brothers' journey through Chicago Sports History and their recollections of a bygone era