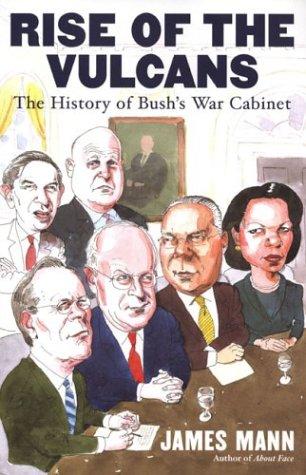 RISE OF THE VULCANS : THE HISTORY OF BUS

When George W. Bush campaigned for the White House, he was such a novice in foreign policy that he couldnat name the president of Pakistan. But he was advised by a group that called themselves the Vulcansaa group of men and one woman with long and shared experience in government, dating back to the Nixon, Ford, Reagan, and first Bush administrations. After returning to power in 2001, the Vulcansaincluding Dick Cheney, Donald Rumsfeld, Colin Powell, Paul Wolfowitz, Richard Armitage, and Condoleeza Riceawere widely expected to restore U.S. foreign policy to what it had been in past Republican administrations. Instead, they put America on an entirely new course, adopting a far-reaching set of ideas and policies that changed the world and Americaas role in it.

In this revelatory and newsworthy volume, James Mann narrates the hidden story of these six history makers, their early careers and rise to power, the interactions and underlying tensions among them, their visions, and their roles in the current administration. Along the way, he offers a wealth of new information (about how Rumsfeld schemed in the Nixon White House, how Cheney toiled as Rumsfeldas doorkeeper, how Wolfowitz first warned of nuclear proliferation in the Middle East in the 1960s) to complete a remarkable look at George W. Bushas inner circle.

Fire and Fury: Inside the Trump White House

Landslide: The Final Days of the Trump Presidency

Zero Fail: The Rise and Fall of the Secret Service

Travels with George: In Search of Washington and His Legacy

Reign of Terror: How the 9/11 Era Destabilized America and Produced Trump

Chaos Under Heaven: Trump, Xi, and the Battle for the Twenty-First Century

The U.S. Constitution and Other Writings

Bag Man: The Wild Crimes, Audacious Cover-Up, and Spectacular Downfall of a Brazen Crook in the White House

The Education of an Idealist: A Memoir

Three Days at Camp David: How a Secret Meeting in 1971 Transformed the Global Economy

Justice on the Brink: The Death of Ruth Bader Ginsburg, the Rise of Amy Coney Barrett, and Twelve Months That Transformed the Supreme Court

63 Documents the Government Doesn't Want You to Read

Corruptible: Who Gets Power and How It Changes Us

The Bidens: Inside the First Family's Fifty-Year Rise to Power

Follow the Money: The Shocking Deep State Connections of the Anti-Trump Cabal

The Enemy Within: How a Totalitarian Movement Is Destroying America

Confronting Radicals: What America Can Learn from Israel

Her Honor: My Life on the Bench...What Works, What's Broken, and How to Change It

How to Win Friends and Influence Enemies: Taking on Liberal Arguments with Logic and Humor

California Plants: A Guide to Our Iconic Flora

In Trump's Shadow: The Battle for 2024 and the Future of the GOP

One Vote Away: How a Single Supreme Court Seat Can Change History

Front Row at the Trump Show

Black, White, Other: Biracial Americans Talk About Race and Identity

A Libertarian Walks Into a Bear: The Utopian Plot to Liberate an American Town (and Some Bears)

Do What You Said You Would Do: Fighting for Freedom in the Swamp

We Were Eight Years in Power: An American Tragedy

The Declaration of Independence and the Constitution of the United States

Trumpty Dumpty Wanted a Crown: Verses for a Despotic Age

The Lemon Tree: An Arab, a Jew, and the Heart of the Middle East

Calm Before The Storm

Joe Biden: The Life, the Run, and What Matters Now

The Big Cheat: How Donald Trump Fleeced America and Enriched Himself and His Family

The Constitution of the United States of America, with the Bill of Rights and All of the Amendments; The Declaration of Independence; And the Articles

Bill of Rights: With Writings That Formed Its Foundation

Faithful Presence: The Promise and the Peril of Faith in the Public Square

Dumpty: The Age of Trump in Verse

A Libertarian Walks Into a Bear: The Utopian Plot to Liberate an American Town (and Some Bears)

None Dare Call It Conspiracy

OMG WTF Does the Constitution Actually Say?: A Non-Boring Guide to How Our Democracy Is Supposed to Work

On That Day: The Definitive Timeline of 9/11

The Privatization of Everything: How the Plunder of Public Goods Transformed America and How We Can Fight Back

What Unites Us: The Graphic Novel

Nixonland: The Rise of a President and the Fracturing of America

Fear: Trump in the White House

Canceling Comedians While the World Burns: A Critique of the Contemporary Left

Dissent: The Radicalization of the Republican Party and Its Capture of the Court

Give Me Liberty, Not Marxism

We the Possibility: Harnessing Public Entrepreneurship to Solve Our Most Urgent Problems

How to Kill a City: Gentrification, Inequality, and the Fight for the Neighborhood

One Nation Under Graham: Apocalyptic Rhetoric and American Exceptionalism

The Bidens: Inside the First Family's Fifty Years of Tragedy, Scandal, and Triumph

Zero Fail: The Rise and Fall of the Secret Service

Front Row at the Trump Show

In the Shadow of the Ivory Tower: How Universities Are Plundering Our Cities

Travels with George: In Search of Washington and His Legacy

A Patriot's History of the United States: From Columbus's Great Discovery to America's Age of Entitlement, Revised Edition

All the President's Men

Decisions and Dissents of Justice Ruth Bader Ginsburg: A Selection

A Plague Upon Our House: My Fight at the Trump White House to Stop Covid from Destroying America

They Never Let a Crisis Go to Waste: The Truth about Disaster Liberalism

Miracle at Philadelphia: The Story of the Constitutional Convention May - September 1787

Great Again: How to Fix Our Crippled America

Inside Trump's White House: The Real Story of His Presidency

Live Free or Die: America (and the World) on the Brink

Walkable City: How Downtown Can Save America, One Step at a Time

The End of America: Letter of Warning to a Young Patriot

2022 the Legacy of Ruth Bader Ginsburg Wall Calendar: Her Words of Hope, Equality and Inspiration--A Yearlong Tribute to the Notorious Rbg

Who is the King in America? And Who are the Counselors to the King?: An Overview of 6,000 Years of History & Why America is Unique

The Constitution of the State of Wyoming

Ruth Bader Ginsburg: In Her Own Words

The Revolt of the Elites and the Betrayal of Democracy

The Agenda: How a Republican Supreme Court Is Reshaping America

Death of the Senate: My Front Row Seat to the Demise of the World's Greatest Deliberative Body

Power Hungry: Women of the Black Panther Party and Freedom Summer and Their Fight to Feed a Movement

Speaking for Myself: Faith, Freedom, and the Fight of Our Lives Inside the Trump White House

Where Law Ends: Inside the Mueller Investigation

To Start a War: How the Bush Administration Took America Into Iraq

Golden Gates: The Housing Crisis and a Reckoning for the American Dream

The Authoritarians: Their Assault on Individual Liberty, the Constitution, and Free Enterprise from the 19th Century to the Present

Disloyal: A Memoir: The True Story of the Former Personal Attorney to President Donald J. Trump

A Generation of Sociopaths: How the Baby Boomers Betrayed America

Democracy in One Book or Less: How It Works, Why It Doesn't, and Why Fixing It Is Easier Than You Think

America's Deadliest Export: Democracy - The Truth about US Foreign Policy and Everything Else

How Ike Led: The Principles Behind Eisenhower's Biggest Decisions

The Complete Book of Us Presidents: Updated for 2021

Don't Know Much About(r) History [30th Anniversary Edition]: Everything You Need to Know about American History But Never Learned

The America We Deserve

Why the Innocent Plead Guilty and the Guilty Go Free: And Other Paradoxes of Our Broken Legal System

Up to Heaven and Down to Hell: Fracking, Freedom, and Community in an American Town

Code of Silence: Sexual Misconduct by Federal Judges, the Secret System That Protects Them, and the Women Who Blew the Whistle

Doesn't Hurt to Ask: Using the Power of Questions to Communicate, Connect, and Persuade

Profiles in Corruption: Abuse of Power by America's Progressive Elite

The Declaration of Independence and the United States Constitution

The Impossible Office?: The History of the British Prime Minister

How to Read the Constitution and the Declaration of Independence

The Spoils of War: Power, Profit and the American War Machine

Democracy in America and Two Essays on America

The Education of an Idealist: A Memoir

Faucian Bargain: The Most Powerful and Dangerous Bureaucrat in American History