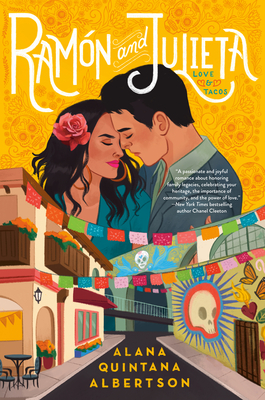 As seen in People en Español! One of NPR's Books We Love A PopSugar and BookBub Most Anticipated Romance of 2022! When fate and tacos bring Ramón and Julieta together on the Day of the Dead, the star-crossed pair must make a choice: accept the bitter food rivalry that drives them apart or surrender to a love that consumes them--perfect for fans of Jane the Virgin! Ramón Montez always achieves his goals. Whether that means collecting Ivy League degrees or growing his father's fast-food empire, nothing sets Ramón off course. So when the sexy señorita who kissed him on the Day of the Dead runs off into the night with his heart, he determines to do whatever it takes to find her again. Celebrity chef Julieta Campos has sacrificed everything to save her sea-to-table taqueria from closing. To her horror, she discovers that her new landlord is none other than the magnetic mariachi she hooked up with on Dia de los Muertos. Even worse, it was his father who stole her mother's taco recipe decades ago. Julieta has no choice but to work with Ramón, the man who destroyed her life's work--and the one man who tempts and inspires her. As San Diego's outraged community protests against the Taco King takeover and the divide between their families grows, Ramón and Julieta struggle to balance the rising tensions. But Ramón knows that true love is priceless and despite all of his successes, this is the one battle he refuses to lose.

Remembrance of Things Past, Volume III: The Captive, the Fugitive & Time Regained

A Box of Matches