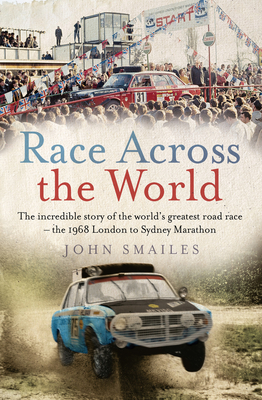 Race Across the World: The Incredible Story of the World's Greatest Road Race - The 1968 London to Sydney Marathon

In 1968, 98 competitors stormed out of London on the world's greatest automotive adventure, the London to Sydney Marathon, the most ambitious and epic car race ever staged. Four weeks later they arrived in Sydney--or, at least, half of them did. The others lay in ruin along its 10,000-mile route. Unimaginable now in either concept or execution, the marathon captured the rapt attention of the countries through which it passed, and of the world, as it created front-page news. It was more than a car race, more than a rally, more than the trials that opened up outback Australia only a decade before: it was the world's most grueling test of driver and vehicle. For Australians, the race became a focal point of the rivalry between local car-manufacturing giants Holden and Ford, as the Monaro Coupe and the iconic Falcon GT went head to head. Neither was to win, but the story of their duel is motor-sporting legend. John Smailes was a young journalist at the time, covering the race for the Sydney Daily Telegraph. Fifty years after this extraordinary race was run, John's dramatic, compelling, and utterly fascinating story-drawing on his own first-hand, eyewitness account and enhanced by in-depth interviews over the intervening years with all the race's key participants-brings the marathon vividly to life.

Formula One: The Pursuit of Speed: A Photographic Celebration of F1's Greatest Moments

100 Cars That Changed the World: The Designs, Engines, and Technologies That Drive Our Imaginations

The Grand Tour Guide to the World

Racecraft: How to beat even your fastest opponents

The Falcon Guide to Van Life: Every Essential for Nomadic Adventures

F1 Heroes: Champions and Legends in the Photos of Motorsport Images

Ferrari Formula 1 Car by Car: Every Race Car Since 1950

The World of Formula One: The Drivers the Races the Cars the Excitement

In the Red: The 2001 Season with Dale Earnhardt Jr.

Drag Racing in the 1960s: The Evolution in Race Car Technology

Leanings: The Best of Peter Egan from Cycle World Magazine

The Road Trip Survival Guide: Tips and Tricks for Planning Routes, Packing Up, and Preparing for Any Unexpected Encounter Along the Way

F1: A History of Formula One Racing

100 Things NASCAR Fans Should Know & Do Before They Die

The Physics of NASCAR: The Science Behind the Speed

The Story of Ferrari: A Tribute to Automotive Excellence

How to Live in a Van and Travel: Live Everywhere, be Free and Have Adventures in a Campervan or Motorhome - Your Home on Wheels

MCN Days, Speedway Nights: A Reporter's Recollection of his Glory Days of Speedway

Driving with the Devil: Southern Moonshine, Detroit Wheels, and the Birth of NASCAR

How to Photograph Cars

Valentino Rossi: All His Races

Wide Open: A Life in Supercross

The Other Side of the Fence: Six Decades of Motorsport Photography

He Crashed Me So I Crashed Him Back: The True Story of the Year the King, Jaws, Earnhardt, and the Rest of NASCAR's Feudin', Fightin' Good Ol' Boys Pu

The Great American Gamble: How the 1979 Daytona 500 Gave Birth to a NASCAR Nation

One Good Run: The Legend of Burt Munro

F1 Mavericks: The Men and Machines That Revolutionized Formula 1 Racing

At the Greatest Speed: Gordon Bennett, the Father of International Motor Racing

Supercar Revolution: The Fastest Cars of All Time

Fast by Design: Great Cars at the Intersection of Speed and Luxury

Beast: The Top Secret Ilmor-Penske Engine That Shocked the Racing World at the Indy 500

Max: The Dutch Master: The Unauthorised Biography of Max Verstappen

Bruce McLaren: From the Cockpit

The Isle of Man TT Course: the definitive guide to the world's most demanding race circuit

The Technique of Motor Racing

To Dakar and Back: 21 Days Across North Africa by Motorcycle

Mind of the Demon: A Memoir of Motocross, Madness, and the Metal Mulisha

The Iroc Porsches: The International Race of Champions, Porsche's 911 Rsr, and the Men Who Raced Them

Ford Gt40 Anthology: A Unique Compilation of Stories about These Most Iconic Cars

Driven: The Men Who Made Formula One

A Different Kind of Life

Racing While Black: How an African-American Stock Car Team Made Its Mark on NASCAR

The Business of Winning: Strategic Success from the Formula One Track to the Boardroom

Racing to the Finish: My Story

Formula One: The Pinnacle: The Pivotal Events That Made F1 the Greatest Motorsport Series

Speed Read F1: The Technology, Rules, History and Concepts Key to the Sportvolume 1

How to Be an F1 Driver

Finding the Groove: Racing Legends Reveal Their Secrets to Speed

Wildest Ride: A History of NASCAR Or, How a Bunch of Good Ol' Boys Built a Billion Dollar Industry Out of Wrecking Cars

Colin Chapman: Inside the Innovator

Williams: A Different Kind of Life

The Art of the Racing Motorcycle: 100 Years of Designing for Speed

The Ford That Beat Ferrari: A Racing History of the Gt40

Alfa Romeo Monza: The Autobiography of the Celebrated 2211130

How to Drive: Real World Instruction and Advice from Hollywood's Top Driver

The Limit: Life and Death on the 1961 Grand Prix Circuit

Awesome Bill from Dawsonville: My Life in NASCAR

My Greatest Defeat: Stories of Hardship and Hope from Motor Racing's Finest Heroes

Aussie Grit: My Formula One Journey

In the Blink of an Eye: Dale, Daytona, and the Day That Changed Everything

How to Ride Off-Road Motorcycles: Key Skills and Advanced Training for All Off-Road, Motocross, and Dual-Sport Riders

Fiat in Motorsport: Since 1899

You Suck at Racing: A crash course for the novice driver

Racing Green: How Motorsport Science Can Save the World

Johnny Rutherford: The Story of an Indy Champ

How to Build a Car Lib/E: The Autobiography of the World's Greatest Formula 1 Designer

The Road to Mastery: The Smart Way to Begin, Continue, or Redirect Your Riding Journey

Motor Racing in the 70's: Pivoting from Romantic to Organized

Lights Out, Full Throttle: The Good the Bad and the Bernie of Formula One

100 Years of the Isle of Man TT: A Century of Motorcycle Racing

Motocross Saved My Life: From Its Darkness

12 Life Lessons From Formula One: From racing to living

Sunday Driver: The Writer Meets the Road -- At 175 MPH