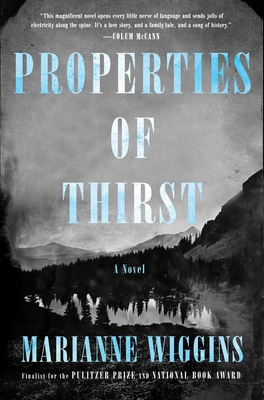 Fifteen years after the publication of Evidence of Things Unseen, National Book Award and Pulitzer Prize finalist Marianne Wiggins returns with a novel destined to be an American classic: a sweeping masterwork set during World War II about the meaning of family and the limitations of the American Dream. Rockwell Rocky Rhodes has spent years fiercely protecting his California ranch from the LA Water Corporation. It is here where he and his beloved wife Lou raised their twins, Sunny and Stryker, and it is here where Rocky has mourned Lou in the years since her death. As Sunny and Stryker reach the cusp of adulthood, the country teeters on the brink of war. Stryker decides to join the fight, deploying to Pearl Harbor not long before the bombs strike. Soon, Rocky and his family find themselves facing yet another incomprehensible tragedy. Rocky is determined to protect his remaining family and the land where they've loved and lost so much. But when the government decides to build a Japanese-American internment camp next to the ranch, Rocky realizes that the land faces even bigger threats than the LA watermen he's battled for years. Complicating matters is the fact that the idealistic Department of the Interior man assigned to build the camp, who only begins to understand the horror of his task after it may be too late, becomes infatuated with Sunny and entangled with the Rhodes family. Properties of Thirst is a novel that is both universal and intimate. It is the story of a changing American landscape and an examination of one of the darkest periods in this country's past, told through the stories of the individual loves and losses that weave together to form the fabric of our shared history. Ultimately, it is an unflinching distillation of our nation's essence--and a celebration of the bonds of love and family that persist against all odds.

Bring Up the Bodies

Our Last Days in Barcelona

Voices in the Evening

The Radiance of the King

The Seven or Eight Deaths of Stella Fortuna

Death Comes for the Archbishop

Eyes of the Rigel

A Tip for the Hangman

The Flight Portfolio: A novel

The Year of the French

The Lost Queen: A Novelvolume 1

A High Wind in Jamaica

Diary of a Foreigner in Paris

Fortunes of War: The Balkan Trilogy

The Pearl That Broke Its Shell

The Pure and the Impure

The Confusion: Volume Two of the Baroque Cycle

A Murder Is Announced: A Miss Marple Mystery

To Love and to Loathe: A Novelvolume 2

I, Claudius: From the Autobiography of Tiberius Claudius, Born 10 B.C., Murdered and Deified A.D. 54

The Corner That Held Them

The Fox in the Attic

A Well-Behaved Woman: A Novel of the Vanderbilts

The Fortune of War

The Power of One

If the Dead Rise Not

A Hero of France