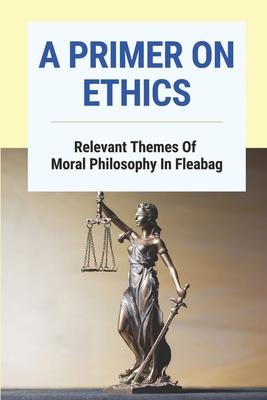 Do you know Fleabag - a television series created and written by Phoebe Waller-Bridge? Are you interested in moral philosophy in Fleabag? Keep reading cause this book is for you.

Fleabag has conquered the heart of audiences all over the world, has received universal critical acclaim, has been presented with many accolades, and has been awarded several prizes.

I see Fleabag as a primer on ethics, a compendium of some relevant themes of moral philosophy. The two-season television series is steeped in relevant questions concerning the identity of a young woman, with particular regard to what is a big part of that identity, namely, her moral integrity. Many themes and concepts in moral philosophy are dealt with in the show by the brilliant writing that characterizes it, not with resonating big words but with admirable levity and grace.

In Fleabag, I detected a peculiar interest in the role of sympathy, but most of all, in the role of the impartial spectator in our coming to terms with moral issues. I see the audience address, adopted extensively in the whole series, as a means to put the impartial spectator on stage.
Fleabag is a series that stimulates what ancient Romans called pietas, the capability not only of understanding human nature and its imperfections but still like humanity regardless of its pitfalls, which is the way to accepting human fallibility and living life with less care to demeaning matters.

If in your opinion Fleabag is a lost soul beyond redemption, you will find the book a challenge to your perspective about her behavior. She is trying to uphold a higher moral standard -in her messy, incoherent way, of course! If instead you position yourself on the opposite end of the moral evaluation spectrum, and in fact, you absolve her of all of her sins, you will find in the book an attempt to articulate the reasons why it is not possible to defend her entirely, while at the same time still liking and caring for her.

One way or the other, if you miss Fleabag as much as I do, you'll find here an occasion to spend some more time with her, while waiting for her glamorous return for a third season, whose release date is expected by the time of the Greek calends, when she will pop up on the screening arm in arm with none other than Godot himself.

The Essential Tao: An Initiation Into the Heart of Taoism Through the Authentic Tao Te Ching and the Inner Teachings of Chuang-Tzu

The Heritage of the Bhikkhu: The Buddhist Tradition of Service

Tracking Bodhidharma: A Journey to the Heart of Chinese Culture

The Art of War: The Denma Translation

The Healing Power of Mind: Simple Meditation Exercises for Health, Well-Being, and Enlightenment

The Yoga of Spiritual Devotion: A Modern Translation of the Narada Bhakti Sutras

The Philosophy of Living

This Strange Idea of the Beautiful

In Praise of the Goddess: The Devimahatmya and Its Meaning

The Importance of Living

Philosophers of the Warring States: A Sourcebook in Chinese Philosophy

The Rebirth of Buddha: My Eternal Disciples, Hear My Words