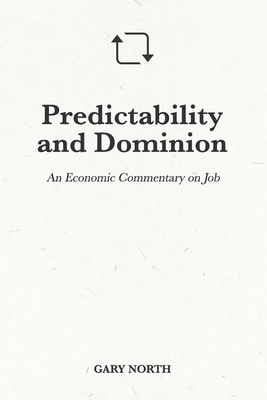 Predictability and Dominion: An Economic Commentary on Job

Series: An Economic Commentary on the Bible, Book 19

The Book of Job is a book about bad things happening to good people. If God's promises are sure, how is it that Job got hammered?

Job begins with a peculiar story. God challenged Satan to consider His servant Job, how righteous he was. Satan, a strict utilitarian, answered along these lines: He's in it for the money. He gets favored. Remove the favors, and he will curse you. To which God said: He's all yours. That was Chapter 1. It happened again in Chapter 2.

Job was beaten down. He had lost everything except a wife who gave him bad advice. He asked the classic question: Why me?

Four comforters came to visit him, and three of them blamed his sin for his troubles. He defended himself because he had done nothing wrong; they said he had. These friends invoked God's predictability. Job responded that God was not predictable in his case.

The fourth comforter, a young man, had it right: Job did not have the right to call God into question. Then God appeared and reinforced what the young man had said. Then Job repented. Then he was blessed.

Problem: his 10 dead children remained dead. How can this be explained?

Here is the economic issue: The Mosaic law says that righteousness produces economic growth. Job was righteous, yet he lost. Is God's law trustworthy? Is God predictable? If he isn't, then how can there be Christian economics?

The main topics covered include: sanctions and predictability, the trustworthiness of the system of sanctions, the justice of God's sanctions, the sovereignty of God, and the response of God to Job's questions.

Revealing Revelation: How God's Plans for the Future Can Change Your Life Now

Strong's Exhaustive Concordance of the Bible

Strong's Exhaustive Concordance of the Bible

Revealing Revelation Workbook: How God's Plans for the Future Can Change Your Life Now

Mysteries of the Messiah: Unveiling Divine Connections from Genesis to Today

100 Prophecies Fulfilled by Jesus: Messianic Prophecies Made Before the Birth of Christ

The Case for Christ: A Journalist's Personal Investigation of the Evidence for Jesus

Easy to Read Bible Summary for Teens and Adults

The Message the Book of Proverbs

The Falling Away: Spiritual Departure or Physical Rapture?: A Second Look at 2 Thessalonians 2:3

Don't Give the Enemy a Seat at Your Table: It's Time to Win the Battle of Your Mind...

My Utmost for His Highest: Updated Language Paperback

The Crucifixion of the King of Glory: The Amazing History and Sublime Mystery of the Passion

The Last Week: What the Gospels Really Teach about Jesus's Final Days in Jerusalem

You Were Made for This Moment: Courage for Today and Hope for Tomorrow

The VISION and Set the Trumpet to Thy Mouth

Don't Give the Enemy a Seat at Your Table Study Guide: It's Time to Win the Battle of Your Mind

The Rise of the Micaiah Prophet: A Call to Purity in Prophetic Ministry

Becoming a Woman Whose God Is Enough

Misquoting Jesus: The Story Behind Who Changed the Bible and Why

When the Man Comes Around: A Commentary on the Book of Revelation

The Unseen Realm: Recovering the Supernatural Worldview of the Bible

The Truth and Beauty: How the Lives and Works of England's Greatest Poets Point the Way to a Deeper Understanding of the Words of Jesus

The Sanctifier: The Classic Work on the Holy Spirit

The Treasury of David

Journey Through the Bible: 365-Day Readings With Daily Devotional

A Harmony of the Gospels: Based on the Broadus Harmony in the Revised Version

Jesus for Everyone: Not Just Christians

It's Not Supposed to Be This Way: Finding Unexpected Strength When Disappointments Leave You Shattered

Q, the Earliest Gospel: An Introduction to the Original Stories and Sayings of Jesus

When Your World Falls Apart: See Past the Pain of the Present

Lent for Everyone: Luke, Year C: A Daily Devotional

The Lost Prophecies of Qumran: 2025 and the Final Age of Man

The Brown-Driver-Briggs Hebrew and English Lexicon

The God who Sings: Set Free by the Sound

The Upper Room Disciplines 2022: A Book of Daily Devotions

The Dawn of Redeeming Grace: Daily Devotions for Advent

Becoming a Woman of Grace

Why I Preach from the Received Text: An Anthology of Essays by Reformed Ministers

A Companion to the Book of Enoch: A Reader's Commentary, Vol I: The Book of the Watchers (1 Enoch 1-36)

The New Complete Works of Josephus

With the Master: Before the Mirror of God's Word

Why Not Full-Preterism?: A Partial-Preterist Response to a Novel Theological Innovation

Becoming a Woman of Purpose

Then and Now Bible Maps Insert

From the Godfather to God the Father: The Michael Francise Story

The Story of Christianity: Volume 1: The Early Church to the Dawn of the Reformation

Dinosaurs of Eden (Revised & Updated): Did Adam and Noah Live with Dinosaurs?

Becoming a Woman of Prayer

The Middle East Meltdown: The Coming Islamic Invasion of Israel

The Walk of Repentance

God's Plan for Man: Contained in Fifty-Two Lessons, One for Each Week of the Year

They Walked with God: 40 Bible Characters Who Inspire Us

The Warning: Testimonies and Prophecies of the Illumination of Conscience

Light that Shines in Darkness

The Gospel of John

The Parables of Jesus Participant's Guide

The Character of a Follower of Jesus

The End of the Age: The Countdown Has Begun

Blessed: Experiencing the Promise of the Book of Revelation

The Mothers and Daughters of the Bible Speak: Lessons on Faith from Nine Biblical Families (Large Print Edition)

All Will Be Well: Receiving The Keys To Strengthen Your Faith

The Miracles of Jesus

A Sacred Sorrow: Reaching Out to God in the Lost Language of Lament

Becoming a Woman of Strength

The History & Development of the Doctrine of the Trinity

God of Freedom - Bible Study Book with Video Access: A Study of Exodus 19-40

What Were You Arguing About Along The Way?: Gospel Reflections for Advent, Christmas, Lent and Easter

Grace: A Bible Study on Ephesians for Women

The Making of the Bible: From the First Fragments to Sacred Scripture

The New Strong's Expanded Exhaustive Concordance of the Bible

You Are Never Alone: Trust in the Miracle of God's Presence and Power

The Bible Recap: A One-Year Guide to Reading and Understanding the Entire Bible

Hand Me Another Brick: Timeless Lessons on Leadership

Joy!: A Bible Study on Philippians for Women

The Book of Signs: 31 Undeniable Prophecies of the Apocalypse

The Book of Signs Study Guide: 31 Undeniable Prophecies of the Apocalypse

Behold the Man! Jesus, Messiah, King.: A Biographical view from a Biblical Perspective!

The Book of Signs: 31 Undeniable Prophecies of the Apocalypse

Ancient Mysteries of the Essenes: The Ken Johnson Collection

Becoming a Woman of Simplicity

Rebuilding Nehemiah: a journey back to wholeness

The Message the Book of Psalms

The Book of All Books

Zeal: A Bible Study on Titus for Woman

Faithful and True: A Study Guide to the Book of Revelation

God's Promises for Every Day

With the Master in Fullness of Joy: A Ladies' Bible Study on the Book of Philippians