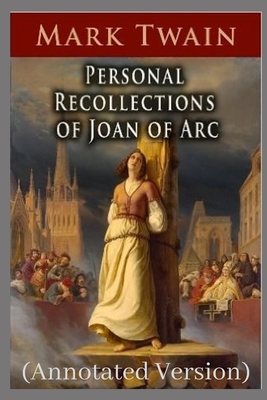 This is the Annotated version of the original book. This is the Summarized Version of the main book. This Summary Version consists of 107000 words which consist of 75% (approximately) of the original book. which can help as a good study guide in understanding this book. This is a very long Fiction and Non-Fiction Element Book.It is Twain's last completed novel, published when he was 61 years old.The novel is presented as a translation by Jean Francois Alden of memoirs by Louis de Conte, a fictionalized version of Joan of Arc's page Louis de Contes. The novel is divided into three sections according to Joan of Arc's development: a youth in Domrémy, a commander of the army of Charles VII of France, and a defendant at trial in Rouen.The novel was first published as a serialization in Harper's Magazine beginning in April 1895. Twain was aware of his reputation as a comic writer and he asked that each installment appear anonymously so that readers would treat it seriously. Regardless, his authorship soon became known, and Harper and Brothers published the book edition with his name in May 1896.Book One begins with the birth of de Conte on January 6, 1410, in Neufchâteau, France, and his parents' subsequent move to Paris. de Conte tells multiple incidents where Joan is shown to be the wisest, bravest, most virtuous child in Domrémy, such as her arguments to the priest on the fairies and her treatment of the wandering soldier and the criminal madman. In Chapter VI and VII, de Conte recounts his seeing Joan converse with a divine entity and her explanation that she has been chosen by God to win back France, and set the crown upon the head of His servant that is Dauphin and shall be King. The king initially grants Joan permission to attack, but just as Joan is on the verge of victory, the king announces a long-term truce with Paris, which indicates a ceasefire. The final chapter relates the events of May 24, 1430, in which Joan and the French lose a battle to the English and Burgundian troops, resulting in Joan's capture. Throughout Book 2, de Conte speaks of Joan's virtue (her ban on prostitution, gambling, and profanity in the army; her requirement that each man attends church; and her mercy toward English prisoners) as well as Joan's divine powers (her recognizing the king without notice, finding a hidden sword in the church, foreseeing war-wounds and her impending death). At the end of Chapter XXI, readers may think that de Conte insinuates Joan d'Arc was raped in prison by the English guards due to the vague wording. It is important, however, to note that at the end of Chapter XXIII, this interpretation is directly gone against by Joan's own statements, relayed by de Conte, during a passionate outburst of indignation and despair by Joan to those dooming her, specifically referring to herself as one who has never been defiled.