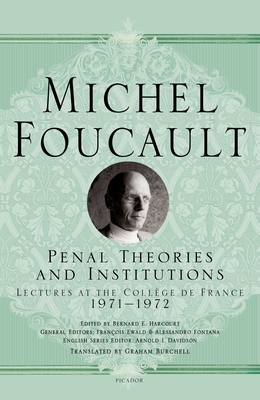 What characterizes the act of justice is not resort to a court and to judges; it is not the intervention of magistrates (even if they had to be simple mediators or arbitrators). What characterizes the juridical act, the process or the procedure in the broad sense, is the regulated development of a dispute. And the intervention of judges, their opinion or decision, is only an episode in this development. What defines the juridical order is the way in which one confronts one another, the way in which one struggles. The rule and the struggle, the rule in the struggle, this is the juridical. --Michel Foucault

The great French philosopher Michel Foucault delivered a series of lectures at the Collège de France from November 1971 to March 1972, entitled Penal Theories and Institutions. Within them, he presented for the first time his approach to the question of power, one that would become the focus of his research up to the writing of Discipline and Punish and beyond. His analysis begins with a detailed account of Richelieu's repression of the Nu-pieds Revolt (1639-1640) and moves on to show how the apparatus of power developed by the monarchy on this occasion broke with the system of juridical and judicial institutions of the Middle Ages, widening into a judicial State apparatus--a repressive system, whose function was focused on the confinement of those who challenged its order. Here, Foucault systematizes his approach to a history of truth which is at the heart of his notion of knowledge-power, based on the study of juridico-political matrices that he had begun in the previous year's Lectures on the Will to Know. Available for the first time in English, these lectures are an essential milestone in the development of Foucault's influential theory of justice and penal law.

A Companion to Antonio Gramsci: Essays on History and Theories of History, Politics and Historiography

Symposium and the Death of Socrates

Science in the Soul: Selected Writings of a Passionate Rationalist

Theogenesis The Foundation Of Hermetic Philosophy