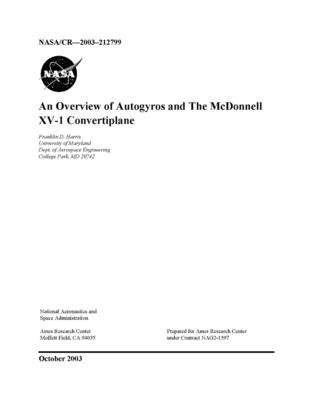 An Overview of Autogyros and The McDonnell XV-1 Convertiplane

This report and its lengthy appendix first reviews early autogyro history. The period from Juan de la Cierva's invention in the early1920s through to the U. S. Army Air Corps' choice, in 1943, of the helicopter instead of the more fully developed autogyro, is examined from a technical point of view. With this historical background in hand, simple aerodynamic technology for rotors, wings, propeller, and fuselages is provided for reference. The McDonnell XV-1 convertiplane development and its program are discussed in detail, with particular emphasis on the wind tunnel and flight testing that was accomplished with two prototype aircraft in the early 1950s. The tip drive rotor system with its ingeniously designed hub was well suited to high speed rotorcraft. The configuration was conceived by Kurt Hohenemser and Fred Dubloff. Many photographs taken of the XV-1 stored at Fort Rucker are included in this report's appendix. Harris, Franklin D. Ames Research Center NASA/CR-2003-212799, A-0310910 NAG2-1597; WU SAT292004D 37895 AUTOGYROS; AERODYNAMICS; FLIGHT TESTS; V/STOL AIRCRAFT; ROTARY WING AIRCRAFT; HELICOPTERS; PROTOTYPES; HISTORIES; INVENTIONS

Astrophysics for People in a Hurry

A Brief History of Time

The End of Everything: (Astrophysically Speaking)

Extraterrestrial: The First Sign of Intelligent Life Beyond Earth

Frequently Asked Questions about the Universe

How to Read Water: Clues and Patterns from Puddles to the Sea

Until the End of Time: Mind, Matter, and Our Search for Meaning in an Evolving Universe

A Brief Welcome to the Universe: A Pocket-Sized Tour

Carrying the Fire: An Astronaut's Journeys

The Zoologist's Guide to the Galaxy: What Animals on Earth Reveal about Aliens--And Ourselves

How to Make an Apple Pie from Scratch: In Search of the Recipe for Our Universe, from the Origins of Atoms to the Big Bang

2022 Guide to the Night Sky: A Month-By-Month Guide to Exploring the Skies Above North America

Fear of a Black Universe: An Outsider's Guide to the Future of Physics

Where Did the Universe Come From? and Other Cosmic Questions: Our Universe, from the Quantum to the Cosmos

The Elegant Universe: Superstrings, Hidden Dimensions, and the Quest for the Ultimate Theory

Galaxies: Birth and Destiny of Our Universe

The End of Everything: (Astrophysically Speaking)

Believing Is Seeing: A Physicist Explains How Science Shattered His Atheism and Revealed the Necessity of Faith

What We See in the Stars: An Illustrated Tour of the Night Sky

Constellation Finder: A Guide to Patterns in the Night Sky with Star Stories from Around the World

50 Things to See with a Small Telescope

Night Sky: A Field Guide to the Constellations [With Card Flashlight]

The Burning Blue: The Untold Story of Christa McAuliffe and NASA's Challenger Disaster

Turn Left at Orion: Hundreds of Night Sky Objects to See in a Home Telescope - And How to Find Them

What's Eating the Universe?: And Other Cosmic Questions

Penetration: The Question of Extraterrestrial and Human Telepathy

How to Read Nature: Awaken Your Senses to the Outdoors You've Never Noticed

Pale Blue Dot: A Vision of the Human Future in Space

Believing Is Seeing: A Physicist Explains How Science Shattered His Atheism and Revealed the Necessity of Faith

Genesis: The Story of How Everything Began

Back to Earth: What Life in Space Taught Me about Our Home Planet--And Our Mission to Protect It

110 Things to See With a Telescope

The Big Picture: On the Origins of Life, Meaning, and the Universe Itself

The Human Cosmos: Civilization and the Stars

You Are the Universe: Discovering Your Cosmic Self and Why It Matters

Death by Black Hole: And Other Cosmic Quandaries

Test Gods: Virgin Galactic and the Making of a Modern Astronaut

Hawking Hawking: The Selling of a Scientific Celebrity

Nightwatch: A Practical Guide to Viewing the Universe

Secret Life of Stars: Astrophysics for Everyone

Beyond: The Astonishing Story of the First Human to Leave Our Planet and Journey Into Space

Brief Answers to the Big Questions

The Last Stargazers: The Enduring Story of Astronomy's Vanishing Explorers

110 Things to See With a Telescope: The World's Most Famous Stargazing List

Space Is Cool as F*ck

The Science of Interstellar

The Natural Navigator, Tenth Anniversary Edition: The Rediscovered Art of Letting Nature Be Your Guide

Biocentrism: How Life and Consciousness Are the Keys to Understanding the True Nature of the Universe

Cosmos and Psyche: Intimations of a New World View

The Greatest Lie on Earth: Proof That Our World Is Not a Moving Globe

The Complete Guide to Absolutely Everything (Abridged): Adventures in Math and Science

The Sirens of Mars: Searching for Life on Another World

The Future of Humanity: Our Destiny in the Universe

The Sky Atlas: The Greatest Maps, Myths, and Discoveries of the Universe

The Night Sky of the Southern Hemisphere

Until the End of Time: Mind, Matter, and Our Search for Meaning in an Evolving Universe

Breaking Boundaries: The Science Behind Our Planet

The Mission: A True Story

Apollo 1: The Tragedy That Put Us on the Moon

The Road to Reality: A Complete Guide to the Laws of the Universe

The Art of NASA: The Illustrations That Sold the Missions

Stars and Planets: The Most Complete Guide to the Stars, Planets, Galaxies, and Solar System - Updated and Expanded Edition

Next Time You See the Moon

50 Things to See in the Sky: (Illustrated Beginner's Guide to Stargazing with Step by Step Instructions and Diagrams, Glow in the Dark Cover)

Light in the Darkness: Black Holes, the Universe, and Us

Passport to Magonia: From Folklore to Flying Saucers

The Fabric of the Cosmos: Space, Time, and the Texture of Reality

Hamlet's Mill: An Essay Investigating the Origins of Human Knowledge and Its Transmissions Through Myth

The Order of Time

UFOs: Generals, Pilots, and Government Officials Go on the Record

My View of the World

What's the Use?: How Mathematics Shapes Everyday Life

The Invisible Universe: Why There's More to Reality Than Meets the Eye

Sunburst and Luminary: An Apollo Memoir

The Stage of Time: Secrets of the Past, The Nature of Reality, and the Ancient Gods of History

Ten Patterns That Explain the Universe

First Light: Switching on Stars at the Dawn of Time

The Illustrated a Brief History of Time: Updated and Expanded Edition

Relativity: The Special and General Theory

Welcome to the Universe: An Astrophysical Tour

100 Things to See in the Night Sky, Expanded Edition: Your Illustrated Guide to the Planets, Satellites, Constellations, and More

The Planets: The Definitive Visual Guide to Our Solar System

The First Three Minutes: A Modern View of the Origin of the Universe

Why Does the World Exist?: An Existential Detective Story

50 Things To See With A Small Telescope

The Human Cosmos: Civilization and the Stars

Astronomy 101: From the Sun and Moon to Wormholes and Warp Drive, Key Theories, Discoveries, and Facts about the Universe

The Smallest Lights in the Universe: A Memoir

How to Astronaut: An Insider's Guide to Leaving Planet Earth

Parallel Worlds: A Journey Through Creation, Higher Dimensions, and the Future of the Cosmos

Back To a Future for Mankind

The Hidden Reality: Parallel Universes and the Deep Laws of the Cosmos

The Seven Sisters of the Pleiades: Stories from Around the World

NASA Skylab Owners' Workshop Manual: 1969 to 1979 (all models) - An insight into the history, design, development and operation of the first US manned space station (Haynes Manuals)

Almagest: Introduction to the Mathematics of the Heavens

Our Mathematical Universe: My Quest for the Ultimate Nature of Reality

The Story of the Universe in 100 Stars

Fire and Ice: The Volcanoes of the Solar System

The Singular Universe and the Reality of Time: A Proposal in Natural Philosophy

The Magic of Astrology: For Health, Home and Happiness

How to Die in Space: A Journey Through Dangerous Astrophysical Phenomena

The Case for Mars: The Plan to Settle the Red Planet and Why We Must

The Lost Art of Finding Our Way

We Have No Idea: A Guide to the Unknown Universe

The Holographic Universe: The Revolutionary Theory of Reality

Bright Galaxies, Dark Matter, and Beyond: The Life of Astronomer Vera Rubin

A Brief History of Time: And Other Essays

Rocket Men: The Daring Odyssey of Apollo 8 and the Astronauts Who Made Man's First Journey to the Moon

The NASA Archives. 60 Years in Space

A Brief Tour of Higher Consciousness: A Cosmic Book on the Mechanics of Creation

The Greatest Adventure: A History of Human Space Exploration

A Universe from Nothing: Why There Is Something Rather Than Nothing

111 Places in Space That You Must Not Miss

50 Things to See with a Small Telescope (Southern Hemisphere Edition)

The Little Book of Cosmology

The Night Sky Month by Month

The Next 500 Years: Engineering Life to Reach New Worlds

The Cambridge Atlas of Herschel Objects

Astronomy for All Ages: Discovering the Universe Through Activities for Children and Adults

300 Problems in Special and General Relativity: With Complete Solutions

To Know a Starry Night

The Elegant Universe: Superstrings, Hidden Dimensions, and the Quest for the Ultimate Theory

Death by Black Hole: And Other Cosmic Quandaries

Mercury in Retrograde: And Other Ways the Stars Can Teach You to Live Your Truth, Find Your Power, and Hear the Call of the Universe

Galileo: And the Science Deniers

A Walk Through the Heavens: A Guide to Stars and Constellations and Their Legends

Startalk: Everything You Ever Need to Know about Space Travel, Sci-Fi, the Human Race, the Universe, and Beyond

Our Universe: An Astronomer's Guide

Endurance: A Year in Space, a Lifetime of Discovery