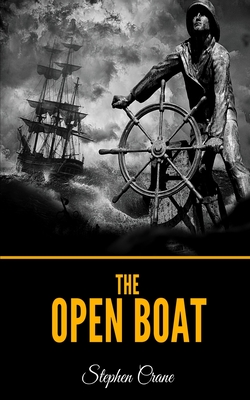 None of them knew the colour of the sky. Their eyes glanced level, and were fastened upon the waves that swept toward them. These waves were of the hue of slate, save for the tops, which were of foaming white, and all of the men knew the colours of the sea. The horizon narrowed and widened, and dipped and rose, and at all times its edge was jagged with waves that seemed thrust up in points like rocks. Many a man ought to have a bath-tub larger than the boat which here rode upon the sea. These waves were most wrongfully and barbarously abrupt and tall, and each froth-top was a problem in small boat navigation. The cook squatted in the bottom and looked with both eyes at the six inches of gunwale which separated him from the ocean. His sleeves were rolled over his fat forearms, and the two flaps of his unbuttoned vest dangled as he bent to bail out the boat. Often he said: Gawd! That was a narrow clip. As he remarked it he invariably gazed eastward over the broken sea. The oiler, steering with one of the two oars in the boat, sometimes raised himself suddenly to keep clear of water that swirled in over the stern. It was a thin little oar and it seemed often ready to snap. The correspondent, pulling at the other oar, watched the waves and wondered why he was there. - Taken from The Open Boat written by Stephen Crane

The Open Boat: And Other Tales of Adventure (1898)

The Open Boat: And Other Tales of Adventure (1898)

The Open Boat: And Other Tales Of Adventure (1898)

The Open Boat: And Other Tales Of Adventure (1898)