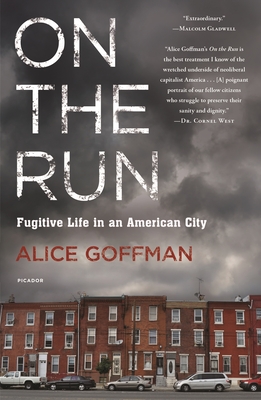 On the Run: Fugitive Life in an American City

A RIVETING, GROUNDBREAKING ACCOUNT OF HOW THE WAR ON CRIME HAS TORN APART INNER-CITY COMMUNITIES

Forty years in, the tough on crime turn in American politics has spurred a prison boom of historic proportions that disproportionately affects Black communities. It has also torn at the lives of those on the outside. As arrest quotas and high tech surveillance criminalize entire blocks, a climate of fear and suspicion pervades daily life, not only for young men entangled in the legal system, but for their family members and working neighbors. Alice Goffman spent six years in one Philadelphia neighborhood, documenting the routine stops, searches, raids, and beatings that young men navigate as they come of age. In the course of her research, she became roommates with Mike and Chuck, two friends trying to make ends meet between low wage jobs and the drug trade. Like many in the neighborhood, Mike and Chuck were caught up in a cycle of court cases, probation sentences, and low level warrants, with no clear way out. We observe their girlfriends and mothers enduring raids and interrogations, clean residents struggling to go to school and work every day as the cops chase down neighbors in the streets, and others eking out a living by providing clean urine, fake documents, and off the books medical care. This fugitive world is the hidden counterpoint to mass incarceration, the grim underside of our nation's social experiment in punishing Black men and their families. While recognizing the drug trade's damage, On The Run reveals a justice system gone awry: it is an exemplary work of scholarship highlighting the failures of the War on Crime, and a compassionate chronicle of the families caught in the midst of it. A remarkable feat of reporting . . . The level of detail in this book and Goffman's ability to understand her subjects' motivations are astonishing--and riveting.--The New York Times Book Review

Call Them by Their True Names: American Crises (and Essays)

Corrections in Ink: A Memoir

The Sewing Girl's Tale: A Story of Crime and Consequences in Revolutionary America

The Gift of Fear: Survival Signals That Protect Us from Violence

The Women's House of Detention: A Queer History of a Forgotten Prison

Deer Creek Drive: A Reckoning of Memory and Murder in the Mississippi Delta

Behave: The Biology of Humans at Our Best and Worst

Change Everything: Racial Capitalism and the Case for Abolition

The Sun Does Shine: How I Found Life, Freedom, and Justice

The Little Book of Restorative Justice

This Is Ear Hustle: Unflinching Stories of Everyday Prison Life

Fumbling Towards Repair: A Workbook for Community Accountability Facilitators

Biased: Uncovering the Hidden Prejudice That Shapes What We See, Think, and Do

Abolition for the People: The Movement for a Future Without Policing & Prisons

Chosen: A Memoir of Stolen Boyhood

America, Goddam: Violence, Black Women, and the Struggle for Justice

I've Got Your Back: The Indispensable Guide to Stopping Harassment When You See It

The Other Side of Prospect: A Story of Violence, Injustice, and the American City

The Familia Grande: A Memoir

We Are Proud Boys: How a Right-Wing Street Gang Ushered in a New Era of American Extremism

Sexual Citizens: A Landmark Study of Sex, Power, and Assault on Campus

The Forever Prisoner: The Full and Searing Account of the Cia's Most Controversial Covert Program

The Tomorrow Game: Rival Teenagers, Their Race for a Gun, and a Community United to Save Them

Sexed Up: How Society Sexualizes Us, and How We Can Fight Back

Stop the Killing: How to End the Mass Shooting Crisis

The Power of Dignity: How Transforming Justice Can Heal Our Communities

The Rage of Innocence: How America Criminalizes Black Youth

Drug Use for Grown-Ups: Chasing Liberty in the Land of Fear

The Land of Open Graves: Living and Dying on the Migrant Trail Volume 36

The Gulag Archipelago [Volume 3]: An Experiment in Literary Investigation

Enlightenment Now: The Case for Reason, Science, Humanism, and Progress

Prison Ramen: Recipes and Stories from Behind Bars

The Power of Women: A Doctor's Journey of Hope and Healing

I Can Take It from Here: A Memoir of Trauma, Prison, and Self-Empowerment

Duped: Why Innocent People Confess - And Why We Believe Their Confessions

Not That Bad: Dispatches from Rape Culture

Punished: Policing the Lives of Black and Latino Boys

The Gift of Violence: Practical Knowledge for Surviving and Thriving in a Dangerous World

Children Under Fire: An American Crisis

The Rebel: An Essay on Man in Revolt

No Visible Bruises: What We Don't Know about Domestic Violence Can Kill Us

Why They Do It: Inside the Mind of the White-Collar Criminal

Civil Resistance: What Everyone Needs to Know(r)

Chasing the Scream: The Inspiration for the Feature Film the United States vs. Billie Holiday

A Feminist Theory of Violence: A Decolonial Perspective

The Paper Plate Escape: The Prison Break that Broke the System

A Redemptive Path Forward: From Incarceration to a Life of Activism

Until We Reckon: Violence, Mass Incarceration, and a Road to Repair

The Trial of Lizzie Borden

This Is Ear Hustle: Unflinching Stories of Everyday Prison Life

The Madness of Crowds: Gender, Race and Identity

What Is a Girl Worth?: One Woman's Courageous Battle to Protect the Innocent and Stop a Predator--No Matter the Cost

The Innocent Man: Murder and Injustice in a Small Town

Little Book of Conflict Transformation: Clear Articulation of the Guiding Principles by a Pioneer in the Field

Criminal (In)Justice: What the Push for Decarceration and Depolicing Gets Wrong and Who It Hurts Most

Blood in the Water: The Attica Prison Uprising of 1971 and Its Legacy

From a Taller Tower: The Rise of the American Mass Shooter

Regarding the Pain of Others

The Escape Artists: A Band of Daredevil Pilots and the Greatest Prison Break of the Great War

Our Class: Trauma and Transformation in an American Prison

"Prisons Make Us Safer": And 20 Other Myths about Mass Incarceration

Steps to Success: A Re-Entry Workbook

Batman and Psychology: A Dark and Stormy Knight (2nd Edition)

She Said: Breaking the Sexual Harassment Story That Helped Ignite a Movement

The Black Hand: The Bloody Rise and Redemption of Boxer Enriquez, a Mexican Mob Killer

How Nonviolence Protects the State

Marked for Life: One Man's Fight for Justice from the Inside

Orange Is the New Black: My Year in a Women's Prison

Monster: The Autobiography of an L.A. Gang Member

Writing My Wrongs: Life, Death, and Redemption in an American Prison

The Sun Does Shine: How I Found Life and Freedom on Death Row

The Devil Inside: How My Minister Father Molested Kids In Our Home And Church For Decades And How I Finally Stopped Him

Prison by Any Other Name: The Harmful Consequences of Popular Reforms

From the War on Poverty to the War on Crime: The Making of Mass Incarceration in America

Getting Out & Staying Out: A Black Man's Guide to Success After Prison

Pastels and Pedophiles: Inside the Mind of Qanon

Marking Time: Art in the Age of Mass Incarceration

The Anatomy of Evil

With Honor and Integrity: Transgender Troops in Their Own Words

City of Inmates: Conquest, Rebellion, and the Rise of Human Caging in Los Angeles, 1771-1965

Forensics: What Bugs, Burns, Prints, Dna, and More Tell Us about Crime

Hate in the Homeland: The New Global Far Right

Police Brutality and White Supremacy: The Fight Against American Traditions

The Girl in the Leaves

In the Name of Identity: Violence and the Need to Belong

Inside the Criminal Mind (Revised and Updated Edition)

The Better Angels of Our Nature: Why Violence Has Declined

Criminal Justice: An Overview of the System

The Anatomy of Motive: The Fbi's Legendary Mindhunter Explores the Key to Understanding and Catching Violent Criminals

Ghettoside: A True Story of Murder in America

The Devil You Know: Encounters in Forensic Psychiatry

Federal Prison Handbook: The Definitive Guide to Surviving the Federal Bureau of Prisons

Closing the Slaughterhouse: The Inside Story of Death Penalty Abolition in Virginia