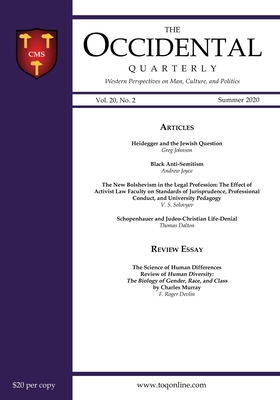 The Occidental Quarterly: Western Perspectives on Man, Culture, and Politics

The Summer, 2020 issue of The Occidental Quarterly contains 5 articles and 136 pages. Counter-Currents editor Greg Johnson leads off with an article on philosopher Martin Heidegger and the Jewish question. Heidegger lived through the National Socialist period during which he had a position as Rector of the University of Freiberg and participated in removing Jewish faculty and students from the university. There is thus reason to suppose that he had anti-Jewish attitudes. However, he wrote very little about Jews. In this essay, Johnson presents these passages along with analysis, concluding that, although Heidegger had thought of National Socialism as anti-modern and thus good, in the end he saw both National Socialism and Jewry as manifestations of modernism-rootless and nihilistic.

Inspired by the recent displays of violence by Blacks against Orthodox Jews in New York, Andrew Joyce explores the general phenomenon of Black anti-Semitism going back to the late nineteenth century, finding that in general Black attitudes regarding Jews are the result of real-world experience with Jews as landlords, store owners, and money lenders. As always, the Jewish response to Black anti-Semitism is to claim innocent victimhood by attributing the causes to other issues-White structural racism, capitalism, Donald Trump, Christianity, etc.

In The New Bolshevism in the Legal Profession, V.S. Solovyev discusses the leftist revolution that has triumphed in elite law schools and how this has affected public debate on issues such as the impeachment of Donald Trump and the Trump's Executive Order on combatting anti-Semitism. As with the academic world generally, movements and ideas flow from the most elite schools-Harvard, Yale, the University of Chicago-down to lesser schools. Law professors from elite law schools are routinely given opportunities to propagate their ideas in the elite media, such as the New York Times and Washington Post, and law professors from elite law schools have been prominent witnesses in Congressional hearings on impeachment.

Thomas Dalton's essay, Schopenhauer and Judeo-Christian Life-Denial, explores the philosopher's general ideas on life as consisting of struggle, strife, and conflict. Relevant to the present struggle faced by those attempting to defend the people and civilization of the West, to live, we must accept the struggle and pain of life, keep our expectations low, press ahead, and hope for the best. Dalton also discusses Christianity, Judaism, and the Greco-Roman attitudes toward life and sexuality.

Finally, F. Roger Devlin provides an essay on Charles Murray's recent book on human diversity. Murray's conclusions, which are well-supported by the most recent research, are that there are biologically based sex differences, that race is real, and that genetic differences are important for understanding social class-conclusions that fly in the face of contemporary orthodoxy.

A Woman's Guide to Cannabis: Using Marijuana to Feel Better, Look Better, Sleep Better-And Get High Like a Lady

This Is the Fire: What I Say to My Friends about Racism

Fear Unmasked 2.0: Killing the Spirit of Fear, Explaining the Great Reset, and Giving You an Action Plan America

Except for Palestine: The Limits of Progressive Politics

Surviving Your Dissertation: A Comprehensive Guide to Content and Process

The Rise of America: Remaking the World Order

Too Famous: The Rich, the Powerful, the Wishful, the Notorious, the Damned

Reading While Black: African American Biblical Interpretation as an Exercise in Hope

Every Minute Is a Day: A Doctor, an Emergency Room, and a City Under Siege

The Cannabis Encyclopedia: The Definitive Guide to Cultivation & Consumption of Medical Marijuana

A Mind of Their Own: Building Your Child's Emotional Wellbeing in a Post-Pandemic World

The Culture of Narcissism: American Life in an Age of Diminishing Expectations

You're Leaving When?: Adventures in Downward Mobility

Face: One Square Foot of Skin

Waking Up: A Guide to Spirituality Without Religion

The Raging 2020s: Companies, Countries, People - And the Fight for Our Future

Chasing Ghosts: A Tour of Our Fascination with Spirits and the Supernatural

The Empathy Diaries: A Memoir

An Ordinary Age: Finding Your Way in a World That Expects Exceptional

Whistling Vivaldi: How Stereotypes Affect Us and What We Can Do

Stewards of Humanity: Lighting the Darkness in Humanitarian Crisis

Controlling Women: What We Must Do Now to Save Reproductive Freedom

The Legend of Zelda 2022 Wall Calendar

Stranger Care: A Memoir of Loving What Isn't Ours

For All the People: Redeeming the Broken Promises of Modern Media and Reclaiming Our Civic Life

Letters to My White Male Friends

A Billion Hours of Good: Changing the World 14 Minutes at a Time

A History of My Brief Body

Being Heumann: An Unrepentant Memoir of a Disability Rights Activist

From Cradle to Stage: Stories from the Mothers Who Rocked and Raised Rock Stars