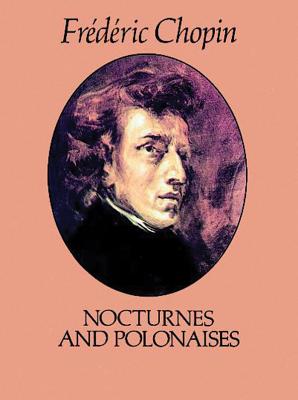 Frédéric Chopin did not attempt to preserve definitive versions of his compositions because he disliked the labor of writing down notes. Improvising his performances at will, he never played a piece the same way twice. As a result, there are numerous texts of any single Chopin work and the editions of these texts have more editorial improvisation than do the texts of most composers. One of the most respected editions was prepared by Carl Mikuli, Chopin's student and, later, his teaching assistant, who was in a particularly privileged and advantageous position to take into account all that the master brought to his playing and teaching. His editorial contributions to this volume reflect his understanding of the principles that underly this body of work, imparted to him in word and deed by the composer.
The 20 nocturnes reproduced here include Opp. 9, 15, 27, 32, 37, 48, 55, 62, 72, and the posthumous Nocturne in C-sharp Minor. The 11 polonaises include Opp. 26, 40, 44, 53, 61,71, and the posthumous Polonaise in G-sharp Minor.
Serious pianists will want to have these authoritative texts of 31 of Chopin's most popular and enduring works.

100 of the Most Beautiful Piano Solos Ever

The Best of Ludovico Einaudi

The Rite of Spring in Full Score

Waltz No. 2: Arranged for Solo Piano

First Lessons in Bach, Complete: Schirmer Library of Classics Volume 2066 for the Piano

Symphonies 1 and 2 in Full Score

The Well-Tempered Clavier: Books I and II, Complete

Easy Renaissance Pieces for Classical Guitar: With a CD of Performances Book/CD [With CD (Audio)]

The Marriage of Figaro

Piano Pieces for the Adult Beginner

Poem of Ecstasy and Prometheus: Poem of Fire: In Full Score

Melodious Double-Stops, Complete Books 1 and 2 for the Violin

The Best of Francisco Tarrega in 33 Pieces for Guitar

Symphonies Nos. 1 and 2 in Full Score

Symphonies Nos. 4 and 7 in Full Score

Classical Fake Book: Over 850 Classical Themes and Melodies in the Original Keys

The Planets in Full Score

A London Symphony in Full Score

The 36 Fantasias for Keyboard

First 50 Classical Pieces You Should Play on the Piano

The Library of Easy Piano Favorites

Prelude to The Afternoon of a Faun

Symphony No. 5: In B-Flat Major in Full Score

The Big Book Of Mozart Life: A Life From Beginning To End And What Happened During The Lifetime: New Celebrity Books

The Renaissance Guitar [With CD]

32 Etudes and 40 Studies for Clarinet

Finlandia and Other Tone Poems in Full Score

The Rückert Lieder and Other Orchestral Songs in Full Score

Hymn to St. Cecilia: Ssatb with Solos A Cappella

The Complete Preludes and Etudes for Pianoforte Solo

A Baroque Ornamentation Tutor for Recorder: For Recorder & Keyboard

Nelson Mass and Mass in Time of War in Full Score

The Heifetz Scale Book for Violin

Fantasia on a Theme of Thomas Tallis: Study score

Symphony No. 8: Symphony of a Thousand