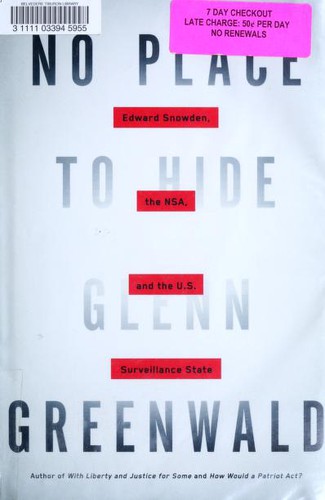 No Place to Hide: Edward Snowden, the NSA, and the U.S. Surveillance State

In May 2013, Glenn Greenwald set out for Hong Kong to meet an anonymous source who claimed to have astonishing evidence of pervasive government spying and insisted on communicating only through heavily encrypted channels. That source turned out to be the 29-year-old NSA contractor and whistleblower Edward Snowden, and his revelations about the agency's widespread, systemic overreach proved to be some of the most explosive and consequential news in recent history, triggering a fierce debate over national security and information privacy. As the arguments rage on and the government considers various proposals for reform, it is clear that we have yet to see the full impact of Snowden's disclosures.

Now for the first time, Greenwald fits all the pieces together, recounting his high-intensity ten-day trip to Hong Kong, examining the broader implications of the surveillance detailed in his reporting for The Guardian, and revealing fresh information on the NSA's unprecedented abuse of power with never-before-seen documents entrusted to him by Snowden himself.

Going beyond NSA specifics, Greenwald also takes on the establishment media, excoriating their habitual avoidance of adversarial reporting on the government and their failure to serve the interests of the people. Finally, he asks what it means both for individuals and for a nation's political health when a government pries so invasively into the private lives of its citizens--and considers what safeguards and forms of oversight are necessary to protect democracy in the digital age. Coming at a landmark moment in American history, No Place to Hide is a fearless, incisive, and essential contribution to our understanding of the U.S. surveillance state.

Powers and Thrones: A New History of the Middle Ages

Children of Ash and Elm: A History of the Vikings

Far Side of the Moon: Apollo 8 Commander Frank Borman and the Woman Who Gave Him Wings

Humane: How the United States Abandoned Peace and Reinvented War

September 11: The 9/11 Story, Aftermath and Legacy

The Storm Before the Storm: The Beginning of the End of the Roman Republic

On the Wings of Geezers: Life Lessons from Old Pilots

The Cambridge Illustrated History of Warfare

Deployment: One of Our Pieces Is Missing

Theory of the Partisan: Intermediate Commentary on the Concept of the Political

Bar Kokhba: The Jew Who Defied Hadrian and Challenged the Might of Rome

The Code Book: The Science of Secrecy from Ancient Egypt to Quantum Cryptography

The Templars: The Rise and Spectacular Fall of God's Holy Warriors

The Last Viking: The True Story of King Harald Hardrada

Gladius: The World of the Roman Soldier

Destined for War: Can America and China Escape Thucydides's Trap?

The Aftermath of Dunkirk

The Long War for Britannia 367-664: Arthur and the History of Post-Roman Britain

Conquests and Cultures: An International History

Rubicon: The Last Years of the Roman Republic

A Drop of Treason: Philip Agee and His Exposure of the CIA

Radicalizing Her: Why Women Choose Violence

The History of the Peloponnesian War: Revised Edition

Men of Terror: A Comprehensive Analysis of Viking Combat

The Cultural Cold War: The CIA and the World of Arts and Letters

Philip and Alexander: Kings and Conquerors

The Compleat Victory: Saratoga and the American Revolution

The Bronze Lie: Shattering the Myth of Spartan Warrior Supremacy

Mirage: Napoleon's Scientists and the Unveiling of Egypt

The Story of the Greeks: A History of Ancient Greece for Children; the Athenians, Spartans, their Cultures, Wars and Gods

The History of the Medieval World: From the Conversion of Constantine to the First Crusade

The Myth of German Villainy

Pacific Rampart: A History of Corregidor and the Harbor Defenses of Manila and Subic Bays

In Love and War, Revised and Updated: The Story of a Family's Ordeal and Sacrifice During the Vietnam Years

Alexander the Great Versus Julius Caesar: Who Was the Greatest Commander in the Ancient World?

The Ethnic Cleansing of Palestine

The Normans: A History of Conquest

Weapon: A Visual History of Arms and Armor

The Ideological Origins of the American Revolution

Bosworth: The Archaeology of the Battlefield

Roster Number Five-Zero: Not for the Weak or Fainthearted

Massoud: An Intimate Portrait of the Legendary Afghan Leader

Armies of the Vikings, Ad 793-1066: History, Organization and Equipment

Running a Thousand Miles for Freedom: Or, the Escape of William and Ellen Craft from Slavery

The African Wars: Warriors and Soldiers of the Colonial Campaigns

A Museum of Early American Tools

Fifty Strong: Four Decades of US Veterans and Families Share Their Combat and Post-War Experiences

Gordian III and Philip the Arab: The Roman Empire at a Crossroads

Army of the Roman Emperors

My Promised Land: The Triumph and Tragedy of Israel

With Zeal and with Bayonets Only: The British Army on Campaign in North America, 1775-1783

The Great War for Civilisation: The Conquest of the Middle East

The March of Folly: From Troy to Vietnam

The Storm Before the Storm: The Beginning of the End of the Roman Republic

Autumn in the Heavenly Kingdom: China, the West, and the Epic Story of the Taiping Civil War

The Wrong Stuff: The Adventures and Misadventures of an 8th Air Force Aviator

Afghanistan: A Military History from Alexander the Great to the War Against the Taliban

Warfare in the Classical World: An Illustrated Encyclopedia of Weapons, Warriors, and Warfare in the Ancient Civilizations of Greece and Rome

The Arab-Israeli Wars: War and Peace in the Middle East

Persian Fire: The First World Empire and the Battle for the West

Forged in War: How a Century of War Created Today's Information Society

The Story of the Bayeux Tapestry: Unraveling the Norman Conquest

The Wars of Justinian I

Sword and Scimitar: Fourteen Centuries of War Between Islam and the West

Carnage and Culture: Landmark Battles in the Rise to Western Power

The Savior Generals: How Five Great Commanders Saved Wars That Were Lost - From Ancient Greece to Iraq

The Codebreakers: The Comprehensive History of Secret Communication from Ancient Times to the Internet

Man Without a Face: The Autobiography of Communism's Greatest Spymaster

In Little Need of Divine Intervention: Takezaki Suenaga's Scrolls of the Mongol Invasions of Japan

Never Greater Slaughter: Brunanburh and the Birth of England

The Eleventh Day: The Full Story of 9/11

Irish Brigade in the Civil War: The 69th New York and Other Irish Regiments of the Army of the Potomac

Medicine Is War: The Martial Metaphor in Victorian Literature and Culture

The German Way of War: From the Thirty Years' War to the Third Reich

Caudine Forks 321 BC: Rome's Humiliation in the Second Samnite War

Logistics of the First Crusade: Acquiring Supplies Amid Chaos

The Remaking of the Medieval World, 1204: The Fourth Crusade

End of Empire: Attila the Hun and the Fall of Rome

The Battleships Fuso and Yamashiro

The Cambridge History of Warfare

The War with Hannibal: Books XXI-XXX of the History of Rome from Its Foundation

The Roman Empire and the Indian Ocean: The Ancient World Economy and the Kingdoms of Africa, Arabia and India

War Is a Force That Gives Us Meaning

Chicken Soup for the Veteran's Soul: Stories to Stir the Pride and Honor the Courage of Our Veterans

Stars in Their Courses: The Gettysburg Campaign, June-July 1963

Genghis Khan: His Conquests, His Empire, His Legacy

By, For, and About Marines: A Book of Notable Quotes of the U. S. Marine Corps.

Faces of Union Soldiers at South Mountain and Harpers Ferry

The Art of War: by Sun Tzu

Army Board Study Guide: Army Board Book and Practice Test Questions for the Army Promotion Board Hearing

Warfare in the Ancient World: From the Bronze Age to the Fall of Rome

Leuctra 371 BC: The Destruction of Spartan Dominance

When Knights Were Bold: Medieval Life; the Military Castles and Crusades, and the Towns, Guilds and Education of the Middle Ages

An Illustrated Encyclopedia of the Uniforms of the Roman World: A Detailed Study of the Armies of Rome and Their Enemies, Including the Etruscans, Sam

Faith of My Fathers: A Family Memoir

Rome's Great Eastern War: Lucullus, Pompey and the Conquest of the East, 74-62 BC

The Falcon and the Snowman: A True Story of Friendship and Espionage

Speed of Advance: How the U.S. Navy's Convergence of People, Process, and Technology Can Help Your Business Win in the 4th Industrial Re

Air Capabilities of the U.S. Navy SEALs: A History of Bravery and Innovation

Scapegoats of the Empire: The True Story of Breaker Morant's Bushveldt Carbineers

Sparta: Rise of a Warrior Nation

The Last 100 Yards: How the Infantry Projects Power & Strength Around the Globe

The Legacy of Conquest: The Unbroken Past of the American West

Sparta: Rise of a Warrior Nation

Shepherds of God in Wolves' Clothing: Random Reflections of a Former Army Chaplain

God's Battalions: The Case for the Crusades

The Roman Emperor Aurelian: Restorer of the World

Battle of Leyte Gulf: The Largest Sea Battle of the Second World War

The Great Partnership: Robert E. Lee, Stonewall Jackson, and the Fate of the Confederacy

The Civil War: A History

Spetsnaz: The Inside Story of the Soviet Special Forces

The Sword in Anglo-Saxon England: from the 5th to 7th century