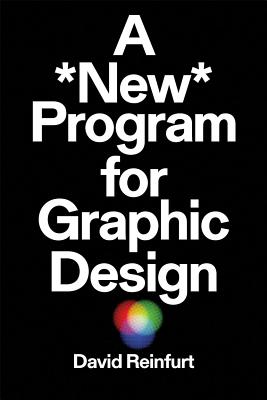 A toolkit for visual literacy in the 21st century

A New Program for Graphic Design is the first communication-design textbook expressly of and for the 21st century. Three courses--Typography, Gestalt and Interface--provide the foundation of this book.

Through a series of in-depth historical case studies (from Benjamin Franklin to the Macintosh computer) and assignments that progressively build in complexity, A New Program for Graphic Design serves as a practical guide both for designers and for undergraduate students coming from a range of other disciplines. Synthesizing the pragmatic with the experimental, and drawing on the work of Max Bill, Beatrice Warde, Muriel Cooper and Stewart Brand (among many others), it builds upon mid- to late-20th-century pedagogical models to convey contemporary design principles in an understandable form for students of all levels--treating graphic design as a liberal art that informs the dissemination of knowledge across all disciplines. For those seeking to understand and shape our increasingly networked world of information, this guide to visual literacy is an indispensable tool. David Reinfurt (born 1971), a graphic designer, writer and educator, reestablished the Typography Studio at Princeton University and introduced the study of graphic design. Previously, he held positions at Columbia University Graduate School of Architecture, Planning and Preservation, Rhode Island School of Design and Yale University School of Art. As a cofounder of O-R-G inc. (2000), Dexter Sinister (2006) and the Serving Library (2012), Reinfurt has been involved in several studios that have reimagined graphic design, publishing and archiving in the 21st century. He was the lead designer for the New York City MTA Metrocard vending machine interface, still in use today. His work is included in the collections of the Walker Art Center, Whitney Museum of American Art, Cooper Hewitt National Design Museum and the Museum of Modern Art. He is the co-author of Muriel Cooper (MIT Press, 2017), a book about the pioneering designer.

The Steal Like an Artist Journal: A Notebook for Creative Kleptomaniacs

Maybe This Will Help: How to Feel Better When Things Stay the Same

How to Revised and Expanded Edition

Colorstrology: What Your Birthday Color Says about You

The End of Print: The Grafik Design of David Carson

Magic Eye: A New Way of Looking at the World, 1

How to Launch a Brand (2nd Edition): Your Step-by-Step Guide to Crafting a Brand: From Positioning to Naming And Brand Identity

Branding Terror: The Logotypes and Iconography of Insurgent Groups and Terrorist Organizations

Soled Out: The Golden Age of Sneaker Advertising

Mexico: The Land of Charm

The Look of the Book: Jackets, Covers, and Art at the Edges of Literature

Get Impressed!: The Revival of Letterpress and Handmade Type

How Design Makes Us Think: And Feel and Do Things

The World in Prints: The History of Advertising Posters from the Late 19th Century to the 1940s

The Art of Titanfall 2

Auto Erotica: A Grand Tour Through Classic Car Brochures of the 1960s to 1980s

The Brand Therapy Book: Key branding lessons to save time and money while winning hearts and minds.

Fast Company Innovation by Design: Creative Ideas That Transform the Way We Live and Work

The Impossibility of Silence: Writing for Designers, Artists & Photographers

Protest!: A History of Social and Political Protest Graphics

Stanley Donwood: There Will Be No Quiet

The New Luxury: Defining the Aspirational in the Age of Hype

Where the Animals Go: Tracking Wildlife with Technology in 50 Maps and Graphics

Handstyle Lettering: From Calligraphy to Typography

The Grand Tour. the Golden Age of Travel

The Legal Design Book: Doing Law in the 21st Century

How Design Makes Us Think: And Feel and Do Things

Branding: In Five and a Half Steps

Signs and Symbols: An Illustrated Guide to Their Origins and Meanings

Draplin Design Co.: Pretty Much Everything

Dot Line Shape: The Basic Elements of Design and Illustration

101 Things I Learned(r) in Advertising School

Creative Strategy and the Business of Design

The Abc's of Triangle, Square, Circle: The Bauhaus and Design Theory

Graphic Design in the Post-Digital Age: A Survey of Practices Fueled by Creative Coding

Book Design: From the Printing Basics to the Most Impressive Designs

How to Launch a Brand - SPECIAL WORKBOOK EDITION (2nd Edition): Your Step-by-Step Guide to Crafting a Brand: From Positioning to Naming And Brand Iden

An Introduction to Service Design: Designing the Invisible

The World Explained in 264 Infographics

Generative Design: Visualize, Program, and Create with JavaScript in P5.Js

Graphic Design in the Twentieth Century: A Concise History

The Bullhearted Brand: Building Bullish Restaurant Brands That Charge Ahead of the Herd

Sh*t They Didn't Tell You: How to Succeed in the Creative Industries

X-Rated: Adult Movie Posters of the 60s and 70s

Collage Techniques: A Guide for Artists and Illustrators

How Do You Want to BE SEEN: A personal brand playbook

The Beauty of Time Travel: The Work of Ramdane Touhami and the Agency Art Recherche Industrie for Officine Universelle Buly

Design{h}ers: A Celebration of Women in Design Today

How Design Makes the World

Mapping by Design: A Guide to Arcgis Maps for Adobe Creative Cloud

100 Posters That Changed the World

Made in Japan: Awe-Inspiring Japanese Graphics

A Designer's Research Manual, 2nd Edition, Updated and Expanded: Succeed in Design by Knowing Your Clients and Understanding What They Really Need

The Art of Winold Reiss: An Immigrant Modernist

Type on Screen: A Critical Guide for Designers, Writers, Developers, and Students

Color Inspirations: More Than 3,000 Innovative Palettes from the Colourlovers.com Community

Brand Thinking and Other Noble Pursuits

Game Changers: The Evolution of Advertising

Positioning for Advantage: Techniques and Strategies to Grow Brand Value

Editing by Design: The Classic Guide to Word-And-Picture Communication for Art Directors, Editors, Designers, and Students

Ad Nauseam II: Newsprint Nightmares from the 1990s and 2000s

The Graphic Design Exercise Book: Creative Briefs to Enhance Your Skills and Develop Your Portfolio

The Monocle Guide to Shops, Kiosks and Markets

Selling Contemporary Art: How to Navigate the Evolving Market

The Art of Cartographics: Designing the Modern Map

Don't Get a Job... Make a Job: How to Make It as a Creative Gradute (in the Fields of Design, Fashion, Architecture, Advertising and More)