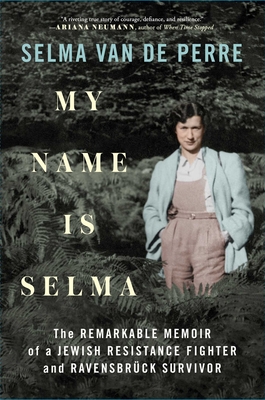 My Name Is Selma: The Remarkable Memoir of a Jewish Resistance Fighter and Ravensbrück Survivor

An international bestseller, this powerful memoir by a ninety-eight-year-old Jewish Resistance fighter and Ravensbrück concentration camp survivor shows us how to find hope in hopelessness and light in the darkness (Edith Eger, author of The Choice and The Gift). Selma van de Perre was seventeen when World War II began. She lived with her parents, two older brothers, and a younger sister in Amsterdam, and until then, being Jewish in the Netherlands had not presented much of an issue. But by 1941 it had become a matter of life or death. On several occasions, Selma barely avoided being rounded up by the Nazis. While her father was summoned to a work camp and eventually hospitalized in a Dutch transition camp, her mother and sister went into hiding--until they were betrayed in June 1943 and sent to Auschwitz. In an act of defiance and with nowhere else to turn, Selma took on an assumed identity, dyed her hair blond, and joined the Resistance movement, using the pseudonym Margareta van der Kuit. For two years Marga risked it all. Using a fake ID, and passing as non-Jewish, she traveled around the country and even to Nazi headquarters in Paris, sharing information and delivering papers--doing, as she later explained, what had to be done. But in July 1944 her luck ran out. She was transported to Ravensbrück women's concentration camp as a political prisoner. Without knowing the fate of her family--her father died in Auschwitz, and her mother and sister were killed in Sobibor--Selma survived by using her alias, pretending to be someone else. It was only after the war ended that she could reclaim her identity and dared to say once again: My name is Selma. We were ordinary people plunged into extraordinary circumstances, Selma writes. Full of hope and courage, this is her story in her own words.

Facing the Lion: Memoirs of a Young Girl in Nazi Europe

Behind the Red Door: How Elizabeth Arden's Legacy Inspired My Coming-of-Age Story in the Beauty Industry

Journey to the Edge of Reason: The Life of Kurt Gödel

In the Land of Wilderness

The Happiest Man on Earth

A Lady's Life in the Rocky Mountains, Volume 14

7 Men: And the Secret of Their Greatness

The Fifties: An Underground History

Up From Slavery: An Autobiography

Blood Brothers: The Dramatic Story of a Palestinian Christian Working for Peace in Israel

The Note Through the Wire: The Incredible True Story of a Prisoner of War and a Resistance Heroine

Bugsy Siegel: The Dark Side of the American Dream

The Last Diving Horse in America: Rescuing Gamal and Other Animals--Lessons in Living and Loving

A Bag of Marbles

Agrippina: The Most Extraordinary Woman of the Roman World

William Still: The Underground Railroad and the Angel at Philadelphia

Competing with Idiots: Herman and Joe Mankiewicz, a Dual Portrait

The Windsor Diaries: My Childhood with the Princesses Elizabeth and Margaret

Eliza Hamilton: The Extraordinary Life and Times of the Wife of Alexander Hamilton

Cheaper by the Dozen

Master of the Senate: The Years of Lyndon Johnson III

Lincoln's Mentors: The Education of a Leader

The Woman Behind the New Deal: The Life and Legacy of Frances Perkins--Social Security, Unemployment Insurance, and the Minimum Wage

The Boy Who Followed His Father Into Auschwitz: A True Story of Family and Survival

The Interesting Narrative and Other Writings