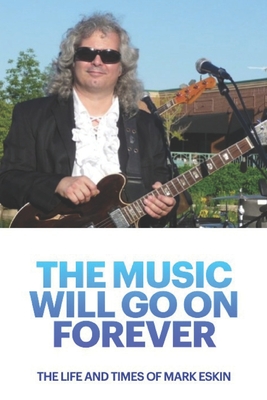 The Music Will Go On Forever: The Life & Times of Mark Eskin

Beatle Mark Eskin was a musician from Chicago who played in Midwestern USA, Los Angeles, California and Liverpool, England. He died at 52 in April 2010 - a shock to many who knew this sweet, meek, kind, musical maven. Mark performed solo with guitar in hand and as a duo with Laurel Savoie. Mark also was in several bands - The New Colony Six, Instant Karma USA, The StingRays, Johnny Starr and the Meteors, The Chauffeurs, The Vacations, Danny Vee and the Houserockers, The Shadows of Night, BYTE, and Yesterday's News. Mark was a fixture at music events and festivals, singing in the halls and the fields. He would often help budding performers and encourage beginners. He was asked to fill-in for players in several bands, like American English, The Niche, Dr. Mark and the Sutures, Band on the Run, The Mop Tops, The Maroons. Mark often sat-in with bands wherever he travelled, on stages and back-rooms everywhere: The Mersey Beatles, The Cryan Shames, Freewheel, and several ensembles at The Fest for Beatles Fans, the Liverpool Beatle Week, and AROTR: Abbey Road on the River. This is the story of his life, recounted by his wife and though messages from those who knew him. There are tons of photos from his life, gigs, and of friends. Look to see if you passed the audition!

Long Road: Pearl Jam and the Soundtrack of a Generation

A Song for Everyone: The Story of Creedence Clearwater Revival

None of This Rocks: A Memoir

Elvis: Still Taking Care of Business: Memories and Insights about Elvis Presley from His Friend and Bodyguard

Swimming with the Blowfish: Hootie, Healing, and One Hell of a Ride

Coming Home to Myself: A Memoir

How to Make It in the New Music Business: Practical Tips on Building a Loyal Following and Making a Living as a Musician

John Prine: In Spite of Himself